Border Patrol agents assigned to the Laredo Sector saved the lives of nearly 700 illegal immigrants this fiscal year while being smuggled into the U.S.

Laredo Sector agents reported the rescues of more than 680 illegal immigrants whose lives were put in danger by cartel-connected human smugglers, according to information obtained by Breitbart Texas from Laredo Sector officials. The rescues occurred along the Rio Grand River, in ranches where migrants attempt to circumvent Border Patrol immigration checkpoints, also in cars, trucks, and 18-wheelers. Officials report that while the number is high, it is actually down nine percent from the previous year in the same period.

In the past week, agents added to their totals in four separate rescue efforts.

Laredo Sector Marine Unit agents rescued five Guatemalan nationals on May 10 who were clinging to branches after being abandoned by their callous human smugglers. The river is currently experiencing rapid currents and deep-water conditions, Laredo Sector officials stated. The Marine Unit agents quickly pulled all five Guatemalans into their boat and took them to the station where they could face prosecution for illegal entry into the U.S. 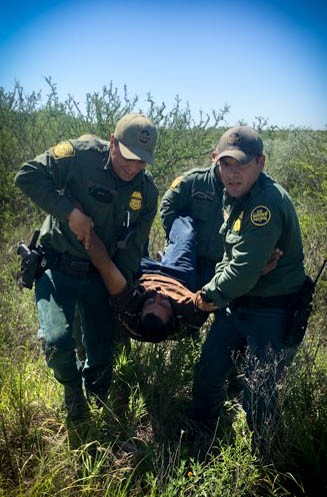 Laredo North agents responded to a call for assistance from an illegal immigrant who became lost on a ranch located northwest of the Texas border town. After being abandoned by his human smuggler and wandering in the brush for three days without food or water, the Mexican national finally called for help on May 9. Agents located the Guatemalan national and found him suffering from dehydration and severe foot blisters. An agent trained in emergency medicine treated the man.

Agents assigned to the Cotulla Station and the Laredo Horse Patrol Unit rescued another illegal immigrant on a ranch located northwest of Laredo. The agents came upon the man while tracking a group of illegal immigrants who had just crossed the border. The agents treated the man for dehydration. The Mexican national also claimed to have been assaulted by his human smuggler. After addressing the man’s immediate medical needs, the agents transported him to a hospital for further treatment.

On May 7, Laredo North agents responded to another call of an illegal immigrant lost on a ranch northwest of Laredo. The call came too late for the man’s cousin, who died from exposure to the harsh conditions in South Texas, officials stated.

After locating the lost migrant, agents assisted the man for dehydration and transported him to a hospital for treatment. Later that day, agents recovered the body of the man’s cousin.

“These events illustrate how the men and women of the United States Border Patrol not only serve to protect our borders, but are also committed to the preservation of life and assist anyone in need,” Assistant Chief Patrol Agent Gabriel H. Acosta said in a written statement.