A federal judge in Houston sentenced a local man to spend more than six years in prison after he attempted to blow up a statue honoring a Civil War Confederate Army lieutenant. The man pleaded guilty to federal charges of attempting to damage property receiving financial assistance.

A federal judge in Houston sentenced 26-year-old Andrew Cecil Earhart Schneck to more than six years in prison following his guilty plea earlier this year, according to FOX26 Houston. A police officer arrested the man after he attempted to blow up a Confederate statue honoring Lt. Richard Dowling. The statue was erected to honors Dowling’s defeat of a Union invasion force at the Battle of Sabine Pass in 1863, Fox reported. The judge also imposed a $10,000 fine.

A park ranger encountered Schneck in almost one year ago after he was found attempting to plant an explosive device at the statue located at Houston’s Herman Park, Breitbart Texas reported. The attempted bombing followed a Black Lives Matter protest earlier in the day at the scene of a different Confederate statue. Protesters that included activists from Black Lives Matter, the Brown Berets, anarchists, communists and Democratic Socialists, along with others from the “Destroy the Confederacy!” movement.

As the suspect came out of the bushes, the ranger observed Schneck holding two small boxes with various items. Those items included duct tape and wires, the FBI agent wrote. After being ordered to place the boxes on the ground, Schneck allegedly pulled out a bottle containing liquid. The ranger said he opened the bottle and attempted to drink from it, but spit some of the liquid out. He then poured the remaining contents on the ground. The ranger contacted Houston Police Department officers who made the arrest. 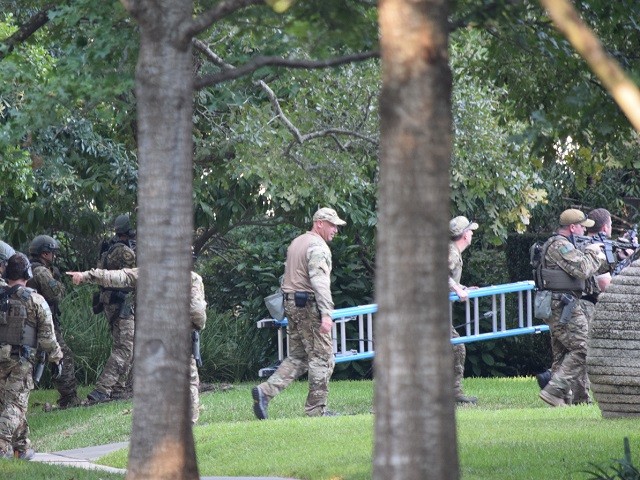 FBI agents execute a search warrant on a home where they suspect bomb-making materials are stored. (Photo: Bob Price/Breitbart Texas)

Breitbart Texas was near the home where Schneck lived with his parents as FBI and ATF agents searched the home for explosives. The search of Schneck’s home revealed items in his possession that “were capable of producing a viable explosive device,” FBI Acting Special Agent in Charge Deron F. Ogletree told reporters. He reassured the public there was no additional threat to the community at this time and asked the public to remain vigilant and report suspicious activity.

This was Schneck’s second encounter with law enforcement regarding explosive devices. In 2013, federal agents raided a property connected to the young man and searched for chemicals that could be used to make “tear gas or nerve gas.” Agents later determined that the material was a military-grade explosive. Following the raid, then-22-year-old Andrew Cecil Earhart Schneck pleaded guilty to one count of storing an explosive in a manner not in conformity with regulations. He was sentenced on August 7, 2014, to five years of supervised release, and was assessed $25.00 and restitution of $159,087.05.

Despite the five year sentence, Judge Nancy K. Johnson released Schneck early from his probation in 2016. Early termination of supervised release is warranted,” the unopposed motion stated, “due to Schneck’s exemplary post-conviction adjustment and conduct, including completing discharging the financial obligations related to this case.” The motion said early termination was warranted because Schneck had “devoted himself to his education and was awarded a Bachelor of Arts from Austin College” and had “matured and his focus is no longer concentrated on high-risk activities.”

In addition to the new prison sentence of six and one-half years in prison, Schneck will also be required to serve an additional three years of supervised release, U.S. District Court Judge Ewing Werlein, Jr. ordered in Friday’s sentencing hearing.

“The high risk conduct of the defendant has now, on two occasions, endangered the public,” Werlein said in a statement reported by the Houston Chronicle. “You cannot count always on getting maximum leniency. You have got to reform your conduct.”