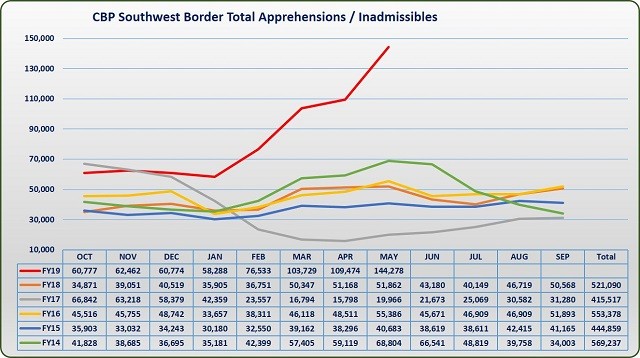 U.S. Customs and Border Protection Chief (CBP) Operating Officer John P. Sanders told reporters on a Wednesday afternoon conference call that Border Patrol agents and CBP officers apprehended 144,278 migrants in May. Over 100,000 of those taken into custody were unaccompanied minors and family units. This represents a 44 percent increase over the April’sapprehensions of families and minors, Sanders said.

“The numbers for May prove the crisis is only getting worse,” Hastings stated. “As of today, the Border Patrol has apprehended, as of this morning, more than 610,000 subjects on the southwest border alone. That’s exceeding the last decade of fiscal year totals… and there’s still four months remaining in this fiscal year.”

“If the current apprehension levels remain the same, we will surpass all physical year totals dating back to 2006,” he explained. “For the month of May, Border Patrol has apprehended over 132,000 subjects on the southwest border alone. That’s an average of 4,285 apprehensions per day.”

Hastings discussed how these numbers differ radically from those in the past due to the demographics of the migrants being taken into custody. “For May, over 36,000 Border Patrol apprehensions were single adults, over 11,000 apprehensions were unaccompanied alien children, a 29 percent increase over our already record numbers in April. Over 84,000 or nearly 64 percent of our apprehensions were family units.”

The May Southwest Border Migration Report, released on Wednesday afternoon by CBP officials, states that Border Patrol agents apprehended 132,887 total migrants in May. Of those, 84,542 were family unit, 11,507 were unaccompanied minors, and 36,838 were single adults.

The Rio Grande Valley Sector continues to be the busiest sector in terms of total migrant apprehensions for May. RGV Sector agents apprehended 49,855 migrants who illegally crossed the border into South Texas in May. Of those, nearly 50,000 were unaccompanied minors and family units.

Hastings said that up to 60 percent of Border Patrol agents are being pulled from law enforcement duties to provide housing, food, and transportation of these migrants. Without help from Congress, Sanders said CBP would exhaust its budget well before the end of the fiscal year.

Border Patrol agents normally witness a drop-off in apprehensions during the summer months, Hastings said in response to a question from the Los Angeles Times. “With the dynamic change in the demographics that we have seen, we’re not seeing any signs of anything dropping off. For the first few days in June, we’re already seeing large groups continue to go up and we’ve had high entry days as well.