Authorities in the border city of Ciudad Juárez, Chihuahua, arrested seven alleged cartel hitmen for “La Línea.” The hitmen are suspected in at least 22 cartel assassinations and three kidnappings in which the victims survived.

State authorities in Chihuahua announced the arrest of seven cartel hitmen for “La Linea” who operate as the armed wing of the Juárez Cartel or El Nuevo Cártel de Juárez. The arrests were made by elements of the Ciudad Juárez municipal police (SSPM) after a police officer patrolling in colonia La Cañada observed an injured and disoriented teen walking along the street. While talking to the injured teen, the officer learned that he had just escaped from a cartel safe house where kidnapped victims were being held. The teen related that he had been held against his will in the safe house for five days.

Police gathered the necessary intel information regarding the safe house and launched a rescue operation after the teen told them that several other kidnap victims were being held in the house by armed gunmen according to government sources. The subsequent raid on the safe house resulted in the arrests of seven cartel operatives identified as Hector R.H. aka, “El Mostro;” Jorge Fernando H.R. aka “El Choche;” Everardo C.P.; Kevin P.B. aka, “El Malilla” or “El Negro;” Juan B.Ch. aka ​​”El Pelón;” and two unidentified juvenile suspects.

During questioning, the suspected cartel hitmen admitted to belonging to “La Línea” and to being responsible for the murder of 22 members of rival criminal groups along with the kidnapping and injuring of three others this month.

The list of homicides that the cartel hitmen admitted to are as follows:

The cartel hitmen admitted they were in charge of recruiting and training operatives including juveniles.

The city of Juarez has been mired in a cartel war primarily between operatives of the Sinaloa cartel and El Nuevo Cártel de Juárez. Most of the victims are dealers of street-level drugs or low-level operatives. These individuals are primarily being supplied methamphetamine by cartel-connected distributors, according to Breitbart law enforcement sources.

Breitbart’s cartel chronicles reported extensively on the ongoing cartel violence in the border city of Juárez which sits immediately across the border from El Paso, Texas. Juárez netted 1,247 homicides in 2018 and has since experienced a steady uptick in cartel killings after experiencing a downward trend.

Below is a comparison of homicide statistics between the two border cities of El Paso and Ciudad Juarez dating back to 2007 to 2018. 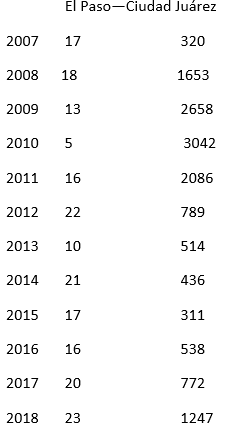