Del Rio Sector Border Patrol agents rescued five migrants from the Rio Grande as they attempted to illegally cross from Mexico into Texas.

Eagle Pass Station agents assigned to river duty on March 15 encountered a family of migrants attempting to cross the Rio Grande. The dangerous crossing by the family, including three children, took place not far from the Eagle Pass Port of Entry where they could have legally crossed and applied for entry into the U.S., according to information obtained from Del Rio Sector Border Patrol officials. 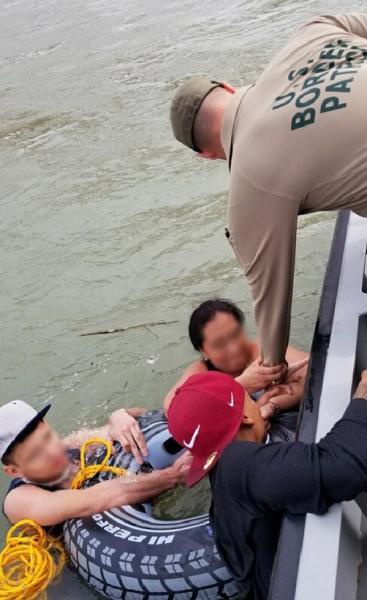 As the agents approached the area, they observed several members of the family struggling to stay afloat, officials stated. The agents moved their boat into position to safely extract the family from the swiftly moving river currents.

“There are many dangers associated with crossing the Rio Grande River illegally. These situations can be avoided by pursuing more appropriate and legal pathways for entry into the United States,” said Del Rio Sector Acting Chief Patrol Agent Doyle E. Amidon, Jr. “If our agents had not reacted in time, this family could have drowned.”

After pulling the mother, father, two daughters and a son from the river, the agents transported them to the riverbank where an EMT agent evaluated their medical condition., officials stated. The agent determined the family was in good health and arranged transportation to the Eagle Pass Processing Center.

The Honduran family will be processed according to current CBP guidelines, officials said.