A top-ranking Sinaloa Cartel operator is believed to have been executed in his home state. Just days ago, he went on the run after being granted supervised release by U.S. prosecutors.

While Mexican authorities have largely remained tight-lipped on the case, Rodrigo “El Chino Antrax” Arechiga Gamboa is believed to be one of three bodies found inside a luxury SUV on Saturday morning in Sinaloa. The other two victims have been identified as Arechiga’s sister Jimena and her partner Juan, Mexico’s Rio Doce reported. 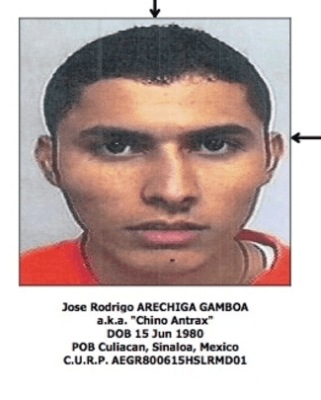 Last week, the U.S. Attorney’s Office in San Diego revealed that Arechiga Gamboa fled from supervised release when they requested a warrant for his arrest. The drug lord was last seen at his home on May 6. The cartel commander was set to serve five years of supervised release as part of a plea agreement with prosecutors following a 2015 guilty plea to multiple drug-trafficking charges, Breitbart Texas reported at the time. Federal authorities had arrested Arechiga Gamboa in Amsterdam in 2013.

After fleeing from U.S. authorities, Arechiga Gamboa returned to Sinaloa, where he had been staying in a territory he once controlled as part of his job as one of the Sinaloa Cartel’s top enforcers. According to Rio Doce, Arechiga was staying at a home in the Guadalupe Victoria neighborhood in Culiacan’s eastern side when a group of gunmen arrived. After a fierce shootout they kidnapped him, his sister, and brother in law, only to kill them and leave the bodies inside an SUV registered to Arechiga’s sister. The gunmen left the bodies on the outskirts of town.

In late March, as the COVID-19 pandemic swept through Mexico, Lopez Obrador traveled to Sinaloa where he briefly met with Guzman Loera’s mother. The videotaped meeting also earned widespread criticism for the president who has claimed in the past that the war on drugs is over.