A Brooks County, Texas, sheriff’s deputy recovered the recently deceased body of a young migrant woman who died after being abandoned by smugglers. The death occurred on a ranch located south of the Falfurrias Border Patrol Checkpoint about 80 miles from the Texas-Mexico border.

Brooks County dispatchers received information on the morning of September 14 regarding the discovery of a deceased woman found by Border Patrol agents assigned to the Falfurrias Station. Dispatchers sent Deputy Elias Pompa to the ranch located near the town of Encino, Texas, and south of the Border Patrol checkpoint, according to information provided by the Brooks County Sheriff’s Office.

Deputy Pompa arrived at the ranch and a Border Patrol agent escorted him and the Justice of the Peace to the scene of the death. The Rio Grande Valley Sector agents escorted the team into the ranch where they found the woman laying on the ground along a telephone pole line pathway, the report indicates. 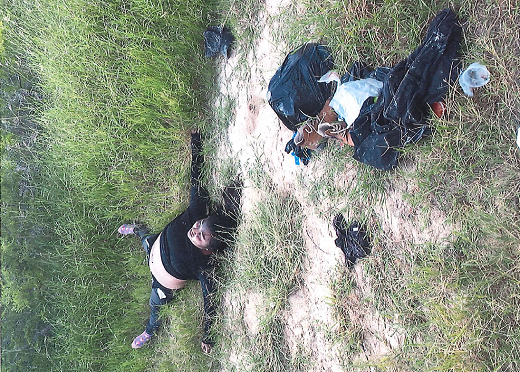 Pompa noted the woman was partially clothed on a long-sleeve black shirt, black pants, and pink socks. He reported her shirt was lifted up to the point where her abdomen was exposed. They found her laying on her back in a spread-eagle position.

A search of the area led to the discovery of a cell phone next to the woman’s head. A pair of eyeglasses were found about three feet away. Also found were a pair of brown boots and a couple of black bags containing food. An opened gallon of water was found near the deceased woman’s body.

As the search continued, the deputy found a Mexican identification card belonging to Mariana Cruz Guarneo, a 20-year-old from Ixtacamaxtitlan, Puebla. It is not known if the card belongs to the decedent.

A funeral home took possession of the woman’s body and will provide transportation to the Webb County Medical Examiner’s Office in Laredo, Texas. There, Dr. Corrine Stern will conduct an autopsy and make a positive identification of the deceased woman.

“This is the 28th person to be found dead in Brooks County so far this year,” Brooks County Sheriff Benny Martinez told Breitbart Texas in a phone interview. “These callous human smugglers have no regard for human life and will simply abandon these people if they fall behind and leave them to die.”

So far this year, at least 247 migrants have been found dead along the U.S. southwestern border with Mexico. Ninety-two of those deaths occurred on or near the Texas border, according to a report by the International Organization for Migrations’ Missing Migrant Project.