ROMA, Texas — Video shot on April 14 shows hundreds of migrants being smuggled across the Rio Grande. Within a few hours around midnight, nearly 300 were brought across the river using inflatable rafts. The groups consisted of family units and unaccompanied children looking to surrender to the few remaining Border Patrol agents near the edge of the small town.

The smugglers faced no resistance from law enforcement during their crossings. Border Patrol is struggling to keep pace in the area. Breitbart Texas captured exclusive footage of a smuggler bringing one of many groups across the dark river. Migrants were provided life vests which were reused throughout the night.

The migrants gathered into groups on the United States-side of the river to walk nearly a mile to Roma to surrender. From there, the few Border Patrol agents available took minimal biographic data, inventoried property, and loaded the migrants onto buses destined for the processing center in Donna, Texas. 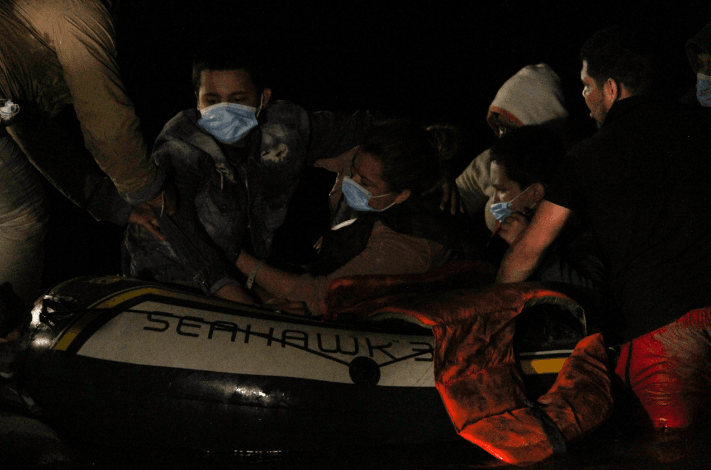 Midway through the footage, a man in a dark blue or black shirt can be seen using a flashlight to direct foot traffic to agents. He is visibly armed with a pistol on his right hip. He serves as a pastor on both sides of the Rio Grande.

Border Patrol agents in the vicinity spoke of being overwhelmed by the crossing volume in such a short time-frame. Many of the migrants appeared nervous and tired from the journey. According to a few of the agents who spoke on a condition of anonymity, this is now an almost a nightly event.

With each inflatable raft, the wails of infants and children could be heard. The expressions on the migrants’ faces varied from worry to relief. With each raft, family units and unaccompanied children disembarked. Some consisted of mother and father. Others were single parents with children.

Residents spoke about their frustration with the sudden influx of migrants impacting their daily lives. One on Peter Street said sleep was hard to come by lately.

“Last week, there appeared to be almost 500 crossing daily. This week it’s a little better,” she said. Her home sits on the hilltop where the migrants surrender to Border Patrol. Within feet of her home, they provide minimal biographic information and are loaded on buses.

The woman, who did not wish to be identified, said her family feels safe while the Border Patrol is nearby but has discovered some migrants hiding in her yard. She says the constant noise of the buses disrupts her family’s sleep.

The armed pastor, Luis Silva, of the Bethel Mission Outreach Center, expressed the same frustration. He appears with volunteers almost nightly to provide water along the walkway to where they will surrender. He empathizes with the migrants, but believes the root cause of the recent influx is related to policies which reduce immigration consequences and enforcement.

“Walls will work, but not if you fail to have adequate policies and laws behind them,” he explained. He says the risks that the migrants take crossing the river should not have to happen. “There is a right way to come into the country and this is not the way,” he added.

As the night unfolded, migrants gathered on the river’s edge waiting for others to cross. Once most had arrived, they marched along the brush trails and ranch roads to the hilltop. Many have only a few belongings and must carry infants and children.

Once processed by Border Patrol, all will be released and expected to inform immigration courts near their destinations about their arrival. This expedited manner of processing and release does not place the migrants in formal removal proceedings but relies on an honor system to avoid overcrowding Border Patrol stations.