DEL RIO, Texas — The Biden administration reopened the infamous outdoor detention area that once held 15,000 mostly Haitian migrants for processing and transport. According to a source within U.S. Customs and Border Protection, Border Patrol officials detained more than 100 mostly Central American migrants under the Del Rio International Bridge on Saturday as overnight temperatures fell into the low 50s.

The source, not authorized to speak to the media, told Breitbart Texas some 1,500 migrants are also being detained in temporary holding cells at several Border Patrol stations within the Del Rio Sector. The overcrowding of facilities is once again impeding the Border Patrol in Del Rio from rapidly transporting migrants into detention facilities from border crossing points. 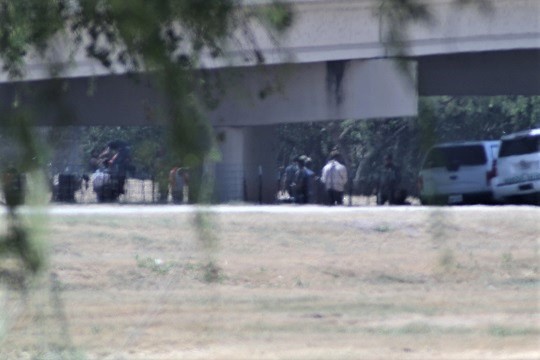 The overflow staging area drew international attention in September as officials held more than 15,000 mostly Haitian migrants in the outdoor facility in filthy conditions. The source says that incident began in a similar manner to the situation on Saturday.

“It all started by using the area to stage temporarily as we wait for transport,” the source explained. “That evolved from a few hours, into one night, and then eventually several weeks.”

Less than two months into the new fiscal year, Border Patrol agents apprehended or arrested more than 180,000 migrants, according to sources within CBP. One unofficial report, reviewed by Breitbart Texas, showed nearly 160,000 migrants were apprehended in October. The number of apprehensions is up dramatically from October 2020 when agents apprehended only 69,032 — an increase of nearly 129 percent.

The Del Rio Sector ranks second in the nation in migrant apprehensions, only behind the Rio Grande Valley Sector, according to CBP reports. The apprehension of numerous large migrant groups within the Del Rio Sector recently is compounding the logistical problems currently facing the agency.

In one single event, a group of nearly 200 mostly Central American migrants crossed the Rio Grande near Normandy, Texas, just thirty miles away from Del Rio. According to the source, a large portion of the detained population at Del Rio Border Patrol stations consists of single adult migrants. The Border Patrol relies on ICE to find suitable, longer-term detention spaces for the single adult migrants and is also a complicating factor that adds to the overcrowding at temporary processing centers.

The use of the outdoor detention area for staging at this point could foreshadow further complications as an average of 5,000 migrants reach the southern border daily according to the source. In addition to the regular flow of migrants across the border, a large, organized caravan of migrants is slowly moving through Mexico prompting actions by Texas Governor Greg Abbott to block common crossing points in the Del Rio Sector.