A report credited to U.S. Customs and Border Protection (CBP) officials by Fox News shows that the number of Border Patrol agents who could be terminated under President Joe Biden’s vaccine mandates could exceed 50 percent of the workforce. This comes amid the record-setting apprehension of migrants illegally crossing the border from Mexico.

Fox News published a leaked document they say came from a source within U.S. Customs and Border Protection showing that as many as 50 percent or more of the nation’s Border Patrol agents could be terminated from their jobs under Biden’s vaccine mandate. The report shows a worst-case scenario whereby 11,523 of the 19,536 Border Patrol agents could face removal. The scenario assumes the agents who have yet to respond to the vaccination survey have also not been vaccinated. 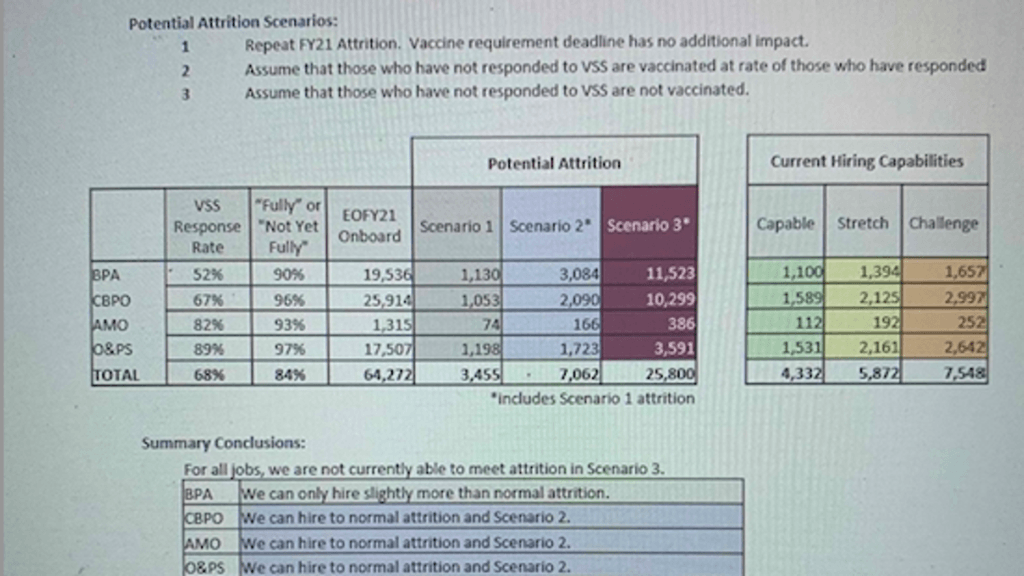 CBP laid out three scenarios regarding the officers who have yet to report their status. The vaccine mandate may not increase attrition from Fiscal Year 2021 levels (scenario 1), in which case the agency would lose about 1,130 agents, dropping the force of 19,536 to 18,403. Alternately, agents who have not yet responded will have gotten vaccinated at the same rate as those who have responded (scenario 2), so the agency would lose 3,084 agents, leaving the force with 16,452 agents.

In the worst-case scenario, agents who have not reported their status have done so because they refuse to take the jab, and so they will be terminated (scenario 3). In that case, net attrition could exceed 11,523 agents, leaving a mere 8,013 border agents on patrol.

This threat to fire unvaccinated Border Patrol agents comes as the agency is forced to deal with record-setting levels of illegal migration across the southwest border with Mexico. During Fiscal Year 21, a record-setting two million migrants were either apprehended by Border Patrol agents or escaped apprehension, Breitbart Texas reported in October. Since that time, a CBP document leaked to Breitbart News shows nearly 160,000 migrants were apprehended by agents in October and 50,000 more were classified as “got aways.”

“We cannot afford at this time — during the biggest crisis as far as border security goes — we can’t afford to lose any of our employees,” National Border Patrol Council President Brandon Judd said during a virtual press conference with Sen. Marsha Blackburn (R-TN) reported by Breitbart News in October. “If we lose even a couple of those people, it’s a couple too many as far as the border goes today.”

A leaked image reviewed by Breitbart News in mid-October shows the Vaccination Status System set up by CBP officials to monitor those agents who have been vaccinated.

Brandon Judd added that the union, which that represents the more than 19,000 men and women of the U.S. Border Patrol, will “vigorously pursue” any cases where the agency denies a medical or religious exemption to the mandate.