Kenosha County, Wisconsin, prosecutors filed criminal charges Thursday against Kyle Rittenhouse, 17, for first-degree murder in the shooting of two people during the unrest in Kenosha on Tuesday night. He faces life in prison if convicted.

In both alleged murders, the complaint describes Rittenhouse being attacked first, suggesting he may claim self-defense.

He is also charged with attempted murder for the shooting of another man, who was allegedly holding a handgun at the time.

Daily Caller reporter Richard McGinnis, who administered first aid to the first man shot, is a key witness in the complaint.

The complaint describes the shootings in detail: 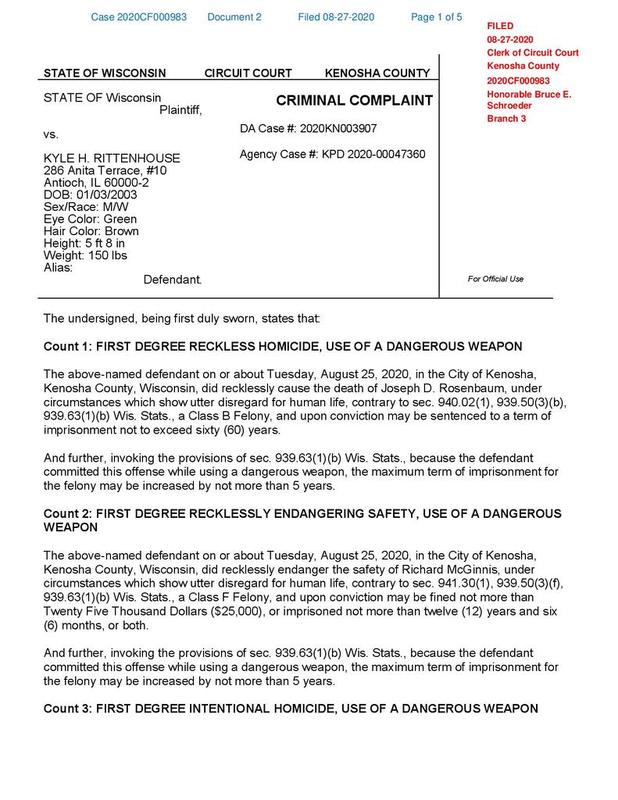 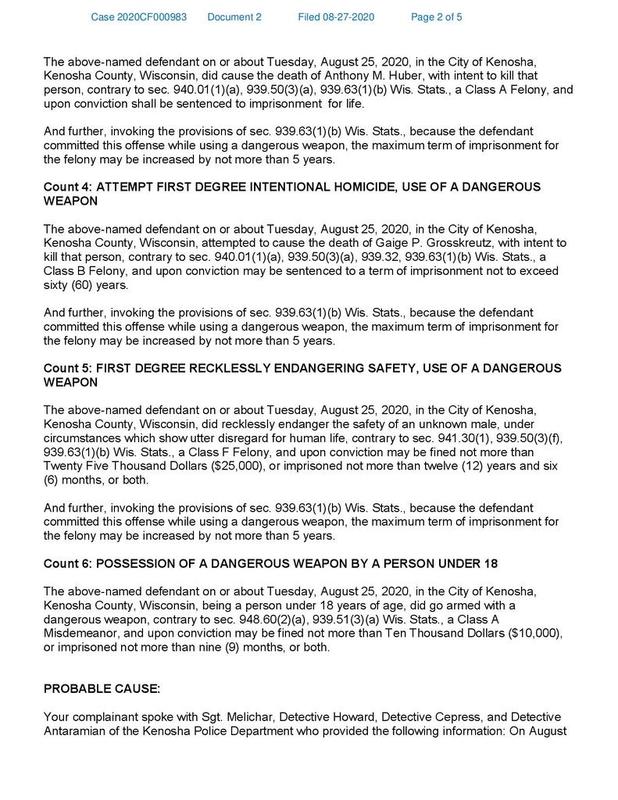 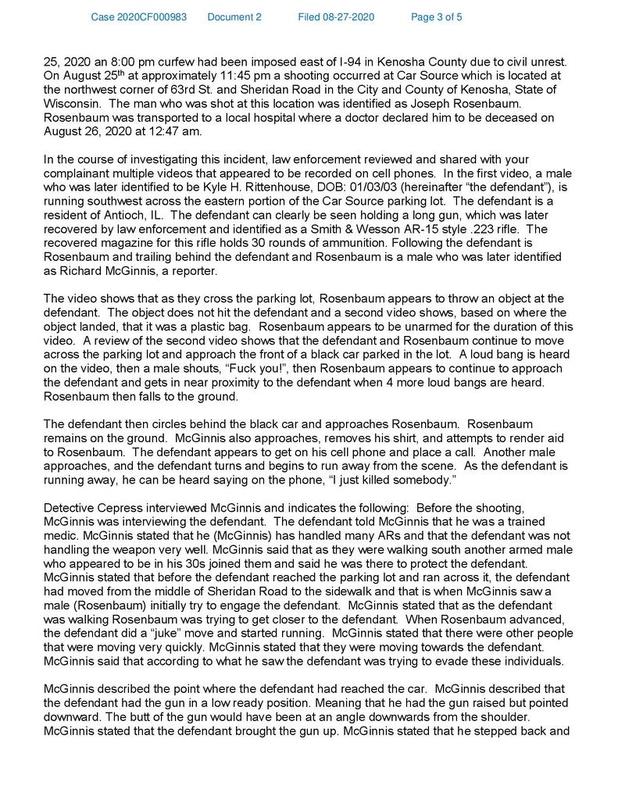 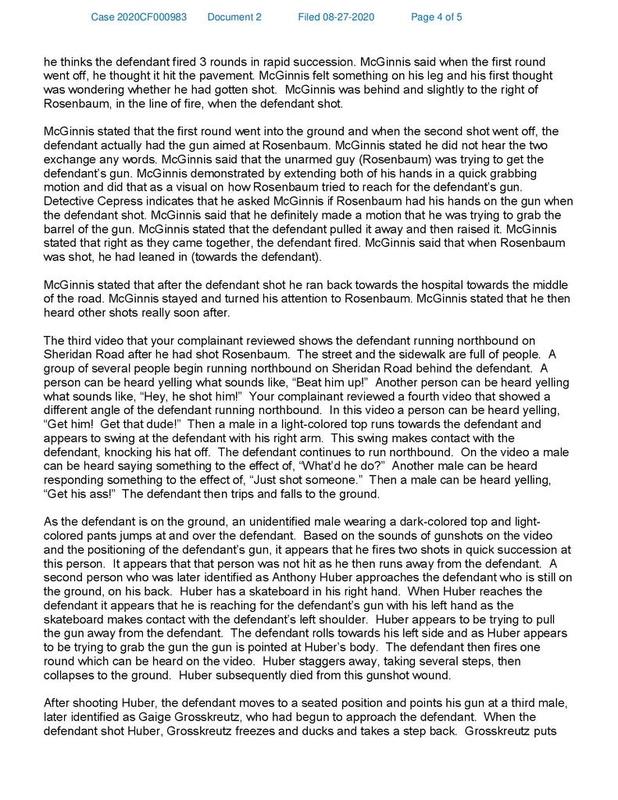 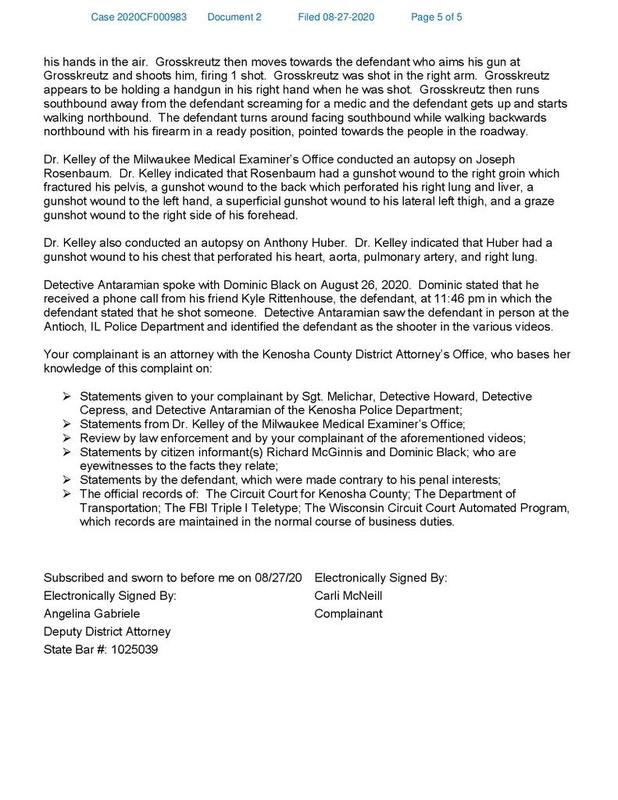 McGinnis adds that he had just spoken to Rittenhouse and advised him that he was not handling his weapon well when Rosenbaum and other people began chasing Rittenhouse. No provocation for the pursuit is described in the pursuit.

The complaint then describes Rittenhouse running away from a large group of people, some of whom were attacking him and shouting things such as, “Get him! Get that dude!” and “Beat him up!” During the melee, the second man shot and killed, Anthony Huber, is described as having attacked Rittenhouse with a skateboard after the latter had fallen to the ground. Huber is also described as having attempted to grab Rittenhouse’s gun before being shot once and later dying from that wound.

A third man, Gaige Grosskreutz, is also described as having approached Rittenhouse. At first, according to the complaint, Grosskreutz raised his hands in a gesture of surrender, then continued approaching and appeared to be holding a handgun. He was then shot in the right arm.

Rittenhouse also faces a charge of recklessly endangering safety through the use of a dangerous weapon, based on the claim that McGinnis was in the line of fire when Rittenhouse first shot his attacker. According to the complaint, McGinnis thought he himself may have been shot at the time. Another charge of recklessly endangering safety refers to an unknown individual who is described as having been in the line of fire later in the confrontation.

Rittenhouse is also charged with a firearms violation for possession of a dangerous weapon under age 18, with a minimum penalty of nine months in jail. He faces six criminal counts overall.

On Friday, Rittenhouse is scheduled to appear in court in Lake County, Illinois, for an extradition hearing that will allow him to be tried in Wisconsin. He is a resident of Antioch, Illinois.