Boudin, the son of a convicted Weather Underground militant, was elected in 2019 on a promise to pursue criminal justice reform, like his predecessor, George Gascón, the George Soros-backed prosecutor who is now D.A. in Los Angeles County.

(Gascón recently unveiled policies “allowing juveniles to potentially avoid prosecution for a host of violent crimes, including robbery, burglary, arson, sexual battery and assault without the use of a firearm,”  the Los Angels Daily News reported.)

Breed had been among the first mayors nationwide to embrace the “defund the police” movement, proposing last year to cut $120 million from law enforcement to organizations in the black community.

But last week, she said: “It is time for the reign of criminals to end. It comes to an end when are more aggressive with law enforcement & less tolerant of all the bullsh*t that has destroyed our city.” She declared a “state of emergency” in the Tenderloin, where open-air drug abuse is rampant. 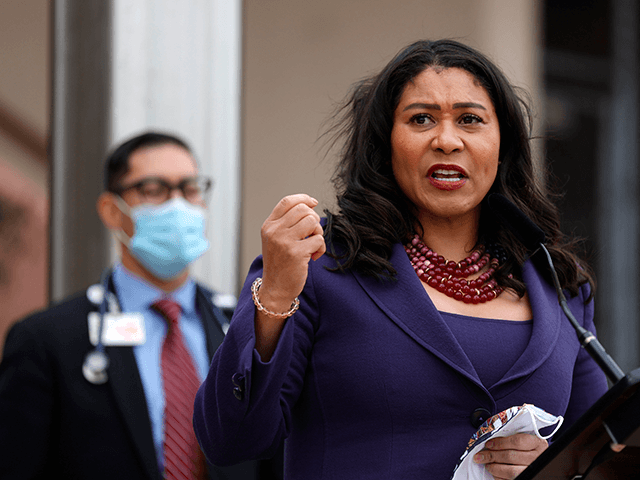 Many around the nation were surprised and delighted, given that twelve major Democrat-governed cities have hit new homicide records and violent crime is out of control in the wake of the Black Lives Matter protests and police “reforms.”

But Boudin joined a group of local officials Monday who declared their opposition to Breed’s new plan to tackle crime.

Boudin, Board of Supervisors President Shamann Walton and Public Defender Mano Raju said at a news conference Monday that the plan was flawed because it relied on failed policies to deal with problems.

Boudin said during the news conference that he is “outraged” at the human suffering, flagrant violations of laws and safety concerns faced by families in the Tenderloin. But he also said, “We can’t arrest and prosecute our way out of problems that are afflicting the Tenderloin.

“Arresting people who are addicted to drugs, jailing people who have mental health struggles, putting folks who are vending hot dogs or other food on the streets in cages will not solve these problems, and they are certainly not the only tools available,” he said.

“Right now in San Francisco it’s easier to get high than it is to get help. That has to change,” he said. “I will do everything in my power to make the Tenderloin safe for all of San Francisco.”

Boudin came to office promising not to prosecute so-called “quality-of-life” crimes like public urination — a sharp contrast to the “broken window” policing that many believe helped clean up cities like New York in the 1990s.

The latter theory holds that prosecuting minor crimes discourages major ones, sending a positive signal about the presence of law enforcement and punishing people who might otherwise be inclined to commit more serious offenses.

Boudin and Gascón represent a new cohort of left-wing prosecutors around the nation who are committed to reducing prison sentences and incarceration rates, largely because of racial disparities. Crime has risen in many cities where they are in office.