The Secret Service has found hundreds of documents it previously denied having in relation to the probe into Hunter Biden’s alleged gun violations, conservative watchdog Judicial Watch revealed Thursday.

Judicial Watch has been investigating if the Secret Service protected Hunter from scrutiny after the president’s son revealed in a 2019 text message the FBI got involved in the case of a missing firearm tossed in a Delaware dumpster by Hunter’s former sister-in-law-turned-lover. Nobody was charged with wrongdoing, according to reports.

Text messages purportedly from Hunter reveal what appears to be a contradiction in an official Secret Service statement, which claims the agency had “no involvement” in an alleged case involving Hallie Biden finding a gun “inside of Hunter Biden’s pickup” and tossing “it in a trash can behind a grocery store where they frequently shopped.” Yet Hunter’s text messages say “the police the FBI the Secret Service came on the scene.”

The gun store owner who sold the weapon to Hunter reportedly refused to supply the paperwork to the Secret Service when they allegedly sought to retrieve it at the time of the incident, suspecting the agency’s officers would keep the documents away from scrutiny.

Hunter has also allegedly made false statements on a gun purchase background check ATF form 4473. Conveying false inflation to ATF on form 4473 carries a fine of up to $250,000 and up to ten years in prison. 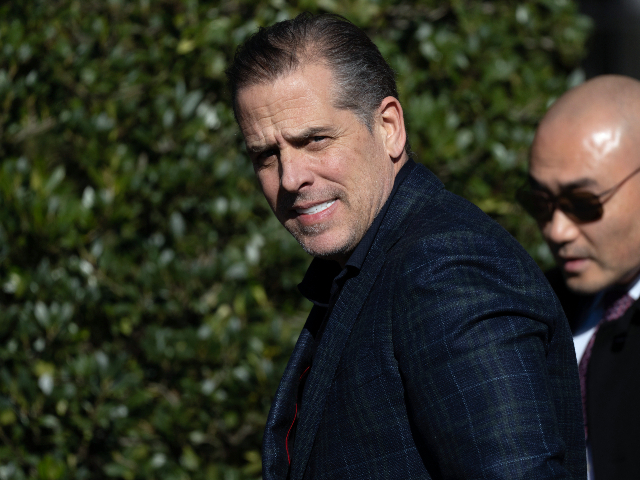 Hunter Biden walks along the South Lawn before the pardoning ceremony for the national Thanksgiving turkeys at the White House in Washington, Monday, Nov. 21, 2022. (AP Photo/Carolyn Kaster)

Judicial Watch has sued the Secret Service for all documents related to the firearm owned by Hunter.

The conservative watchdog has accused the agency of repeatedly changing its position on its possession of inflation related to Hunter’s potential gun violations. “The Secret Service’s changing story on records raises additional questions about its role in the Hunter Biden gun incident,” Judicial Watch President Tom Fitton said in a press release.

“The Secret Service now says it now located over 100 records, totaling over 400 pages and will complete its initial processing of the records by January 9, 2023,” he said:

But then, on November 10, 2022, the Secret Service informed the District Court that it has run supplemental searches and has located over 100 records, totaling over 400 pages, potentially responsive to Judicial Watch’s request.

The Secret Service also told the court that it would complete its initial processing of all potentially responsive records by January 9, 2023, and send records out for any necessary consultations with other Executive Branch entities by that date. All other non-exempt, responsive records are to be produced to Judicial Watch by January 9.

Hunter is under investigation by Joe Biden’s Justice Department for tax and gun related violations. Hunter’s drug abuse could be a scapegoat the defense could successfully use to defend the president’s son against potential charges, the Wall Street Journal reported.

“The idea that we still allow semiautomatic weapons to be purchased is sick,” Biden reporters. “It’s just sick. It has no, no social redeeming value. Zero. None. Not a single, solitary rationale for it except profit for the gun manufacturers.”

In 2018 and 2020, Breitbart Senior Contributor and Government Accountability Institute President Peter Schweizer published Secret Empires and Profiles in Corruption. Each book hit number one on the New York Times bestseller list and exposed how Hunter Biden and Joe Biden flew to China aboard Air Force Two in 2013 before Hunter’s firm inked a $1.5 billion deal with a subsidiary of the Chinese government’s Bank of China less than two weeks after the trip. Schweizer’s work also uncovered the Biden family’s other vast and lucrative foreign deals and cronyism.

Breitbart Political Editor Emma-Jo Morris’s investigative work at the New York Post on the Hunter Biden “laptop from hell” also captured international headlines when she, along with Miranda Devine, revealed that Joe Biden was intimately involved in Hunter’s businesses, appearing to even have a 10 percent stake in a company the scion formed with officials at the highest levels of the Chinese Communist Party.