The virtual fence PR strategy successfully diverted public demand for an effective border barrier for several years, while also allowing a continued inflow of migrant workers and consumers into the U.S. economy.

But the strategy also wrecked the public’s trust in the establishment’s much-declared promise to block migration — and so it helped elect anti-establishment President Donald Trump in 2016.

The “virtual fence” idea is being revived as Democrats search for a PR strategy that would allow them to block any wall while also displaying concern about the rising wave of cheap-labor migrants that is flowing into the nation’s blue-collar jobs, schools, and welfare rolls. “The positive, shall we say, almost technological wall, that can be built is what we should be doing,” House Speaker Nancy Pelosi said January 10.

The strategy is needed because Democrats want to welcome migrants and want to oppose a wall because it would help curb migration. On January 4, for example, House Speaker Nancy Pelosi said that a wall “is an immorality — it builds walls in peoples’ minds about who should come here.”

“The argument we sometimes hear from people who say they want border security but really aren’t serious about it is ‘Oh, we’ll just have drones and sensors,'” Kansas Secretary of State Kris Kobach told SiriusXM Patriot’s Breitbart News Sunday. He continued:

The New York Times reported the failure of the virtual fence project in 2011:

The Department of Homeland Security on Friday canceled a project to build a technology-based “virtual fence” across the Southwest border, saying that the effort — on which $1 billion has already been spent — was ineffective and too costly.

Janet Napolitano, the homeland security secretary, said she had decided to end the five-year-old project, known as SBI-Net, because it “does not meet current standards for viability and cost effectiveness.” In a statement, Ms. Napolitano said border agents would instead use less expensive technology that is already part of their surveillance equipment, tailoring it to the specific terrain where they will be scouting for illegal border crossers and drug traffickers.

Ms. Napolitano’s decision brought a long-expected close to a project carried out by the Boeing Corporation under a contract first signed in 2005 under President George W. Bush, which had been plagued by delays and cost overruns. Originally estimated to cost more than $7 billion to cover the 2,000-mile length of the border, it was the subject of more than a dozen scathing reports by the Government Accountability Office.

The virtual-fence program was approved by business-first Republicans and by pro-migration Democrats as public pressure forced Washington to pass the Secure Fence Act of 2006. The act authorized the construction of 700 miles of double-layer fencing along the border as more than 1 million migrants annually crossed the border in search of cheap-labor jobs in 2005, 2006 and 2007. The inflow of cheap workers and consumers stimulated Bush’s economy and helped to inflate the housing bubble.

Congress and the Bush administration welcomed the migrants, and in 2007, gutted construction fund for the border fences. In its place, they promised to build the “virtual fence” of sensors and drones. From 2007 to 2015, as the $1 billion “virtual fence” was deployed and canceled, Congress spent only $2.5 billion on real fences and supporting projects, according to a 2017 report by the Government Accountability Office.

Even as Napolitano canceled the $1 billion SBI-Net project in 2011, she promised a new and improved “virtual fence” while minimizing the effectiveness of a border fence.

But her 2011 report, however, included a chart which showed that a fence — not sensors — dramatically reduced the cross-border flow of migrants. 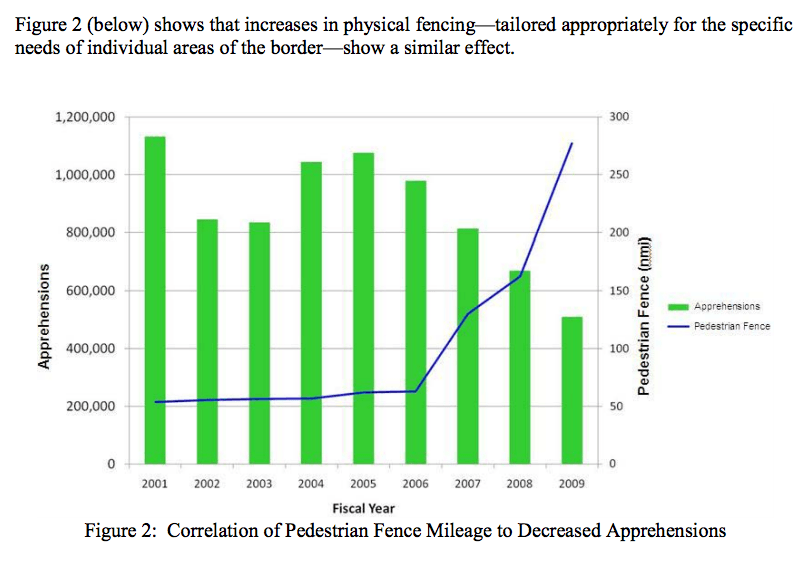 For example, after the 2014 spike in Central American migration, the GOP-run Congress pushed two bills in 2015 which promised to guard the border with sensors. The Center for Immigration Studies reported:

On January 6, the DHS Office of Inspector General issued a report panning use of unmanned aerial aircraft (“drones” in the vernacular). In a press release accompanying the report (“CBP Drones are Dubious Achievers”) the OIG states, “After spending eight years and hundreds of millions of taxpayer dollars, U.S. Customs and Border Protection (CBP) has yet to prove the value of its Unmanned Aircraft System (drone) program while drastically understating the costs.” Then, to put a fine point on the findings of his office, DHS Inspector General John Roth appeared on C-SPAN’s “Washington Journal” television show shortly after the report’s issuance. Roth said that CBP has already spent $360 million on the drone program over the past eight years, breaking down to about $12,000 per hour — and yet has proven ineffectual for the 150 miles of border being surveilled with the aircraft.

Despite this, and Republican majorities in both chambers in the new Congress, two immigration-related bills that include funding for drones are moving through the House of Representatives — which retains the same old stale leadership incapable of reining in presidential overreach or restoring any kind of integrity to immigration law enforcement, whether at the border or in the interior.

Congressional leaders seem to be going through the motions simply to keep their more restive members from overt rebellion, meanwhile hoping the whole issue will just go away. (It won’t.)

But in this winter of our discontent, throwing good money after bad appears to be the congressional leadership’s method of appeasement du jour, at least where immigration is concerned. It’s a way of trying to buy their way out of meaningful solutions or confronting, head-on, the administration’s determination to effectively eliminate borders.

One year later, in 2016, New York real-estate investor Donald Trump swept aside the bipartisan establishment and was elected President of the United States.

Nationwide, the bipartisan establishment’s economic policy of using legal migration to boost economic growth shifts wealth from young people towards older people by flooding the market with cheap white-collar and blue-collar foreign labor. That flood of outside labor spikes profits and Wall Street values by cutting salaries for manual and skilled labor of blue-collar and white-collar employees.