President Joe Biden’s pro-migration policy is so unpopular that it is flipping multiple congressional swing districts towards GOP candidates, according to two polls funded by the Heritage Action.

For example, 55 percent of swing-voting independents blame Biden for the migrant wave, 48 percent said it would make them less likely to vote for a Democrat, and 67 percent oppose the removal of the border wall, according to the two polls, each of 1,200 people. That is good news for GOP candidates because GOP voters overwhelmingly blame Biden and support the border wall.

But the polls largely dodged hot-button questions about the impact of migration on Americans’ jobs, wages, and housing costs. Instead, the questions provide campaign talking points for GOP politicians who want to denounce Biden’s migration policy — without promising to back the beneficial immigration reforms that are opposed by the GOP’s major donors or local business leaders.

The talking points tested the unpopularity of questions that are so unpopular that GOP politicians get no praise for opposing them.

For example, 76 percent of independent voters strongly oppose illegal voting by illegal migrants, and 77 percent support barring migrants who commit asylum fraud, according to the polls.

The polls also showed that 77 percent of independents agreed that “It’s unfair for illegal immigrants to get social services ahead of American citizens,” and 60 percent believe “The surge of illegal immigrants entering the country has become a serious public safety issue because some are violent criminals running from law enforcement in their home country. ”

The poll also shows that 64 percent of independents want migrants to learn English before becoming citizens. But even amnesty advocates promise to include English tests in amnesty bills.

And the Heritage Action questions did not ask Americans about money and migration, even though other polls show intense GOP and swing-voter opposition to labor migration.

For example, the Heritage Action polls did not ask if voters favor current rules that allow coastal investors to fill jobs with newly arrived migrants in coastal states instead of pressuring the investors to move more of their job-creating worksites to interior states. The polls also did not ask voters if higher housing prices are worth the inflow of more migrants or if universities should be required to put American students into crowded classes and programs ahead of visiting foreign students.

The Heritage Action questions “ignore one of the biggest concerns that people have, which is the distortion of the labor market” caused by the government’s policy of importing foreign workers, said Jessica Vaughan, the director of policy studies for the Center for Immigration Studies. “They talk about [government spending] costs, but they don’t talk about the effects on jobs and wages — they’re still locked into this old-school establishment approach to the immigration issue which ignores the labor effects,” she said.

“There are not too many deep-pocketed Republican donors who want to find that kind of research,” she added.

In contrast, the Republican Study Committee is following the money in the immigration debate, said Vaughan.

The committee talking points are “a good sign of the future,” said Vaughan, adding:

It shows that there are some in the Republican establishment and leadership who have woken up to the salience of this issue among voters and that they can actually expand support for the party by pursuing this agenda that resonates so deeply with Americans. They’re going after the Trump base, which is smart and good for the party.

Many polls have shown that GOP voters and swing voters strongly oppose labor migration — and they also underestimate how much immigration is disliked by other Americans.

For many years, a wide variety of pollsters have shown deep and broad opposition to labor migration and the inflow of temporary contract workers into jobs sought by young U.S. graduates. This opposition is multiracial, cross-sex, non-racist, class-based, intra-Democratic, rational, and recognizes the solidarity that Americans owe to each other.

Roughly 5o percent of respondents in both polls said they want immigration slashed from roughly one million per year down to less than 250,000 per year — or just one legal immigrant for every sixteen of the four million Americans who turn 18 each year. 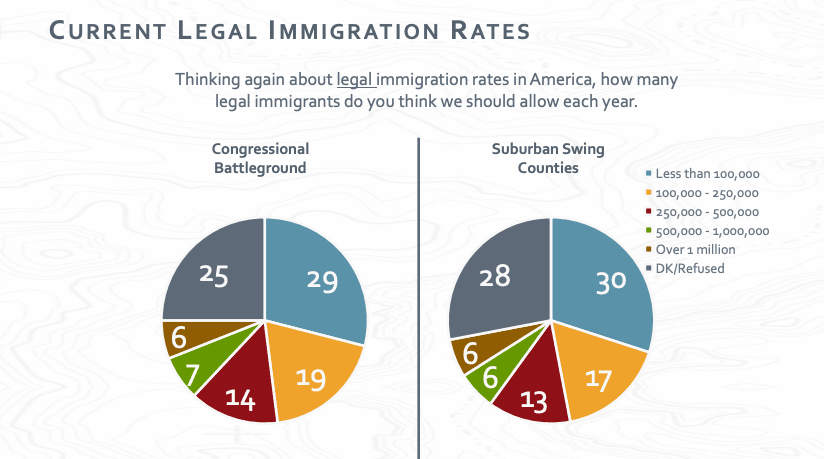 The Heritage Action numbers are a match for the Rasmussen Index, which tracks Americans’ attitude towards migration. For example, Rasmussen’s latest data shows that 39 percent of all likely voters want legal migration numbers halved to 500,000 or fewer.

That reform would be a reversal of President George H. Bush’s 1990 immigration law because it would force investors and CEOs to hire, pay, and train Americans at higher levels — while also reducing housing prices and competition for university slots.

The deep public opposition to labor migration is built on the widespread recognition that migration moves money away from most Americans’ pocketbooks and families. It moves money from employees to employers, from families to investors, from young to old, from children to their parents, from homebuyers to real estate investors, from Red states to Blue states, and from the central states to the coastal states such as New York.

This article has been updated to make it clear that the polls were funded by Heritage Action, not by the Heritage Foundation.