President Joe Biden’s border officials allowed the entry of 43 percent more migrants from “other” countries during April, even as the number of recorded arrivals rose modestly to 178,000, according to government data.

Almost 34,000 people arrived from countries other than Mexico, Honduras, Guatemala, or El Salvador, arrived in April, according to data released by Alejandro Mayorkas’ Department of Homeland Security.

Eighty-one percent of the 33,877 April migrants from “other” countries  — or 27,721 migrants — were released into the United States to seek jobs and apartments, according to the data.

The “other” countries include Venezuela and Ecuador, along with India, Brazil, and many other countries.

Once released, the migrants can tell their back-home friends and relatives that they had made it through Biden’s open border.

“That’s the whole game,” said Rob Law, the director of regulatory affairs and policy for the Center for Immigration Studies. “Once illegal aliens successfully get into this country and word gets back to the home country how they succeeded, everybody else wants to follow,” he told Breitbart News on Wednesday.

Just 6,000 “other” migrants were denied entry under the Title 42 emergency rule, up from 5,500 denied in March. So the data shows “other” country rejections rose by 9 percent — while “other” country admissions spiked by 43 percent. 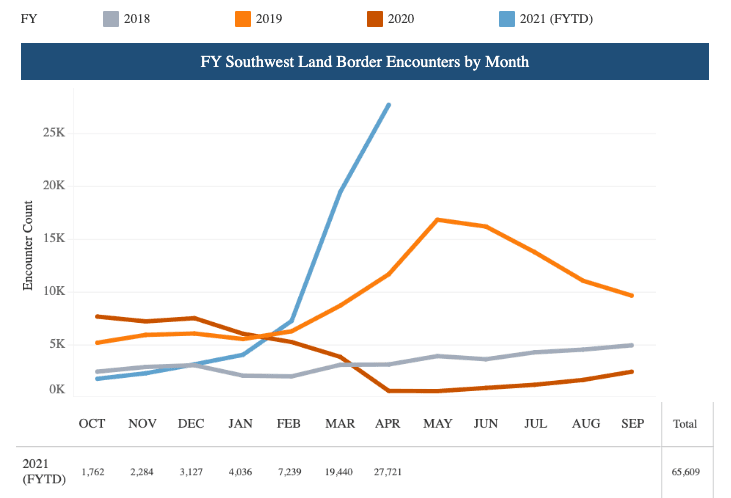 On May 9, AzCentral.com reported the welcome for two Ecuadorian migrants and their two children:

“In just a short time, we were already lost in the desert, we thought we were going to die,” said Asas, 30, whose dream is to see her sister in New Jersey.

They had no choice. They grabbed their cell phones and dialed 911 seeking help from U.S. law enforcement.

Fortunately for them, help arrived quickly. Border Patrol agents found them within minutes and took them to a U.S. Immigration and Customs Enforcement facility where they were detained for a few hours before being referred to the Welcome Center in Phoenix, and then referred to support groups.

A law enforcement source, speaking on the condition of anonymity, reported the illegal entry of more than 200 Venezuelan nationals south of town early Wednesday morning. The large group, consisting mostly of family units, was quickly apprehended by the Border Patrol and is in transit to nearby stations for processing.

Since Friday, at least 600 Venezuelan nationals have entered through the small West Texas town. Most will be summarily released into the community to travel to their intended final destinations in the United States.

Those “apprehension” numbers do not include the “got-aways” who sneaked across the border. The number of got-aways in April was roughly 45,000, boosting the total got-away number to 200,000 since October, an agency sourced told Breitbart News.

Officials sent 111,000 people back to Mexico, most who were single adults caught while crossing the border. Few of the migrants were penalized or flown home, so helping them try again to sneak through the border.

For many years, a wide variety of pollsters have shown deep and broad opposition to labor migration and the inflow of temporary contract workers into jobs sought by young U.S. graduates. This opposition is multiracial,  cross-sex, non-racist, class-based, bipartisan, rational, persistent, and recognizes the solidarity Americans owe to each other.

The deep public opposition to labor migration is built on the widespread recognition that legal and illegal migration moves money away from most Americans’ pocketbooks and families. Migration moves money from employees to employers, from families to investors, from young to old, from children to their parents, from homebuyers to investors, from technology to stoop labor, from red states to blue states, and from the central states to the coastal states such as New York.

DHS Mayorkas thinks immigrants are the "backbone" of the U.S. economy.
Similar claims are made by Pelosi, Bush, Schumer, etc.,
But flattery for migrants can mask contempt for Americans. That could be very harmful if shared by the nation's border chief. https://t.co/I1ZnlGpdL7