The national average price for a gallon of regular gas has now registered at a record-high $4.37, while diesel fuel averaged at $5.55 – also an all-time high, the American Automobile Association (AAA) reported. California had the highest average of any state for regular, which rang in at $5.84, while Georgia averaged the lowest regular prices at $3.90.

A halt in price increases coincided with a “record-setting release of oil from emergency reserves,” CNN noted, but what relief the move may have created for consumers was short-lived, as prices are climbing to new highs just months later.

In a statement, Daniel Turner, the founder and executive director of Power the Future – a nonprofit that advocates for American energy workers – ripped President Joe Biden for the rocketing costs at the pump:

There is no doubt the White House is hoping that Americans simply become numb to yet another disastrous result of their energy failures, but the pain at the pump is too real and everyone intrinsically understands that Joe Biden is to blame. President Biden is now a two-time record holder for the highest gas prices, the most oil drained from the strategic reserve and re-injecting the term ‘inflation’ back into the national lexicon for the first time since the 1970s. This type of failure doesn’t happen by accident. The President’s green ideology is a man-made disaster and we’re all paying the price.

The record-setting day follows a report that Democrat-led Delaware, Pennsylvania, and New Jersey experienced all-time highs this week, as Breitbart News noted. While Democrats are quick to point the finger at Russia, coronavirus restrictions, and oil companies for increased prices at the pump, multiple surveys have shown Americans lay responsibility for both higher gas prices and inflation at the feet of Democrats and Biden, Breitbart News reported last month.

“Under Biden’s leadership thus far, gas prices have reached record-high levels, inflation hit a 40-year high, and the U.S. Gross Domestic Product (GDP) shrunk 1.4 percent in the first quarter of 2022,” according to the report. 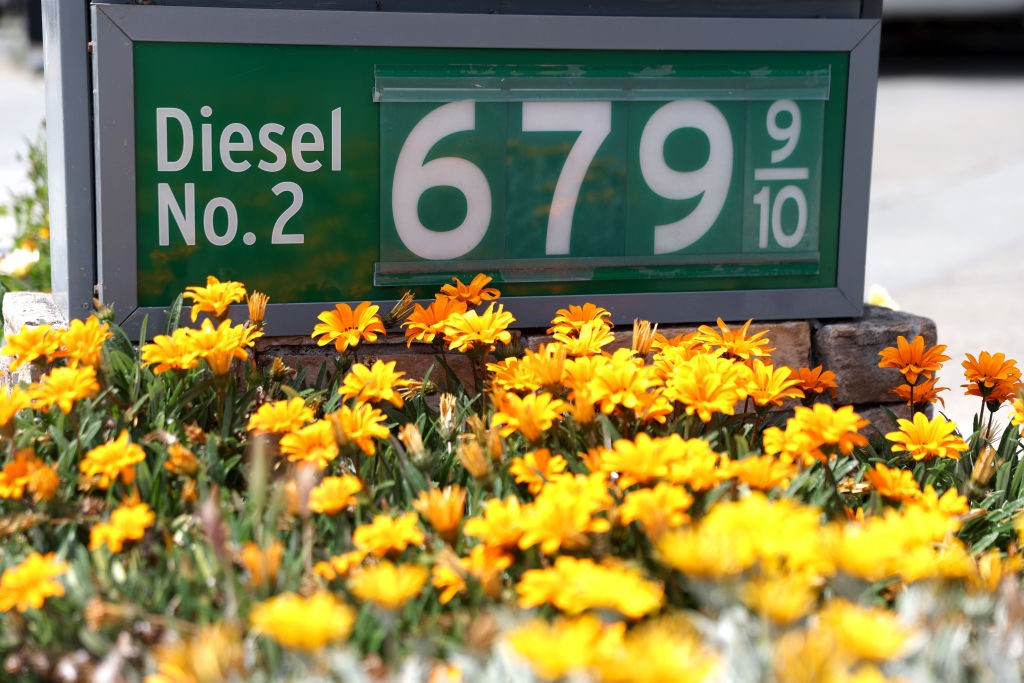 Diesel prices over $6.50 a gallon are displayed at a Chevron gas station on May 02, 2022 in San Rafael, California. The price of diesel has reached an all-time high in the U.S. and is causing trouble in the trucking industry. The average price of diesel is at $5.296 per gallon. (Justin Sullivan/Getty)

A States Action/Trafalgar poll released last week showed the reeling economy is the most pressing issue for voters in the upcoming midterm elections. Of respondents, 38.5 percent said that “lowering inflation and fixing the economy” was the most important issue.

The survey sampled 1,080 likely genre elections voters between April 24-27 and had a margin of error of plus or minus 2.99 percent.