Percy Deift of New York University, Svetlana Jitomirskaya of Georgia Institute of Technology and University of California Irvine, and Sergiu Klainerman of Princeton University – all academic math scholars who arrived in the United States as young immigrants – wrote at Quillette in August of their concern that the nation they are “proud” to call their home is quickly losing its “dominant position” in the mathematical sciences.

Keeping in mind China’s “status as an authoritarian country,” the mathematicians warned Americans:

The drawbacks of American education policies are so pronounced that US schools are now losing their ability to attract elite scholars despite the fact that the United States offers these academics a freer and more democratic environment.

The authors cited several reasons for what they view as the devastating decline of America in mathematical scholarship.

First, the state of math in K-12 public schools has resulted in few American children who are prepared for STEM careers, they explained.

“This leaves us increasingly dependent on a constant inflow of foreign talent, especially from mainland China, Taiwan, South Korea, and India,” the math scholars wrote, noting a 2015 survey, conducted by the Council of Graduate Schools and the Graduate Record Examinations Board, that found about 55 percent of all participating graduate students in mathematics, computer sciences, and engineering at American schools were found to be non-U.S citizens. 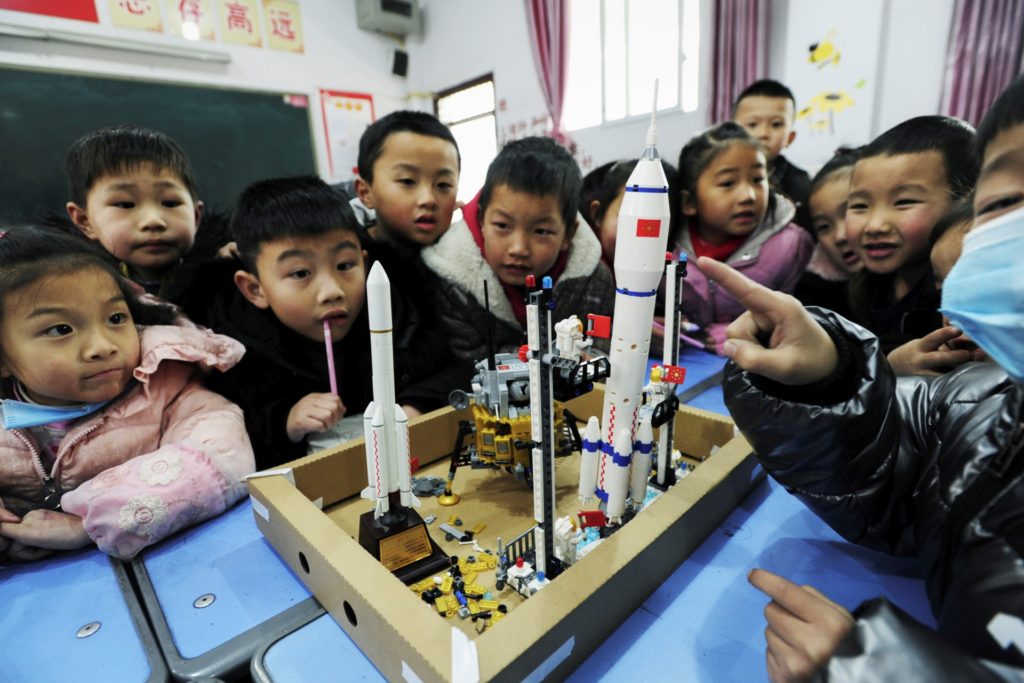 Children look at models of Longmarch rockets and a lunar probe during an aerospace education lesson at a primary school in Yunyang county in southwestern China’s Chongqing on December 16, 2020. (STR/AFP via Getty Images)

“In our field, mathematics, we find that at most top departments in the United States, at least two-thirds of the faculty are foreign born,” they wrote. “Similar patterns may be observed in other STEM disciplines.”

Second, the national focus on social justice and diversity in K-12 schools, “however well-intentioned, has had the unfortunate effect of weakening the connection between merit and scholastic admission,” the authors asserted, noting such a priority “has served (sometimes indirectly) to discriminate against certain groups—mainly Asian Americans.”

The math scholars explained the irony associated with states, such as California, that are touting efforts to fight against what is claimed to be “racist” math:

The social-justice rhetoric used to justify these diversity, equity, and inclusion (DEI) programs is often completely at odds with the reality one observes on campuses. The concept of fighting “white supremacy,” in particular, doesn’t apply to the math field, since American-born scholars of all races now collectively represent a small (and diminishing) minority of the country’s academic STEM specialists.

With specific reference to the California revised Mathematics Framework – that seeks to, above all, do away with “racism” in math – the authors wrote that, if adopted, the plan would, in fact, “do away with any tracking or differentiation of students up to the 11th grade”:

In order to achieve what the authors call “equity” in math education, the framework would effectively close the main pathway to calculus in high school to all students except those who take extra math outside school—which, in practice, means students from families that can afford enrichment programs (or those going to charter and private schools).

The California framework’s intention to focus on what is termed “data science” while it minimizes algebra will leave students “completely unprepared for most STEM undergraduate degrees,” the math scholars warned, troubled by what they view as a destructive pattern even at the national level.

“[A]t many of our leading academic and research institutions, including the National Academies of Sciences, the American Academy of Arts and Sciences, the National Science Foundation, and the National Institutes of Health, scientific excellence is being supplanted by diversity as the determining factor for eligibility in regard to prizes and other distinctions,” they wrote.

The mathematicians took note as well of how the “education establishment” in the U.S. maintains “an almost complete lock on the content taught in our schools, with little input from the university math community.”

Observing the “constant stream of ill-advised and dumbed-down ‘reforms’” that have pervaded American public schools, the math scholars described them as having “served to degrade the teaching of mathematics to such an extent that it has become difficult to distinguish a student who is capable from one who is not.”

Common Core has been a disaster. https://t.co/nmWkNSOuhF

Additionally, the training for math teachers is problematic, the writers observed:

The vast majority of K-12 math teachers in the United States are graduates of programs that teach little in the way of substantive mathematics beyond so-called math methods courses (which focus on such topics as “understanding the complexities of diverse, multiple-ability classrooms”). This has been true for some time. But the trend has become more noticeable in recent years, as curricula increasingly shift from actual mathematics knowledge to courses about social justice and identity politics.

The writers also referred to the math teacher certification process as a “costly and time-consuming prerequisite” justified as necessary for effective performance.

“But to our knowledge, this claim isn’t supported by the experience of other advanced countries,” they observed. “Moreover, in those US schools where certification isn’t required, such as in many charter and private schools, math majors and PhDs are in great demand, and the quality of math instruction they provide is often superior.”

The mathematicians also cited America’s abandonment of its drive to “recruit top talent” as a move that has led other nations, especially China, to use the same strategies from which the United States once benefited in the past.

“China, America’s main economic and strategic competitor, is in the midst of an extraordinary, mostly successful, effort to improve its universities and research institutions,” the authors reported. “As a result, it is now able to retain some of the best Chinese scientists and engineers, as well as attract elite recruits from the United States, Europe, and beyond.”

Former Massachusetts Gov. Deval Patrick promoted Common Core in 2010, leading to his state's fall as a model in education for the nation. https://t.co/v2M4txUWKV

Young students in China are surpassing their American counterparts in math already.

In 2018 international testing of 15-year-olds in mathematics, China ranked first in proficiency while the United States ranked 25th.

Similarly, results of the 2019 National Assessment of Educational Progress (NAEP), also known as the Nation’s Report Card, showed U.S. school children have made “no progress” in reading or mathematics over the past ten years.

“Over the past decade, there has been no progress in either mathematics or reading performance, and the lowest-performing students are doing worse,” Dr. Peggy Carr, current commissioner of the National Center for Education Statistics (NCES), said at the time. “In fact, over the long term in reading, the lowest-performing students—those readers who struggle the most—have made no progress from the first NAEP administration almost 30 years ago.”

Dr. Peggy Carr, Associate Commissioner, notes that the lowest performing students–those readers who struggle the most–have made no progress in reading since the first assessment almost 30 years ago. Learn more: https://t.co/EWajchXvIH#NAEPDay pic.twitter.com/9zanK5fPmv

China, the mathematicians noted, “pursues none of the equity programs that are sweeping the United States”:

Quite the contrary: It is building on the kind of accelerated, explicitly merit-based programs, centered on gifted students, that are being repudiated by American educators. Having learned its lesson from the Cultural Revolution, when science and merit-based education were all but obliterated in favor of ideological indoctrination, China is pursuing a far-sighted, long-term strategy to create a world-leading corps of elite STEM experts.

“In some strategically important fields, such as quantum computing, the country is arguably already ahead of the United States,” the mathematicians asserted.