I’ve never been to a protest. I hate protesters because they seem to be professional bitchers. They’re quick to complain and jump to picket signs and screaming at the drop of a hat. I once had lunch on a sidewalk cafe as a bunch of war protesters sat two tables away from us. I wouldn’t want my kids near that protest because the teens were screaming so loud and some were covered in fake blood, carrying signs with Bush super imposed with Hitler. Their chants included saying “fuck” a lot. Apparently, daddy’s private school money didn’t pay for an etiquette workshop. 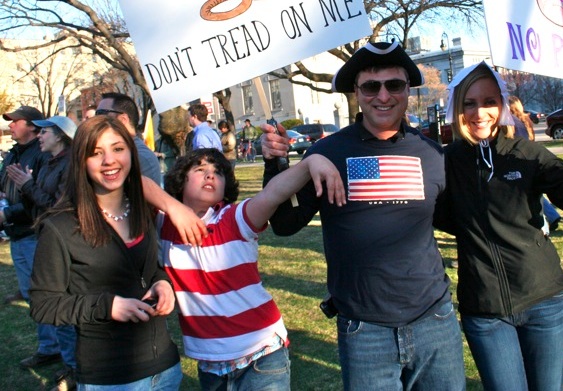 But on Tea Party Day, no freaks show up. Because the issue isn’t about complaining that an untraditional group can’t get married. It’s not about opposing a war that some people approve and others don’t. It’s about being over-taxed to fund bail outs and expand government to exert control over the citizens. Who, besides this administration isn’t for that?

My family is safe among the over-taxed people. Hopefully, there will be a higher percentage of conceal and carriers…all the more American. No broken windows, nobody takes their clothes off. Nobody makes out in front of my kids. There are lots of nice old ladies wearing red white and blue. I love seeing the American flag in the hands of people who know how to use it. They wave it with gusto because it’s not the first time they’ve ever touched a flag. They didn’t have to buy one for Tea Party Day.

I want my kids to see this. It’s important for them to see that middle America gets mad too. Protests aren’t just for lefty victims and college kids. The politicians may not be listening and frankly, it would surprise me if this administration listened to my protest as much as they gave an ear to Europe. They’re more eager to listen to France than to American Republicans. After all, they know their constituents.

Now all that’s left is to watch media declare the tea party a quagmire, a sexual innuendo, an act of hypocrisy. The usual.