The FOX-TV comedy-drama series The Good Guys continues in reruns tonight at 9 EDT. It’s well worth it to catch an episode or two–and you might find yourself tuning in regularly or even downloading a few episodes (at a very attractive price).

Set in modern-day Dallas, The Good Guys was created by Matt Nix, the brains behind the USA Network hit Burn Notice. As Nix and his team proved in that show, he is a master of satisfyingly complex plotting. Those who enjoy a whacking good story in which characters are confronted with tough moral choices will enjoy Burn Notice immensely. 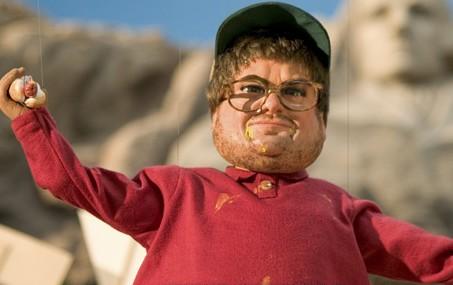 But whereas Burn Notice includes elements of comedy but is basically a crime/espionage/adventure drama, The Good Guys is more directly comic in intent. The premise is simple: two Dallas police detectives who have fallen out with their bosses are exiled to handle lame, unchallenging property-crimes cases. The brilliant twist that Nix and his team put on this premise is that each case leads to a much bigger crime, often involving murder, which ultimately results in the two detectives bringing very big criminals to justice.

Thus the show amusingly illustrates the “Broken Windows” crime-fighting theory of James Q. Wilson and George L. Kelling–literally, in the case of episode 2, “Bait and Switch.” In fact, the third episode, “Broken Door Theory,” proves that the show’s creators know the theory and recognize it as an inspiration for the show’s concept: the two detectives discuss the notion and what it means: “The idea is you got to stop the small crimes before they become the big ones,” Stark explains, correctly.

The producers are right in observing that criminals usually start with small crimes and work their way up to bigger ones and that big crimes tend to be made up of smaller ones–as when a murder involves a case of breaking and entering. Solving the burglary can lead to the discovery of the murder. Of course, most small crimes are not parts of bigger ones, so the producers have the good sense to show us only those that do–and to make sure that they’re assigned to our protagonists.

Those cases turn out to be very interesting and amusing, with pleasingly twisty and surprising plot-lines. Jack Bailey (Colin Hanks) is a young, ambitious detective who is very frustrated about being stuck investigating low-level burglary cases, such as the theft of a humidifier from a thrift store. He’s trapped at the bottom of the heap because of his excessive candor: he has a habit of pointing out the mistakes of his superiors in the department.

His partner, Dan Stark (Whitford), is a classic character (literally). He was once a famous hero–he saved the life of the governor’s son twenty-five years ago–but has decayed into a heavy-drinking, irresponsible time-server. Stark, however, still has the courage, intelligence, and intuition that once made him an extraordinarily good cop. (His name means ‘strong’ in German.) Though rather short, dumpy, and not handsome, Stark is a hard-nosed, rule-breaking throwback to the iconoclastic hero cops of the 1970s and ’80s, such as “Dirty Harry” Callahan, John “Die Hard” McClain, and Mel Gibson’s Lethal Weapon character, Martin Riggs.

Bailey’s and Stark’s strengths are used to establish an important point that is made clear in the untitled pilot episode: that the department is underutilizing these two men because the government’s inflexible, bureaucratic rules prevent the department from using their talents. As a minor burglary comically develops into a complex and case involving dangerous villains fighting over a million dollars in ill-gotten money, it all leads to murder, kidnapping, and assorted mayhem. Stark and Bailey doggedly pursue the investigation, find the villains, and save the innocents.

And after all that? They’re dressed down by the assistant DA for breaking procedural rules and told by their boss that they’re lucky they aren’t being fired. Later, however, Assistant District Attorney Liz Traynor (Jenny Wade), an attractive young lady whom Bailey used to date, praises him and his partner for their efforts in the case: “Completely, totally, and unofficially off the record: that was some good work.”

In addition, Bailey and Stark receive a letter of praise from one of the parties in the case, the erstwhile second-best assassin in the world (now the best, having killed his predecessor), lauding their bravery and honor.

In the aforementioned “Bait and Switch,” a broken window leads to the discovery of an international car-theft ring. The main criminals are a pompous Englishman and a corrupt Dallas policewoman. A petty criminal ends up helping Stark and Bailey, and the various criminals consistently double-cross one another. That’s a common element throughout the series’ first season.

The “Broken Door Theory” episode includes an amusing thematic element as a flu bug passing from person to person parallels the way way one crime leads to another in the main story.

These long strings of causality have a point beyond the humor and enjoyable suspense. At any point the miscreants could choose to stop at the damage they’ve done so far, but instead they press ahead to additional, worse offenses. That serves to emphasize the voluntary nature of their actions, thus making the viewer continually aware of the criminals’ moral culpability. The offenders are not driven to crime like the fictional Jean Valjean in Les Miserables; they choose it freely, like real-life criminals.

There are also many small moments of politically incorrect charm. In episode 7, “Hunches and Heists,” a character who is a vegan and yoga practitioner on a “path to spiritual enlightenment” expressed in New Age gobbledygook is a vicious gangster. That’s the kind of upending of conventions the show does continually, and for which it deserves special praise.

Likewise, the central characters are more than just a conventional Hollywood male-buddy team. Bailey always wants to do things by the book, following established police procedure, whereas Stark is intuitive, inventive, and smart, and entirely devoted to getting results, regardless of the rules. That, of course, leads to continual tension between the two, yet it also expresses the value of individual initiative the need for “a little rebellion now and then,” in Thomas Jefferson’s immortal words. Thus the show explores what we as individuals give up in the desire to live in an orderly society, and what we should never give up: individual honor and initiative.

As with Stark and Bailey themselves, there’s a good deal more to The Good Guys than may initially be apparent, and it, too, is “some good work.” And that’s for the record.