Rosie O’Donnell took to her website Saturday to defend herself after posting a tweet last week questioning whether Donald Trump’s son, Barron Trump, is autistic.

On Monday, the 54-year-old comedian and outspoken critic of Trump posted a link to a video on her Twitter account that questions whether Trump’s 10-year-old son with wife Melania Trump has ASD, or Autism Spectrum Disorder. 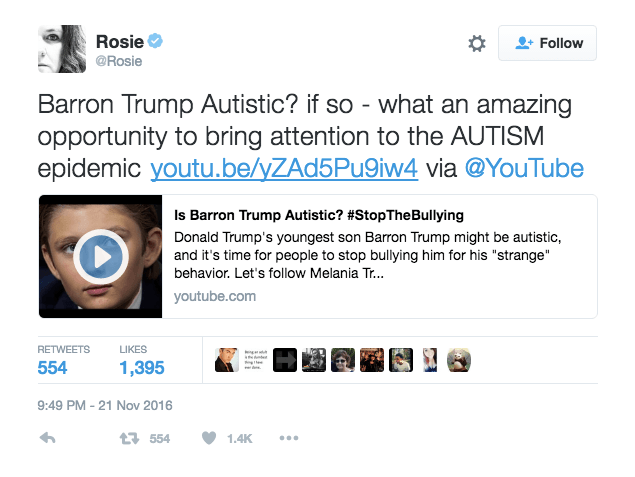 “Barron Trump Autistic?” O’Donnell wrote. “If so – what an amazing opportunity to bring attention to the AUTISM epidemic.”

O’Donnell’s tweet quickly sparked a massive backlash online, with social media users lambasting the comedian for speculating about the health of a child.

as a parent of a child with autism- I am extrmly insultd. This wasn't meant 2 help raise awareness. Just plain cruel

You have no interest in Barron. You want to stir up trouble. Play fair. Don't attack kids, Rosie! This is low, even for you!

@grc_seaofred @Rosie @YouTube So low!! Amazing that her hatred overflows to his child. You disgust me Rosie.

In a message posted to her website on Saturday, O’Donnell said she was moved to post the video because she found it “educational and informational,” and that her own 3-year-old daughter Dakota had been diagnosed with high-functioning autism in September.

“IF it is true – i tweeted from my heart it would help so much with the autism epidemic [sic],” O’Donnell wrote.

The comedian said she holds no “ill will” for Trump’s children, or for any children, but then proceeded to slam Trump himself.

“donald does not have the power to change the facts to re write history so speak true – stand tall [sic],” she wrote. “peace out as we try to save democracy from this madman who thinks OUR country is his [sic].”

O’Donnell has feuded publicly with Trump for much of the last decade, but the war of words reached new heights during the presidential campaign. The comedian previously called Trump an “orange piece of sh*t,” and in May, predicted that the Republican businessman would “never become president.”

In the weeks since Trump’s victory over Hillary Clinton, O’Donnell has kept up a steady barrage of anti-Trump messages on her Twitter account. On Friday, the comedian tweeted that someone must “stop him before he gets sworn in.”

WHO DOES THIS – IS IT BEING WORKED ON – WHO IS IN CHARGE OF THE GET HIM OUT MOVEMENT – ASAP – WHO ? WHO DO WE CALL? @punkdinok @RawStory

STOP HIM BEFORE HE GETS SWORN IN – EMERGENCY !!!! NOW!!! @StevenMilazzo