During a radio interview on Sunday, comic legend Jackie Mason called Madonna a “deranged yenta” for comments she made while leading a women’s march against President Donald Trump earlier this month.

“I don’t know why anybody even quotes Madonna about anything that she says at all,” Mason stated. He then referred to Madonna in what Page Six characterized as perhaps “the worst borscht-belt insult” – a “deranged yenta.”

Mason was speaking during his regular segment on this reporter’s weekend talk radio program, “Aaron Klein Investigative Radio,” broadcast on New York’s AM 970 The Answer and NewsTalk 990 AM in Philadelphia.

Yenta is a Yiddish word for a woman who is a gossip or busybody. 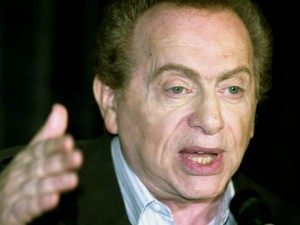 Here is a yenta who is out of control all her life and has lived a filthy, vulgar life all her life. And said all kinds of disgusting things. I remember when she once said that she is offering oral sex to anybody who would vote for Hillary Clinton. And did you notice she didn’t even get any offers?

Nobody cares about anything she says because, let’s be honest about it. When she was sings, she sings for a hundred million people. When she talks, everybody disappears. Because everybody gets nauseous. She can’t talk and still make sense at the same time. …

And this deranged yenta, she’s like a walking whorehouse. First, she starts offering herself as a singer. But if you have no time to listen to her song she’s ready to take her clothes off. ‘Do whatever you want to me.’ She’s ready to make a deal with anybody for any price. So, all of the sudden she became an authority about what the President should do? And her political opinion became important? She doesn’t know what she is talking about.

Time reported on Madonna’s speech at the women’s march:

“To our detractors that insist that this march will never add up to anything, f— you,” Madonna said.

The singer said the expletive three times during her speech at the march, saying it took “this horrific moment of darkness to wake the f–k up.” The “Vogue” singer said marginalized communities would be under threat during the Trump administration, which is why hundreds of thousands of women took to the streets in protest.

“Yes I am outraged,” she said. “Yes I have thought an awful lot about blowing up the White House, but I know that this won’t change anything. We cannot fall into despair.”

Madonna later clarified her remark about “blowing up the White House.”

“I am not a violent person, I do not promote violence and it’s important people hear and understand my speech in it’s entirety rather than one phrase taken wildly out of context,” she said.

“My speech began with ‘I want to start a revolution of love.’ I then go on to take this opportunity to encourage women and all marginalized people to not fall into despair but rather to come together and use it as a starting point for unity and to create positive change in the world,” ABC News quoted her as saying.

“I spoke in metaphor and I shared two ways of looking at things — one was to be hopeful, and one was to feel anger and outrage, which I have personally felt,” Madonna stated. “However, I know that acting out of anger doesn’t solve anything. And the only way to change things for the better is to do it with love.”