NEW YORK (AP) — R. Kelly, the R&B superstar known for his anthem “I Believe I Can Fly,” was convicted Monday in a sex trafficking trial after decades of avoiding criminal responsibility for numerous allegations of misconduct with young women and children.

A jury of seven men and five women found Kelly guilty of racketeering on their second day of deliberations.

The charges were based on an argument that the entourage of managers and aides who helped the singer meet girls — and keep them obedient and quiet — amounted to a criminal enterprise.

Several accusers testified in lurid detail during the trial, alleging that Kelly subjected them to perverse and sadistic whims when they were underage. 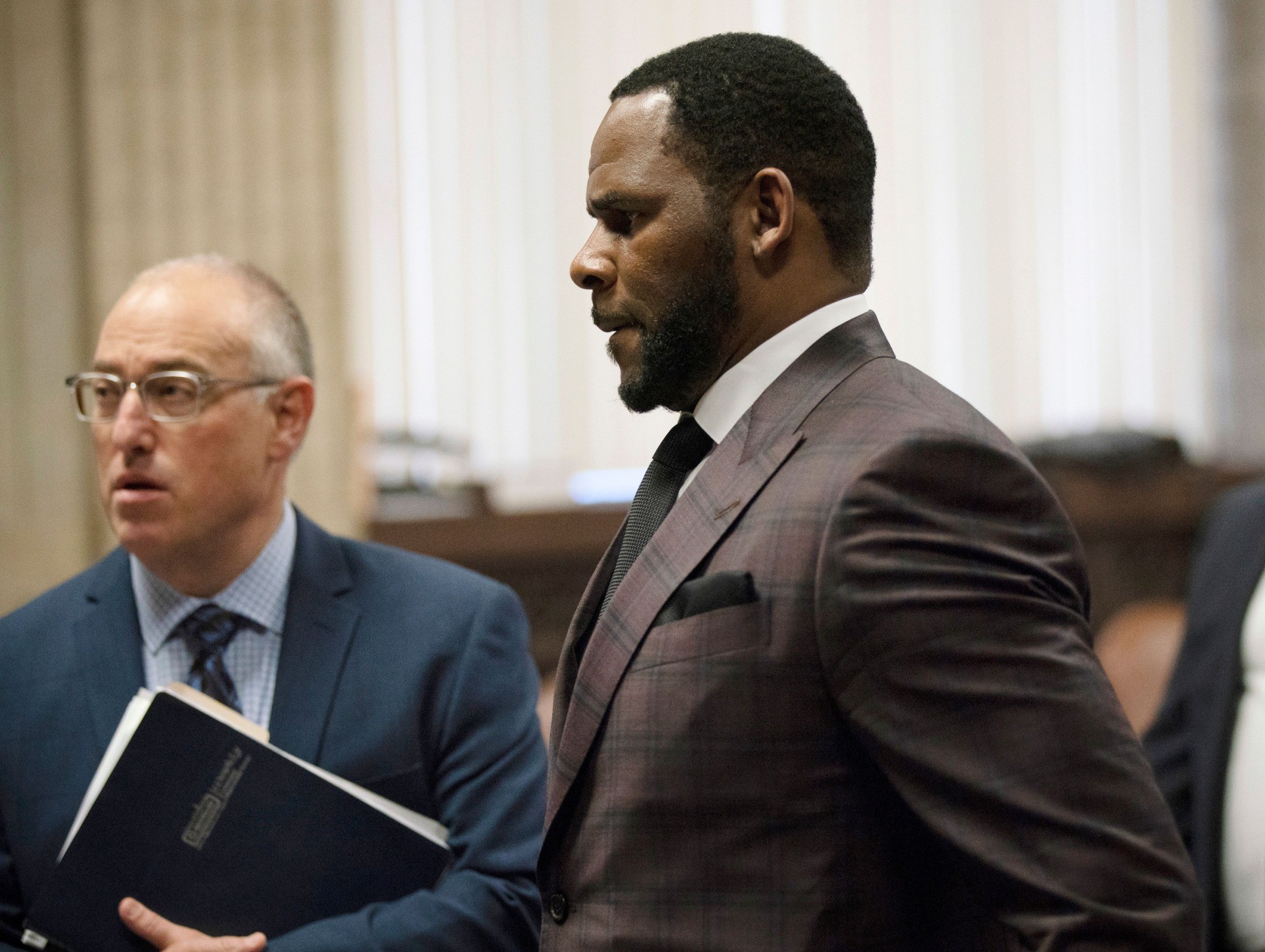 For years, the public and news media seemed to be more amused than horrified by allegations of inappropriate relationships with minors, starting with Kelly’s illegal marriage to the R&B phenom Aaliyah in 1994 when she was just 15.

His records and concert tickets kept selling. Other artists continued to record his songs, even after he was arrested in 2002 and accused of making a recording of himself sexually abusing and urinating on a 14-year-old girl.

Widespread public condemnation didn’t come until a widely watched docuseries “Surviving R. Kelly” helped make his case a signifier of the #MeToo era, and gave voice to alleged victims who wondered if their stories were previously ignored because they were Black women.

At the trial, several of Kelly’s accusers testified without using their real names to protect their privacy and prevent possible harassment by the singer’s fans. Jurors were shown homemade videos of Kelly engaging in sex acts that prosecutors said were not consensual.

Assistant U.S. Attorney Maria Cruz Melendez argued that Kelly was a serial abuser who “maintained control over these victims using every trick in the predator handbook.”

The defense labeled the accusers “groupies” and “stalkers.”

Defense attorney Deveraux Cannick questioned why the alleged victims stayed in relationships with Kelly if they thought they were being exploited.

“You made a choice,” Cannick told one woman who testified, adding, “You participated of your own will.”

Kelly, born Robert Sylvester Kelly, has been jailed without bail since in 2019. The trial was delayed by the coronavirus pandemic and Kelly’s last-minute shakeup of his legal team.

When it finally started on Aug. 18, prosecutors painted the 54-year-old singer as a pampered man-child and control freak. His accusers said they were under orders to call him “Daddy,” expected to jump and kiss him anytime he walked into a room, and to cheer only for him when he played pickup basketball games in which they said he was a ball hog.

The accusers alleged that they also were ordered to sign nondisclosure forms and were subjected to threats and punishments such as violent spankings if they broke what one referred to as “Rob’s rules.” Some said they believed the videotapes he shot of them having sex would be used against them if they exposed what was happening.

Among the other more troubling tableaus: Kelly keeping a gun by his side while he berated one of his accusers as a prelude to forcing her to give him oral sex in a Los Angeles music studio; Kelly giving several alleged victims herpes without disclosing he had an STD; Kelly coercing a teen boy to join him for sex with a naked girl who emerged from underneath a boxing ring in his garage; and Kelly shooting a shaming video of one alleged victim showing her smearing feces on her face as punishment for breaking his rules.

Some of the most harrowing testimony came from a woman who said Kelly took advantage of her in 2003 when she was an unsuspecting radio station intern. She testified he whisked her to his Chicago recording studio, where she was kept locked up and was drugged before he sexually assaulted her while she was passed out.

When she realized she was trapped, “I was scared. I was ashamed. I was embarrassed,” she said.

She said one of R. Kelly’s employees warned her to keep her mouth shut about what had happened.

Other testimony focused on Kelly’s relationship with Aaliyah. One of the final witnesses described seeing him sexually abusing her around 1993, when Aaliyah was only 13 or 14.

Jurors also heard testimony about a fraudulent marriage scheme hatched to protect Kelly after he feared he had impregnated Aaliyah. Witnesses said they were married in matching jogging suits using a license falsely listing her age as 18; he was 27 at the time.

Aaliyah, whose full name was Aaliyah Dana Haughton, worked with Kelly, who wrote and produced her 1994 debut album, “Age Ain’t Nothing But A Number.” She died in a plane crash in 2001 at age 22. 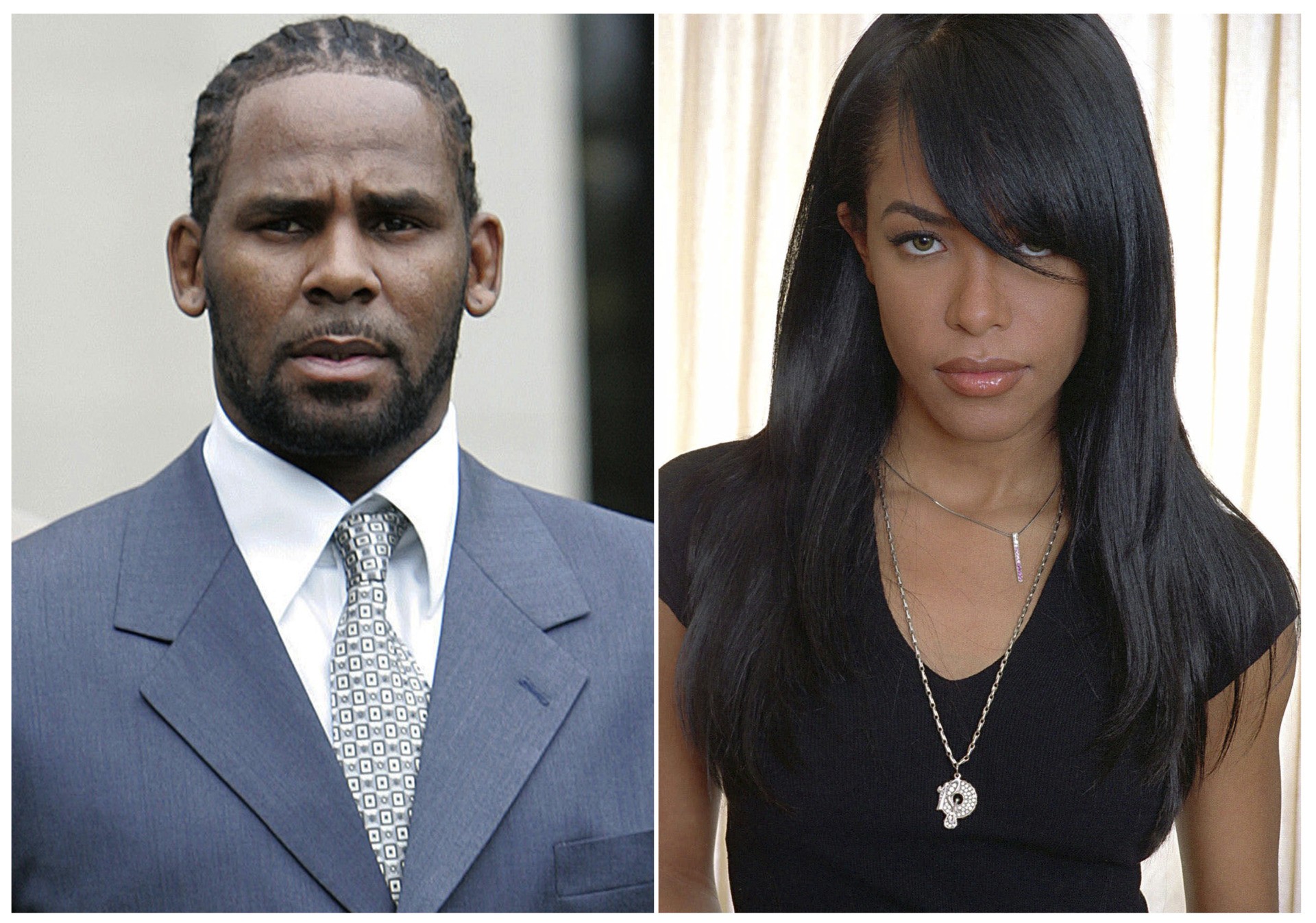 This combination photo shows singer R. Kelly after the first day of jury selection in his child pornography trial at the Cook County Criminal Courthouse in Chicago on May 9, 2008. (AP Photo/File) 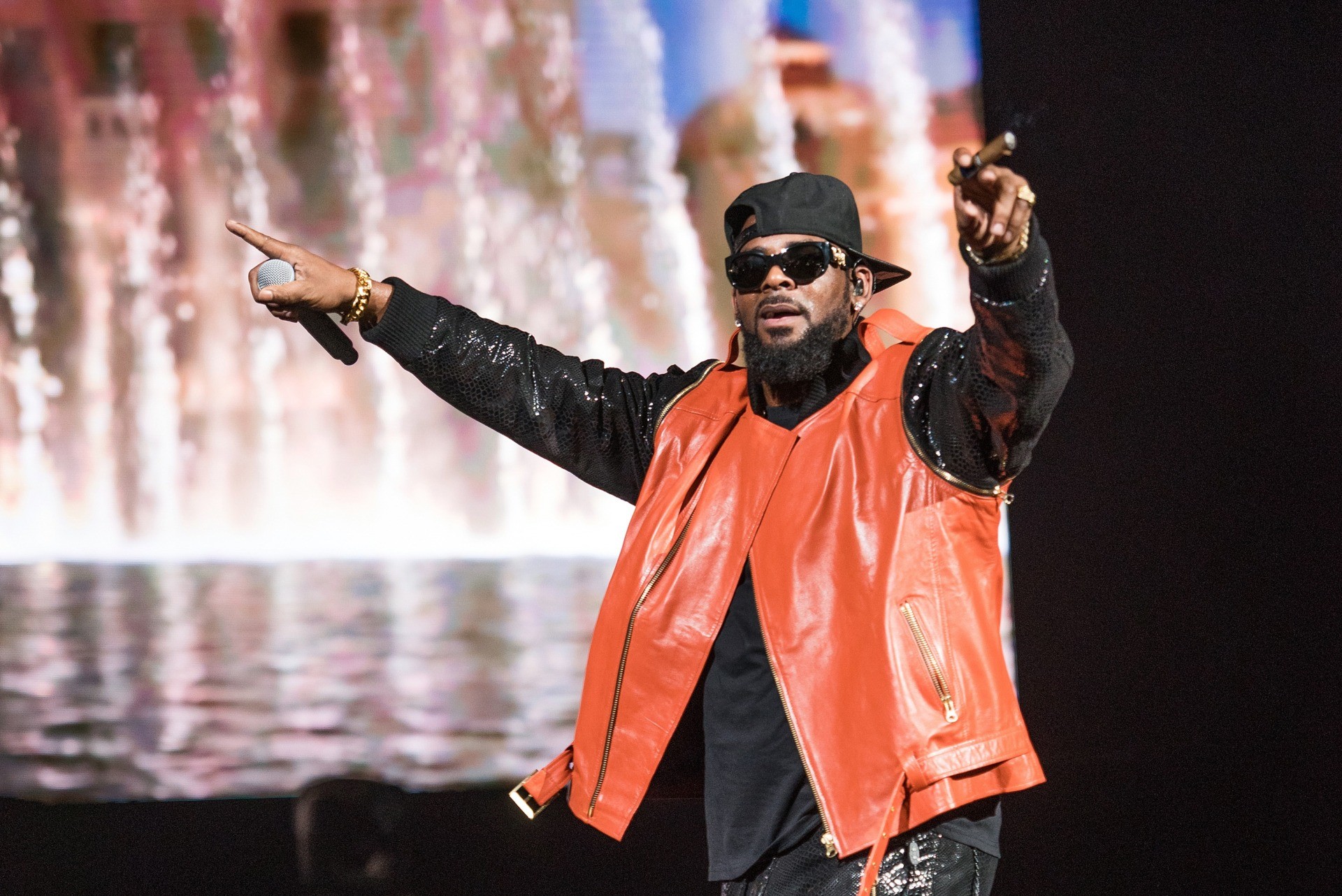 R. Kelly performs in concert at Barclays Center on September 25, 2015 in the Brooklyn borough of New York City. (Photo by Mike Pont/Getty Images)

In at least one instance, Kelly was accused of abusing a victim around the time he was under investigation in a child pornography case in Chicago. He was acquitted at trial in 2008.

For the Brooklyn trial, U.S. District Judge Ann Donnelly barred people not directly involved in the case from the courtroom in what she called a coronavirus precaution. Reporters and other spectators had to watch on a video feed from another room in the same building.

The New York case is only part of the legal peril facing the singer. He also has pleaded not guilty to sex-related charges in Illinois and Minnesota. Trial dates in those cases have yet to be set.