Country star Jason Aldean defended his wife Brittany Aldean Friday from critics who took issue after she shared photos of herself and their young children wearing anti-Joe Biden clothing.

Brittany Aldean shared the series of photos with her two million Instagram followers last weekend, one of which showed her posing alongside her husband while clad in a shirt boasting “Anti Biden Social Club.”

As Breitbart News reported, the wife of the “Dirt Road Anthem” singer’s photos included one of their children wearing anti-Biden shirts.

In another photo, Brittany is wearing a shirt reading, “Anti-Biden Social Club.”

The country singer approved of the photo, commenting, “My boy!”

The clothes are sold at a website called DaddyT45, an obvious reference to former President Donald Trump.

Jason Aldean chose not to join the political clothing show but when someone took to the comments of Brittany’s post to criticize her for using her children as “political props,” Jason returned fire on her behalf.

“Watch ur mouth lady! We will teach our kids what we think is right and what we think is best for their future,” he said, according to the Washington Post. “If you think what is happening right now is ‘great’ for the future of our kids and grandkids, u are delusional!”

He added: “Definitely better than what we got now! Please tell me one thing that the current administration has done that is positive? Just 1!!!” 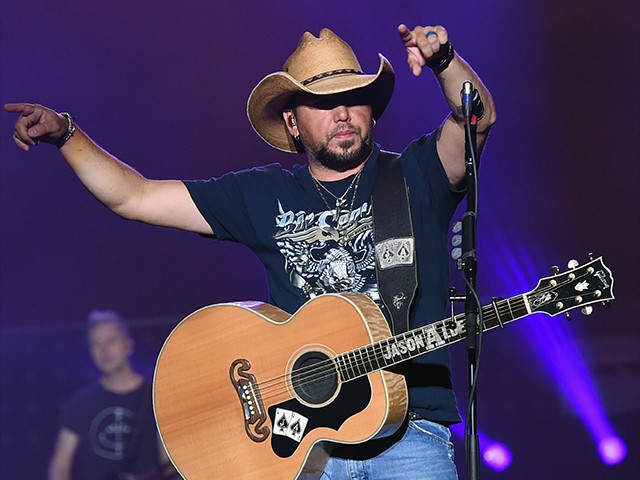 This is not the first time Brittany Aldean has waded into political debate.

During a Q&A on her Instagram last month, Brittany expanded on her conservative views, telling her 1.9 million followers many would be “surprised how many people do agree but aren’t able to speak about their views.”

“I personally don’t give a damn if people don’t agree with me,” she said. “I think it’s important now more than ever to stand for what you believe, even if it ‘goes against the grain.’”

“Do your research, and form your own opinion — speak out if you wish,” she added. “But most importantly, don’t bully people who feel differently than you.”