Actor Matthew McConaughey on Wednesday clarified his position on vaccinating children against the Chinese coronavirus after initially expressing hesitancy, revealing that his 13-year-old son is fully vaccinated.

The Dallas Buyers Club star made waves this week after speaking to Andrew Ross Sorkin at the New York Times DealBook summit, stating that he “couldn’t mandate having to vaccinate the younger kids.”

“I still want to find out more information,” McConaughey said at the time. He continued:

McConaughey added that he personally opted for frequent testing for his children.

His position triggered a bit of backlash, prompting a response from U.S. Surgeon General Dr. Vivek Murthy, who appeared on CNN and urged parents to vaccinate their children.

“Many kids have died. Sadly, hundreds of children — thousands — have been hospitalized, and as a dad of a child who has been hospitalized several years ago for another illness, I would never wish upon any parent they have a child that ends up in the hospital,” Murthy said.

“And the vaccines have shown in these trials for children five through eleven they are more at 90 percent effective in protecting our kids from symptomatic infection,” he continued, calling the vaccines “remarkably safe.”

However, on Wednesday, McConaughey clarified his remarks, explaining that he is actually not against vaccinating children.

“I want to clarify something that has been making the rounds in the press about my answer in a NYT interview I did the other day,” he said in a story posted to Instagram on Wednesday.

“When asked my opinion on the subject of children and vaccination mandates I stated, ‘I couldn’t mandate it for kids just yet.’ What was not clear is that I was referring specifically to the 5-11-year-old mandate,” he continued, adding:

“What is NOT true, and insinuated by click bait headlines since, is that I am against vaccinating kids at all,” McConaughey, who is teasing a potential gubernatorial run in Texas, said. “This is false. In fact, our eldest 13 year old son Levi is full vaccinated for COVID 19,” he revealed.

“I appreciate the ear and clarify, just keep livin,” the Dazed and Confused star added. 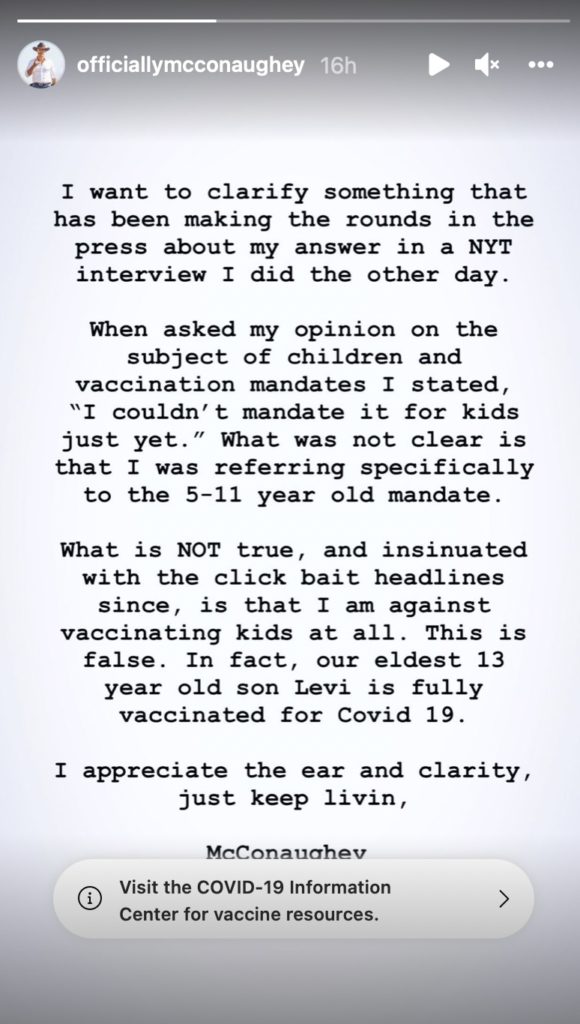 According to the American Academy of Pediatrics (AAP), “among states reporting, children ranged from 1.7%-4.2% of their total cumulated hospitalizations, and 0.1%-2.0% of all their child COVID-19 cases resulted in hospitalization.” The mortality rate among children is even lower, accounting for 0.00 percent to 0.26 percent of all COVID-19 deaths. According to AAP, “7 states reported zero child death,” and “in states reporting, 0.00%-0.03% of all child COVID-19 cases resulted in death.”