The United Nations has blamed human-induced climate change for mass migration as its COP25 convention on climate change lurches into gear in Madrid Monday.

“Climate change and displacement — how are they linked?” the U.N.’s migration office (UNHCR) asks in a new one-minute video.

“Most are displaced inside their own countries, but people may also cross borders to find safety,” the text states. “Climate change can also intensify conflicts as people compete for scarce resources.”

“When disasters interact with the effects of conflict and violence, some people fleeing in this context may become refugees,” it says.

As a human interest story to witness this depravity, the UNHCR inserts a short clip of a Zimbabwean woman named Precious Ryrhayo, who was forced from her home because of flooding.

“I was sleeping then water falls away inside of the house. Then we wake up and run away,” Ms. Ryrhayo declares.

While flooding was clearly the cause of Ms. Ryrhayo’s displacement, is it accurate to say that climate change was the culprit?

Curiously, according to the Zimbabwe Meteorological Services Department, the country has actually experienced a slight decrease in average yearly rainfall for the more than 100-year period between 1901 and 2006, so while Ms. Ryrayo undoubtedly experienced the effects of bad weather in the form of flooding, it is thoroughly unscientific to blame that event on climate change.

If anything, that flood would have been less likely now than 100 years ago.

All can agree, however, that the real cost of climate change must be measured in terms of its impact on human lives. One stark metric for such an accounting is annual deaths from extreme-weather events, since the death toll represents the ultimate impact on human beings. What we find, however, is that weather-related deaths have plummeted in the last 100 years to a mere fraction of their previous numbers.

In the year 1900, 1.27 million people died from extreme-weather events, whereas in the last decade, the average deaths globally from such events was 60,000, despite the fact that the world’s population has increased five fold, from 1.6 billion in 1900 to 7.7 billion in 2019.

Put in other terms, if we look at the number of deaths from extreme weather events from the 1920s to the present day, we find that both deaths and death rates have declined exponentially. 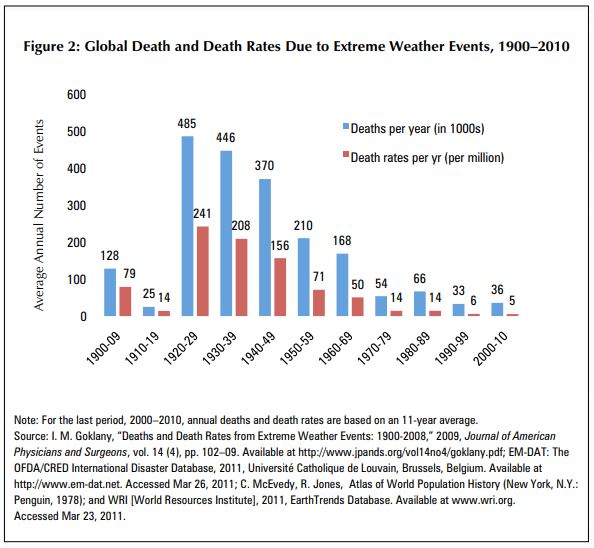 One undeniable conclusion from this data is that the human race is coping extraordinarily well with extreme-weather events, regardless of whether they are increasing.