Michael Mann, arguably the world’s no. 1 climate alarmist, writes Wednesday that he is “watching climate change in action” while on holiday in Australia.

In a Guardian essay titled “Australia, your country is burning – dangerous climate change is here with you now,” Mann, best known for his debunked “hockey stick” graph showing unprecedented 20th-century global warming after centuries of supposed level temperatures, says he is witnessing the devastating effects of climate change “first hand.”

Mann writes that he took his family “to see the Great Barrier Reef – one of the great wonders of this planet – while we still can.”

“Subject to the twin assaults of warming-caused bleaching and ocean acidification, it will be gone in a matter of decades in the absence of a dramatic reduction in global carbon emissions,” Mann prophesies.

The Blue Mountains, as well, “another of Australia’s natural wonders,” Mann laments, “is now threatened by climate change.”

“I witnessed this firsthand,” he states.

Mann does not explain how it was possible for him to witness climate change “first hand,” which would be difficult to do, since by definition climate change — unlike weather — takes place over long periods of time.

Instead of “vast expanses of rainforest framed by distant blue-tinged mountain ranges,” Mann looked out into “smoke-filled valleys, with only the faintest ghosts of distant ridges and peaks in the background.”

“The locals, whom I found to be friendly and outgoing, would volunteer that they have never seen anything like this before. Some even uttered the words ‘climate change’ without any prompting,” Mann declares, as apparent proof that he was witnessing climate change “first hand.”

Mann goes on to make proclamations that only a publication as ideologically compromised as the Guardian would think to publish.

“The brown skies I observed in the Blue Mountains this week are a product of human-caused climate change,” Mann states.

“The warming of our planet – and the changes in climate associated with it – are due to the fossil fuels we’re burning: oil, whether at midnight or any other hour of the day, natural gas, and the biggest culprit of all, coal,” he declares.

“When we mine for coal, like the controversial planned Adani coalmine, which would more than double Australia’s coal-based carbon emissions, we are literally mining away at our blue skies,” Mann says. (In his defense, he is using “literally” here to mean “figuratively” or “not literally.”)

Australians “need only wake up in the morning, turn on the television, read the newspaper or look out the window to see what is increasingly obvious to many – for Australia, dangerous climate change is already here,” Mann pronounces.

“Australia is experiencing a climate emergency. It is literally burning,” he says, before suggesting that it is time to vote in woke leaders who embrace the dogmas of the climate crisis.

“Australians must vote out fossil-fuelled politicians who have chosen to be part of the problem and vote in climate champions who are willing to solve it,” he states.

Mann may have missed the 2018 World Air Quality Report, published by IQAIR, which ranks the world’s nations by the cleanliness of their air, according to estimated average PM2.5 concentration (μg/m³).

Had he read the report, he would have found a curious fact: by and large, the cleanest air is found in first-world nations that have benefited from the cheap, available energy that he deplores. The countries with the most polluted air are mostly those that still have to benefit from this energy.

Though it is not the only factor (Kuwait, for example, is a notable exception), there is a remarkable correlation between air cleanliness and economic development, as well as between development and the availability of cheap energy. 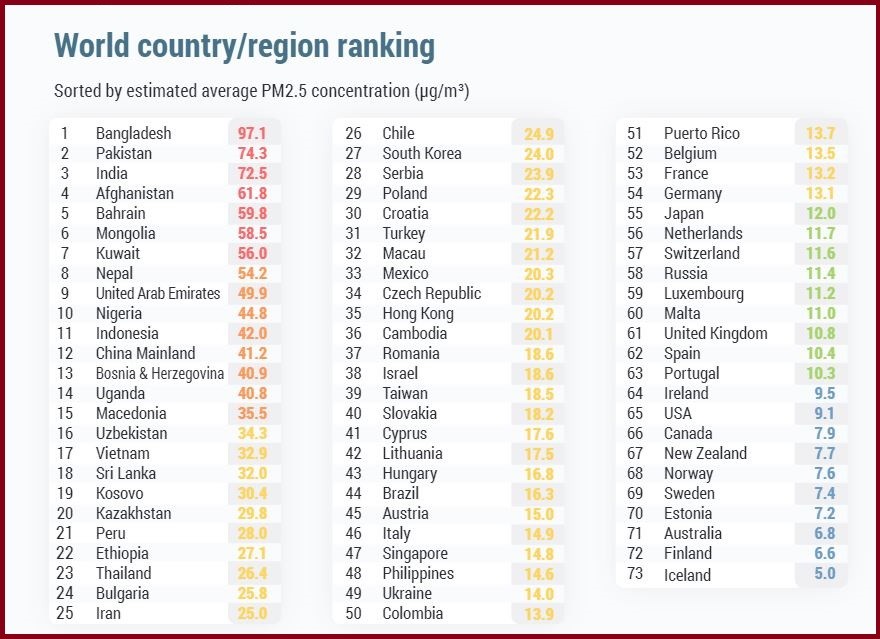