An MP has called for an investigation into the “improper funding relationship” between Britain’s Department for Health (DH) and an anti-smoking lobby group. Philip Davies MP made the demand after revelations that DH granted money to Action on Smoking and Health (ASH), which the group subsequently used to lobby for tobacco control measures under consideration by the department.

Documentation obtained by Breitbart London shows that ASH – a leading proponent of laws that would mandate standardised packaging of tobacco products as well as other rules intended to curb smoking – applied for and received a section 64 grant from the Department of Health to pursue its ‘Capitalising on Smokefree’ project.

The grant application indicates on Page 4 (below) that UK taxpayer funds would help to achieve the objectives by enabling ASH to engage in “media advocacy and lobbying” and running “training sessions for new DH officials.” It also suggests that grant money would enable ASH to participate in consultations with and advise the Department of Health on tobacco-related policy. 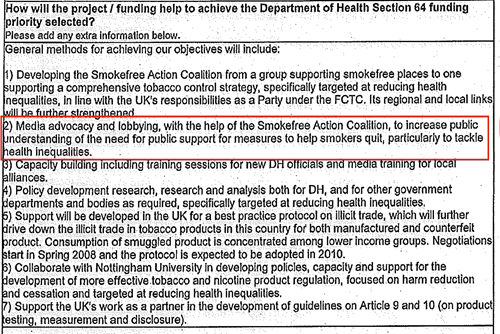 The documentation seen by Breitbart London shows that a stated ‘specific, directly measurable outcome’ of the project’s success would include the “extent to which ASH recommendations are acted on by policy makers.” The decision to fund the lobbying project was made on March 4th 2008.

In response to a question from Nicholas Soames MP on October 16th 2008, then Public Health Minister Dawn Primarolo MP stated that “none of this funding [obtained under the section 64 grant in question] is to be used for lobbying purposes.”

On June 15th 2011, Anne Milton MP, then Under-Secretary of State for Health, stated that “Action on Smoking and Health (ASH) has received funding from the Department in the past, through the Department’s ‘Section 64 General Scheme of Grants to Voluntary and Community Organisations’… None of this funding was, or could be used, for lobbying purposes.”

The newly unearthed grant application content will raise questions about the methods that have been used to push for policies ostensibly aimed at curbing tobacco use.

Philip Davies MP, said: “It is perfectly clear from the bid documents from ASH for Government funding that some of this money is used by ASH for campaigning activity to lobby the Government to implement ASH’s demands.

ASH considers plain packaging to be a top policy priority, and has been supportive of standardised packaging laws introduced in Australia and New Zealand.

Department of Health personnel have allegedly long been supportive of proposals to require plain packaging, according to opponents of the regulation.

The previous, Labour government rejected plain packaging, and the current coalition government had, up until recently, shown no interest in pursuing it.

However, in the wake of accusations that the Conservative Party is being privately lobbied by its campaign guru Lynton Crosby, the push for plain packaging has gained new traction. The government is now likely to mandate standardised packaging of tobacco products, eliminating the capacity for logos and other branding to be used on them, as of spring next year.

Critics have noted that the move is a politically cynical one, pursued in the run-up to the 2015 general election, and grounded in a desire to avoid appearing beholden to the tobacco industry, as opposed to facts, data and evidence. Several studies show that in Australia, the only country that has fully introduced it, plain packaging has failed to reduce smoking, but has spiked black market sales of tobacco product.