TOWER HAMLETS, London, UK – Yesterday the Guardian reported that the black flag most commonly associated with terrorist organisation ISIS, or the Islamic State, was flying outside an East London council estate. Rajeev Syal reported on the issue from the block of government housing in one of London’s most highly Muslim-populated areas. He wrote:

The flag bears similar writing to the jihadi flags that have been flown by the extremist group in Iraq and other jihadi groups since the 1990s. When the estate was approached last night, a group of about 20 Asian youths swore at Guardian journalists and told them to leave the area immediately. One youth threatened to smash a camera.

When a passerby tried to take a picture of the flag on a phone, one of the gang asked him if he was Jewish. The passerby replied: “Would it make a difference?” The youth said: “Yes, it fucking would.” Asked if the flag was an Isis flag, one local man said: “It is just the flag of Allah.” But another man asked: “So what if it is?”

Breitbart London went to the Will Crooks Estate in Poplar today to investigate. When we arrived, the flag had been taken down, and journalists were milling around looking for people to speak to.

Though cautious when speaking to us, residents were quick to point to the work of a nun, Sister Christine Frost, in taking the flag down.

What remained on the dilapidated, ghetto-like estate was a tatty, torn, Palestinian flag fluttering at the entrance, emblazoned with the shahada – the first pillar of Islam that states ‘There is no god but Allah, Muhammad is the messenger of God’. 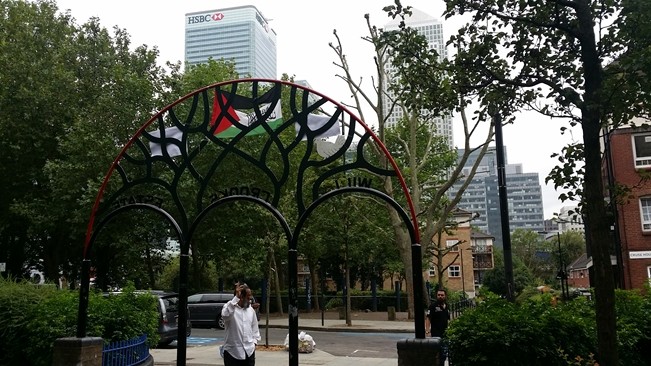 But residents told Breitbart London that the ‘black flag of ISIS’ spotted by the Guardian was in fact something else. They claimed, “It wasn’t the ISIS flag. It was similar… If you really want to know what it was, it was the shahada in white on a black flag”.

But the shahada in white on black is indeed loosely associated with ISIS, and has been spotted being flown by their followers. Moreover, the flag is al Nusra Front, an organisation that is also a jihadist terrorist organisation, though has persistently fallen out with, and even fought against ISIS in Syria. The confusion appears to be founded in the Guardian’s reporting on the matter. Mr Syal at the Guardian was not available for comment at the time of publication.

One elderly gentleman walking around the estate which was named after a famous socialist Member of Parliament told Breitbart London that he believed the flag was erected by youths in the area: “Some young boys around here, you know, they are playing with fire. They don’t really know what they are doing. Trying to be hot shots”. Though it appeared that they weren’t the only ones with access to the black flags.

Two gentlemen outside of the kebab shop outside the estate told us, “Some people went to one of the free Gaza protests and must have brought it from there. It has been up for a couple of weeks but no one paid attention until someone tipped the Guardian off.”

When he found out that other members of the media were present, including Sky, the Evening Standard, and BBC, he said: “Oh yeah the ones who support the fascists [in Israel].”

“What’s wrong with flying the Palestinian flag?” he asked, though no one had made any reference to that flag in particular. It remained up.

Walking around the estate it was evident that many of the people who lived there were unemployed and living on benefits. Dozens of men flooded from around the estate into a ramshackle, makeshift mosque on the adjacent street, ready for Friday prayers. It is easy to see how such a place can become insular and ghettoised.

Speaking to other members of the community, Breitbart London heard that they felt demonised by the “mainstream media”, excusing the flying of the black standard by saying: “if I robbed a house with the Union flag in my pocket, does that make the flag bad?”

THE WILL CROOKS ESTATE: The Parallel World At The Heart Of Our Capital City

by Andre Walker from East London

The gleaming skyscrapers of Canary Wharf loom large on the skyline, but the Will Crooks Estate is a world away from the hundred thousand City workers who also occupy the London Borough of Tower Hamlets.

Dozens of young Muslims while away their days hanging around the Free Gaza banners at the entrance to the estate, the only break to the monotony is the trudge to the makeshift wooden mosque five times a day.

This part of East London has always been the destination for recently arrived, and impoverished immigrant communities. It was where the Huguenot Protestants went when they were discriminated against in Catholic France, and where many Jews first setup their textile businesses before moving further afield. 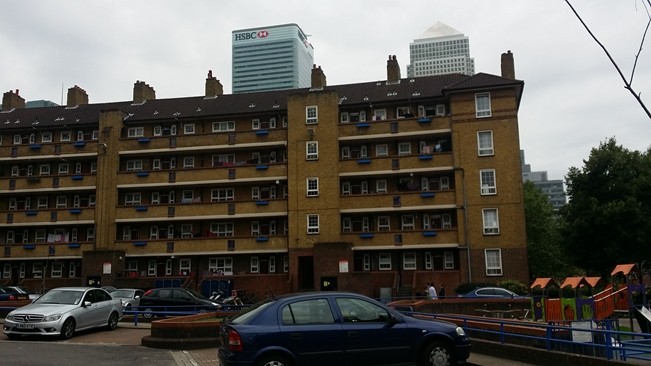 Today the cultural, religious and economic divide between Bangladeshi Muslim immigrants and the bankers that make London a global economic powerhouse could not be more stark.

The people here speak Bengali, worship Allah, and those who are not unemployed seem to be minicab driving. Fewer than 10 percent of the residents of Tower Hamlets work at Canary Wharf, and this figure is even less on estates like Will Crooks.

At Canary Wharf most people vote Conservative, but this estate is the territory of Lutfur Rahman, the Mayor accused of having extremist links and who is widely accepted to favour Muslims over other residents.

There is an old saying “London is not really England”, never does it feel truer than on the Will Crooks. This is a place with an incredibly distinct and foreign vibe. Can Britain survive having such a huge cultural divide in the heart of its capital city? If the debacle around May’s election of the Mayor is anything to go by, it would seem not.