The Italian Navy and Coast Guard have enjoyed a busy weekend in Europe’s internal sea as a spike in migrants fleeing destabilised north Africa and other nations beyond by boat led to an enormous rescue operation that saw 2,164 migrants recovered and brought to Europe.

The volume of human traffic trying to gain entry on Sunday to the European Union on ramshackle boats in crossings organised by criminal human traffickers that can cost thousands of Euros per ‘ticket’ was so great that at one point a single Italian Navy warship had over 500 migrants on-board. The remainder were picked up by a collection of police, civilian, and European Union funded coast-guard vessels.

In a remarkable and disturbing turn of events, the Italian government has reported one of its coast guard patrols came under attack while it was in the process of emptying on of the migrant boats. As soon as its human cargo had been unloaded onto the lightly armed coast guard vessel, a speed boat approached from the Libyan coast and its crew, armed with AK47 assault rifles, demanded the Italian officers return the smuggling boat to them, reports theLocal.it. 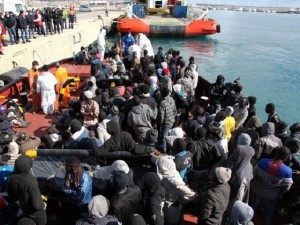 Migrants are brought ashore in Italy at the weekend / AP

The scale of human traffic now crossing the Mediterranean is now almost without precedent in history, with tens of thousands arriving every year. Nine-hundred more were recovered by the Italian Navy on Friday alone, a number which is in addition to the unknown number of boats which cross the sea, which is one of the worlds busiest, undetected.

Those who choose to make the crossing face being charged extortive amounts to escape chaotic North Africa by human traffickers, only to be put on unseaworthy boats with no guarantee of reaching Europe. Three hundred died in just one incident last week after a condemned ship used for human smuggling broke up in bad weather. A total of 3,200 died attempting to gain access to Europe just last year, and 2015 is promising to be a record year.

For some, the cruel sea is among the least of the worries of the people who put their lives in the hands of the traffickers. Italy has just sentenced one criminal smuggler to thirty years in jail after he abused and raped a number of young girls he trafficked from Somalia to Italy. Mouhamud Elmi Muhidin, was also charged for abandoning a sinking migrant ship he was running in which over 300 drowned.

Although the European Union-backed operation ‘Mare Nostrum’ is run as a humanitarian mission designed to alleviate the suffering of those crossing the Mediterranean, the present state of affairs is a far cry from the comparable situation in Australia, which had also been struggling with large numbers of illegal migrant arrivals by boat.

Since taking power in the country, Prime Minister Tony Abbott’s Liberal (conservative) government has turned around a situation that saw hundreds of boats attempting the journey every year, to a point where only one illegal boat attempted, unsuccessfully, to enter Australia in 2014. By using the Royal Australian Navy to turn back all boats attempting to make the crossing, rather than undertake what some Australians call “European style” rescues, the state-funded safety net that encourages risky attempts to sail has been removed. 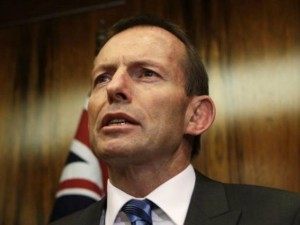 It was estimated in October last year that the policy of turning back migrants had saved the Australian taxpayer $2.5 billion.

Writing in The Australian, one commentator said of the successful policy of ‘turnarounds’: “While Australia will still be one of the most generous societies in the world to refugees, they will arrive in an orderly and lawful manner and be chosen by Australian authorities… In six years of Labor government, more than 50,000 people arrived illegally by boat with a steady and alarming increase over the years. Hardly any were sent home”.

In an unusual volte-face, the Australian Labor party, which presided over years of migrant deaths by drowning as thousands from as far away as Iraq and Afghanistan tried to gain access to the nation has even considered backing the turnaround policy. If they do sign up to continuing the Naval Patrols which escort the boats home, it will be a major victory for Abbott who has been constantly attacked by the mainstream media for his traditional conservative policies. 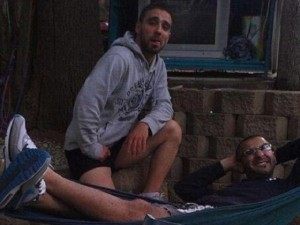 Mohammad Kiad, 25, and Omar Al-Kutobi, 24, appeared ordinary and well adjusted new citizens but harboured a hatred towards Australia and planned to murder blonde people “in the name of Allah”

Despite their apparent willingness to concede the migrant boat policy, some government members accused the Australian Labor party of duplicity on the matter, after admitted they would only accept the new regime with the agreement of the government of Indonesia, a presently unlikely prospect. Immigration minister Scott Morrison remarked: “Labor says they have an open mind on turnbacks. The only thing that will be open under Labor is our borders”.

Abbott is now looking at assessing those thousands who arrived under the previous government, screening and potentially removing those who are found to have arrived illegally. The policy has been given new impetus after it emerged one of the would-be terrorists arrested in Australia yesterday had arrived on a false passport during the Labor era of open borders. Mohammad Kiad along with an accomplice planned to murder blonde people by stabbing them in the kidneys, but was stopped by police after they bought hunting knives.