A Bangladeshi-American blogger who spoke out against religious extremism has been hacked to death in Dhaka, Bangladesh. Avijit Roy was found in a pool of blood last night after he was attacked by a gang armed with cleavers, who also critically injured his wife, Rafida Ahmed.

The couple, who usually live in the US, had attended a book fair in Bangladesh before they were set upon. Mr Roy died at the scene, while Mrs Ahmed is currently in a critical condition in hospital. No one has been arrested, although a group calling themselves Ansar Bangla 7 have claimed responsibility. They said Roy “was the target because of his crime against Islam”.

The Daily Mail reports that Roy was a naturalised US citizen who was a prominent opponent religious intolerance. He had founded a Bengali-language blog, Mukto-mona (Free Mind) that espoused atheism and scientific inquiry. Roy wrote last month that atheism was a “rational concept to oppose any unscientific and irrational belief.” 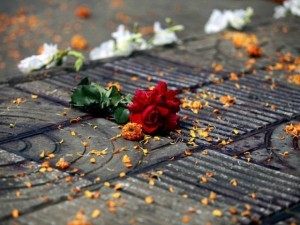 Flowers were left at the scene of the murder (AP)

Baki Billah, a friend of Roy, said that Roy had earlier been threatened for his writing. “He was a free thinker. He was Hindu but he was not only a strong voice against Islamic fanatics but also equally against other religious fanatics.

“We are saddened. We don’t know what the government will do to find the killers. We want justice.”

Although Islam is the official religion of Bangladesh, the country is governed by secular laws based on British common law, and Prime Minister Sheikh Hasina has said she will not tolerate religious extremism.

A number of similar attacks have previously taken place in the country. In 2013, blogger Ahmed Rajib Haider was killed outside his home in Dhaka after also speaking out against religious extremism.

In 2004, writer and university lecturer Humayun Azad was seriously injured while returning from the same book fair as Roy.