We live in listless times, when complaining and campaigning have becoming something of a new religion for those whose lives are devoid of any true meaning or worth.

So it is that, in an era when most life-threatening problems have been solved in the West, Social Justice Warriors construct and angrily confabulate new, First World Problems.

It’s become something of a 24/7 Twitter soap opera, an X-Factor for the perpetually offended: a constant, noisy audition to a global network of like-minded Offendotrons who encourage, cajole and reward their noisiest foot soldiers with a buffet of good boy treats in the form of favourites and retweets.

This week, in the latest chapter of this pantomime, the victim-du-jour was Protein World, a hitherto largely unheard of, protein supplement company.

Ten days ago, the British company launched a widespread billboard and poster campaign on the London Underground that saw 74 of the giant Tube ads, and 4000 in-carriage ads, they proved hard to miss.

In it, Australian model Renee Somerfield posed alongside the phrase “Are you beach body ready?”

And it didn’t take the SJWs and feminists long to once again strap in to their high horses and go to war. Soon, the posters were being crudely vandalized to instead read, among other things, “You body is not a commodity”.

Central to the protest was the well-aired modern feminist lexicon of “objectification” and “fat shaming” of women.

Soon, a veritable Twitter storm raged. By Tuesday, online feminist magazine Vagenda was encouraging users to tweet in pictures of vandalized posters. By Wednesday, under another defiled poster, they declared, “We love London! F*ck patriarchy!”

Next, despite any reports of real-world incidents, one claimed the ads “purported violence towards women” and by Saturday morning, one emboldened SJW went a stage further, and ominously posted the company’s address on Twitter and encouraged “feminists with hammers” to “smash the patriarchy”. 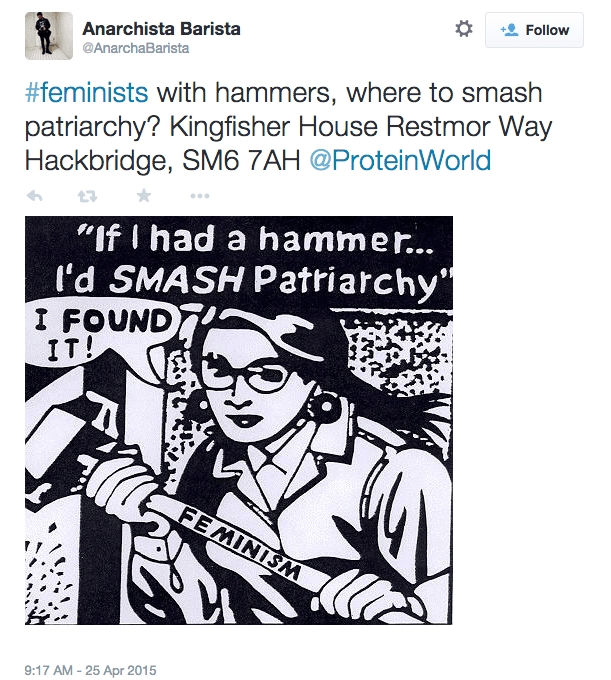 For good measure, he added “@ProteinWorld can burn to the ground for all I care” causing other concerned Tweeters to alert the police and me to contact the SJW for a named, photographed interview – an approach he declined, DMing me, “I’m cautious of doxers. I’d rather you talk to a girl”.

We’ve been here before, of course. Last November lingerie giant Victoria’s Secret pulled their ”perfect body” campaign from the store’s shop windows after a meagre 27,000 protesters bullied them into it, leaving observers with the curious conclusion that these campaigners are the agent provocateurs who would never be seen dead in Agent Provocateur.

But, unlike the international lingerie conglomerate, Protein World – a small company of only 18 months existence – has decided to take a stand: they are resolutely refusing to pander to a “vociferous, vocal minority of protesters.”

Now, it seems, freedom of expression spokespeople have found an unlikely vanguard in Protein World.

Speaking to Breitbart, the company’s defiant Head of Global Marketing Richard Staveley says: “The campaign absolutely, categorically will not be pulled by Protein World. We have 300,000 happy customers and we will not pander to this a particularly vociferous minority.

“There’s no body shaming going on. Genuinely, 100 per cent this was driven by talking to our female customers and asking them what they want.

“As for the vandalising of our posters, a lot of what we have seen has been PhotoShopped, so they’re not even real defacements. I’d be alarmed if people are actually clamber across train tracks to deface posters and put their lives at risk.

“My position is: we won’t stand for that and TFL [Transport for London] are working with us on this. We are compiling admissions of vandalism against us and we will look into them. I don’t see us having any problem with us reporting individuals for vandalising our property. The law on this is clear.”

And in a comment that will surely pour vinegar into the protester’s wounds, Staveley claims the protest has actually helped his company’s brand profile and increased sales.

“I couldn’t have dreamt or hoped of having our advert reproduced more times across the news networks and social media as it has been done,” says Richard. “This protest has been absolutely phenomenal for us and entirely counter-productive for them.

“At the height of the protest, myself and the CEO took over the Twitter feed from our usual girl, and it was hilarious. They were saying, “ooh, somebody’s getting fired tomorrow” – but it was us: the CEO and head of marketing. We had a good chuckle at that.

“We’re not a faceless corporation, and 99 per cent of the time it’s great. At times we will be sailing close to the line – and perhaps overstep the mark. But that’s entirely part of the strategy.

“We were answering these tweets from the airport in New York and by that time it was ‘bugger off, this is stupid’.

“That’s the brand. By this time, people were watching our Twitter feed as a source of entertainment. Our customers adored it and now are even more behind the brand. We’ve added 5000 new customers. Sales are booming.”

So, in affirmation of all the campaigners haven’t learned since the days of 1920 Prohibition and through punk rock: controversy and banning orders create demand and shift units.

But in a further modern twist, with echoes of the #GamerGate furore, it appears consumers are rounding on the SJWs and voting with their wallets.

If Protein World is to be believed, punters are actively purchasing the products the campaigners want banned, as a sort of protest against the protest. And the protesters are being played with in real time, to entertain customers and increase brand loyalty. 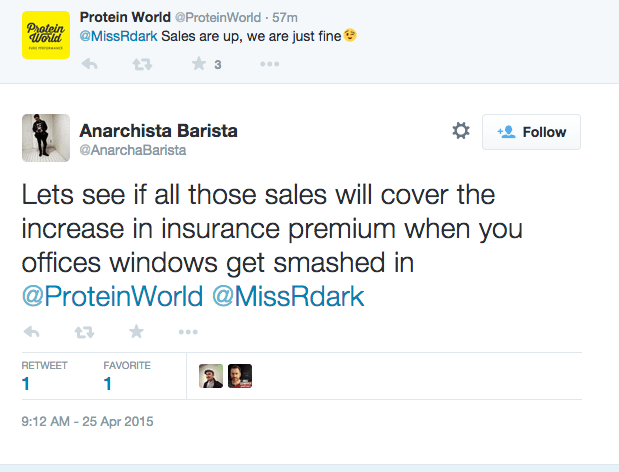 And in the final, delicious slapdown for today’s trigger-happy SJWs: Is an online protest and a Change.org to ban a product actually becoming the essential modern marketing tool? And are the SJWs simply part of the marketing machine for the products they so vociferously loathe?