The BBC is offering training for potential new weather presenters – but instead of requiring knowledge of meteorology the applicants must instead be disabled.

An official advert by the publicly funded broadcaster said the BBC does not currently have any disabled weather presenters and is ‘actively seeking to improve on-screen diversity’.

‘Do you want to share your passion for the weather by presenting weather bulletins? Do you have a disability?’ it asks.

The position, which is a training post and does not have a guaranteed job at the end of it, says the BBC Academy is providing the free opportunity to ‘help men and women with a disability feel comfortable appearing on television, radio and online presenting weather bulletins.’

‘We will be offering a short training course which will provide an overview of working in the BBC Weather Centre and give practical experience in presenting weather bulletins to camera.  You will meet established weather presenters and members of the production team and will learn what it takes to present BBC weather bulletins.  You will be eligible to apply for future vacancies in the team’ it advises. 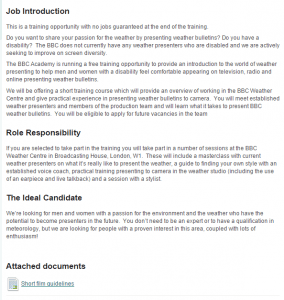 According to the Daily Mail, staff are said to be “furious” about the advert and described it as a box ticking exercise which sounds like something from the script of spoof comedy programme W1A.

In a recent episode of the show, bosses hired Muslim Sadiq Iqbal as a weather presenter because they wanted a bearded man to keep the broadcasting watchdog happy.

A BBC insider said it felt like “political correctness gone mad on the part of the BBC.”

“Surely it’s much more important for the weather to be presented by an expert, rather than someone with a disability?

“Everyone supports disabled people getting great jobs but it makes sense that they still have the right experience and qualifications. This feels like a box-ticking exercise.’

“W1A is meant to be a parody, not a documentary.”

Positive discrimination is permitted in job advertisements: previously the BBC has recruited for Black and Ethnic Minority candidates only for sought after journalism training programmes.

Most BBC weather presenters have qualifications relevant to the job, including Peter Gibbs who is a polar meteorologist, and Philip Avery who is a navy weather expert.

Ms Etheridge, who herself is disabled, said it was an “awful way to recruit because the eventual successful candidate will always feel they only got the job because of their disabilities and not for their actual capabilities, experience and talent.”

A BBC spokesman said: ‘We are not advertising for a disabled weather presenter. This training opportunity is open to men and women with disabilities who have a passion for weather and the environment and who have the potential to become weather presenters in the future.

‘There are no jobs guaranteed at the end of the training. There is nothing ‘PC’ about offering training to people with disabilities.’