A report by pollster ICMUnlimited has called into question the neutrality of the proposed European Union referendum question, suggesting ‘acquiesence bias’ could hand victory to the Europhiles.

Claiming the chosen question for next year’s planned referendum, “Should the United Kingdom remain a member of the European Union?”, contained “cognitive clues” that would “helpfully push people in a singular direction down the Yes path”, ICM ran three sample polls with differently stated questions and found the chosen ‘positive’ wording gave the ‘yes’ camp a four-point bonus.

Worryingly for those campaigning for a ‘Brexit’, the vote to remain in the EU won with all three wordings, leaving a lot of work to be done in convincing the British people that life would be better outside the European Union remained.

Explaining the biased wording of the chosen question, ICM broke down the individual elements and explained first and foremost that most people carry a subconscious “acquiescence bias”, an instinctive desire to agree or say yes to questions. This, it is claimed, goes some way to explain why when asked the government question 59 per cent agreed, yet when asked the alternative “should the UK leave the EU?” only 57 per cent agreed.

More strikingly, when participants from the 1,975 sample were asked a question without a simple yes or no answer, but instead were asked to state ‘remain’ or ‘leave’, the difference was even more pronounced, with the status quo lead reduced from 18 to 10 points. 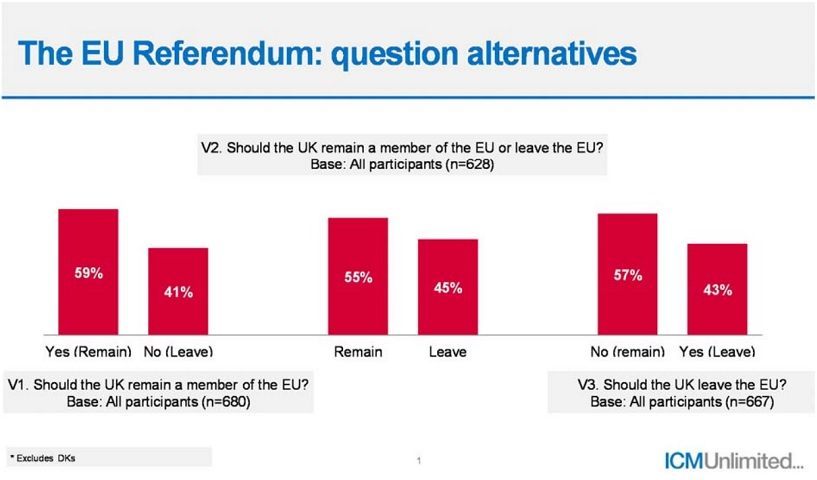 On the friendly, affirmative language used in the question chosen by the government the report states: “the question also points to the fact that we are ‘members’ of the European Union. True enough, but being a member of something is usually ‘nice’ – we make a choice to join something because we believe there must be associated benefits otherwise why would we already be in?

“It’s a cozy, warm thing to be, a member of something, like the golf club, mother and toddler support group, gym, political party – whatever your preference. It’s hard to conclude that this use of phrasing is superior or more neutral than asking, say, whether we should “stay in” the EU”.

The shift in voting pattern as the question changes raises the prospect that should the referendum cut so close it sits within a few percentage points, the outcome could be challenged by the losing side expressing discontent over bias. As the report notes, it could be claimed the outcome was “a function of the referendum question, rather than a genuine reflection of the public’s position on British membership”.