Left wing, self- styled ‘revolutionary’ Russell Brand has found himself accused of hypocrisy after it was discovered the sweatshirts he is selling have been made in a sweatshop.

The multimillionaire comedian claims that the company which provides him with the items of clothing which sell for £60 are ‘ethical’ and work to the ‘highest environmental standards’, the Daily Mail reports.

But in reality, the label shows the clothing is made in Third World factories by workers earning just 25p an hour: a huge embarrassment for the man who claims to be an anti-capitalist and advocates the overthrow of ‘corporate tyranny’. 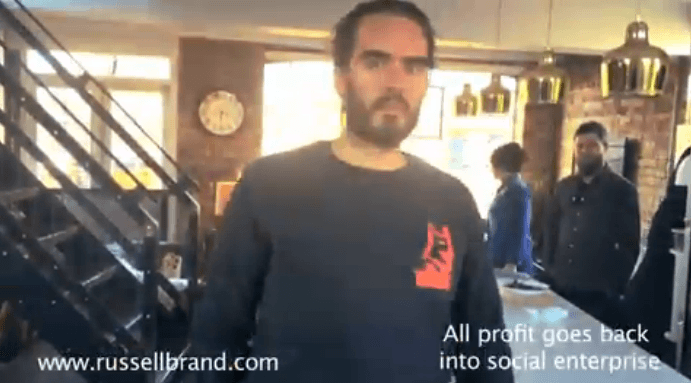 Brand wearing one of the sweatshirts

He also promises that all of the profits made from his merchandise go charity and “he doesn’t make a penny”. And it’s only pennies which people working to fund his lifestyle earn, with the workers paid only 4p an hour more than the minimum wage in Bangladesh – a country notorious for its appalling factory conditions.

Staff said they work six to seven days a week and yet can barely afford to support their families. One worker, Nishat Begum, said her life is little more than work and sleep.

But if there is a backlog of work, staff have to do overtime sometimes for an extra four to six hours on top of their full day shift.

A bus picks staff up from homes nearby to take them to the factory in Gazipur in time for their shift to start at 0800hrs.

Anna McMullen of the campaign group Labour Behind the Label, said: “Many garment-producing countries have minimum wages that are less than half of the value of a wage that is enough to allow a family to live with dignity.

“Paying even TK2,000 (£16) more than the minimum wage in Bangladesh will still mean that families live in poverty.”

Brand, who is worth an estimated £10 million, says the money made from the merchandise is channelled into ‘good causes’ – although details of these are not disclosed on the website. But details on the receipt of a £65 sweatshirt showed just £1.37 went to those causes with Brand not clarifying if this is the total profit made on each item. Another receipt for an item costing £60 did not provide any information on what would be passed to charity.

The findings led to Conservative politicians calling Mr Brand a “hypocrite” and asking why he did not employ unemployed workers in Britain.

Tory MP Conor Burns said: “This proves what we knew all along that Russell Brand is a Grade-A hypocrite” while his colleague Andrew Percy suggested he could “trade his millionaire lifestyle for those of workers in Bangladesh who get paid a pittance and live in appalling conditions.”

He also said he “could have his merchandise made in Britain and support jobs for young people here.”

Brand recently attacked Walmart for failing to pay US workers the minimum wage saying it was “hard enough doing them (sic) sort of jobs without shafting people for every single penny.” Yet Bangladesh is known for its sweatshops which are used by large companies to widen profit margins by keeping costs low. The conditions were highlighted after the Rana Plaza tragedy where 1,134 people died after an eight-storey factory collapsed in 2013.

In an interview Brand said “the constant subjugation of the world’s poor, the outsourcing of manufacturing industries into the Third World” was part of the corporate tyranny he wanted to end.

Brand has refused to answer questions about the sweatshirts, referring them all to his lawyers. They admitted he did not know who his merchandise had been made by or where they were made.

They said that not all the sweatshirts are sourced from the same company and that Brand will investigate the conditions and “if the Mail’s allegations are correct,” will “ensure that these garments are sourced in a different way.”

Meanwhile, The Charity Commission has urged Brand to clarify where the money went. Last year his website said money would go to the Russell Brand Foundation but this has been removed and the Charity Commission said it was not an officially recognised charity. Brand has not responded to questions about the Foundation.