Unemployed chef Andy Bell is standing for election tomorrow, but has been kicked out of the Labour Party with only hours to go after screenshots of his anti-Catholic Facebook activity became public. 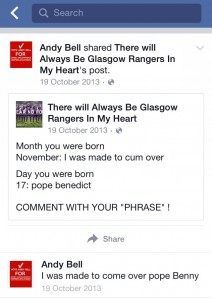 The father of two had been selected to fight a by-election, but one disgruntled local made it his business to meticulously go through years of Bell’s old Facebook. Remarkably, the Labour Party decided to suspend the candidate with only hours before the vote on the strength of the posts – which were public and free for all to see.

Although the posts have now been deleted, Breitbart London has screenshots of Bell’s ‘controversial’ comments, which largely revolve around his involvement and support of a loyalist pipe band in Scotland. The band had a strong pro-United Kingdom and Protestant flavour, qualities which clearly left him out of step with the local Labour Party.

The Daily Record newspaper reports the comments of a Scottish Labour Party member who said of the suspension: “Andy Bell has been suspended by the Labour Party pending an investigation. Although it is too late for Mr Bell to be removed from the ballot, the party has withdrawn any support for him as a by-election candidate.

“Religious bigotry has no place in today’s society, not that I think it ever had, but it needs to be stamped out”.

Breitbart London spoke to Falkirk electoral services who today confirmed that the ballot papers had already been printed for tomorrow’s by-election and could not be changed, so although Bell had lost the support of his party he would still be running as the ‘Labour’ candidate on the ballot. If he wins the vote, he will enter the council as an independent – leaving Labour with no chance of winning the seat at all.

Many of the reports surrounding his suspension have cited Bell’s Facebook postings making light of “child abuse”.

The only post that Breitbart London could obtain that fulfills this description is a Facebook ‘game’ that Bell shared with his followers back in 2013. By looking up your date of birth and the colour of your trousers, a humorous if slightly politically incorrect phrase could be constructed.