STOCKHOLM, Sweden – A protest timed to coincide with the new term of the Swedish parliament has called on the government to resign in shame over their failure to manage mass immigration.

The meeting had been planned to take place in Stockholm’s main square, but heavy rain forced the group into a neighbouring shopping centre on Tuesday, under the watchful eye of local police. Although the rally wasn’t endorsed by any political party, there is a clear feeling of support for the Swedish Democrats (SD), the nation’s successful anti-immigration and euro-sceptic party.

Jan Sjunnesson, local teacher and author who this year organised the infamous LGBT march through Stockholm’s heavily Muslim areas which rendered left-wingers worldwide furious was one of the speakers. Sjunnesson told Breitbart London that a cosy “gentleman’s agreement” had rendered the Sweden Democrats the only opposition party in Sweden. He said: “what we now have is seven parties, who have made this left-right bloc in December to oppose the Sweden Democrats”. 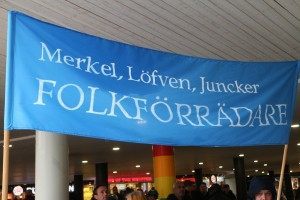 SD were last week frozen out of cross-party talks on how to deal with the migration crisis, the only political party with members of parliament in the country to not be invited.

The placards and badges worn at the event convey the general mood – one tells the Prime Minister to “resign or go to hell”. Another mocks Sweden’s right-wing and centre-right parties for getting into bed with the left wing and coalescing over mass migration.

Speaking to the ordinary people who had taken time off from work to attend the rally, many reacted with surprise to find a journalist at the event – the usual reaction of the Swedish media to such events is to smother them with a blanket of silence. When asked what must be done to save Sweden every response is the same – close the borders, and do it yesterday.

With her husband at work and children at school, mother of two Julia Nillson felt motivated to attend the rally – despite having no previous involvement with politics, and speak out in defence of her native land. Speaking to Breitbart London, Nillson said “I’m a Swedish citizen, and when I see the government standing by and doing nothing about the violence in our society, the no-go zones in Stockholm and Malmo, where fire engines and ambulances need a police escort to put out fires or help the hurt, I feel I have to do something. 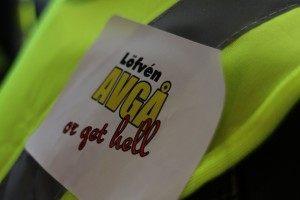 “The situation has gone too far. The old media lie about the ethnicity of rapists – recently there was a report about eight ‘Swedes’ who raped a native woman, but they weren’t Swedish. They didn’t even have Swedish citizenship, they just happened to live here. The media is lying, and I can’t stand by and do nothing any more.

“We should have more control over our borders, those people who genuinely need protection, who are fleeing from war, should be helped in Sweden. But if you take everyone, even the people who are violent to each other, you will start a war in Sweden too”.

Joiner and carpenter Tom had taken the morning off work to attend the rally, and was not at all shy to articulate his view closing the border should be the first priority of the government. He blamed the internationalist minded left-wing, who seem hell-bent on breaking down national borders and national identity, and wielded mass migration a tool to achieve it.

One attendee who asked not to be named said there was an element of risk associated with attending anti-migration protests. He said: “the left-wing are very used to holding demonstrations like this, and when they do they have the whole mainstream media establishment behind them.

“If you attend left-wing rallies you don’t run any risk with your employer, the media, your friends, nobody will complain. If you go here, you run a risk. If you are a member of a union, you will get fired if they found out you’re here. 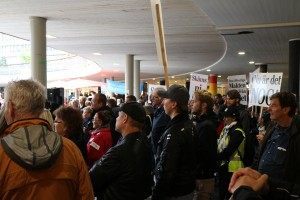 Standing in a shopping centre to avoid the rain, hundreds of Swedish patriots gathered to hear speeches and call on the government to resign / Oliver Lane / Breitbart London

“I decided a few years ago I’ve had a good life and I need to stand up for something that is about more than just me… it is time for the Swedes to fight for their existence.

“We’ve not been to war in centuries, we’ve not been threatened or invaded in a very long time. The Finns and the Danes were occupied only a generation ago, we never experienced that. It has made us complacent, cozy – we’ve had social democrats looking after us for half a century. But now these things are eroding”.

Despite the rising popularity of the Sweden Democrats, who have been placed as the potential single largest party in a number of recent opinion polls, they like the protesters in the square have been frozen out of national politics for the time being. Denied a spot to campaign outside the national parliament so not to clash with another protest by Kurdish nationalists on the same day, and starved of the oxygen of publicity by the Swedish mainstream media, proud Swedish patriots may soon find themselves outnumbered by new voters who arrive by train every day.

Mother of two Nillson wasn’t deterred though. Concluding her remarks, she told Breitbart: “I just want people around the world to know there are still Swedes who are willing to fight for their country”.