Lech Walesa, the former shipyard worker who famously helped bring down Communism in his native Poland in the 1980s has made his thoughts on the Europe migration crisis and religious beheadings clear in a remarkably frank interview.

Speaking to the Jerusalem Post, the former president of Poland, Nobel Peace Prize laureate, and human rights activist said he sympathised with people in Europe who expressed concern about mass migration. Yet his forthright views left even the usually unflappable broadsheet pre-emptively apologising for his words, calling his views “simplistic”and the man himself an “enfant terrible… a conservative homophobe”. 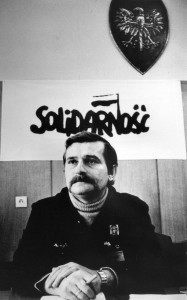 Lech Walesa in 1981 before the Communist government declared martial law, banned his organisation and exiled him for 11 months / Getty Images

Responding to a question on the “humanitarian crisis” presently engulfing Europe, Walesa told the Post:

“I understand why Poland and Europe fear their influx. They arrive from places where people are beheaded. We are worried that the same will happen to us.

“We in Poland have small flats, low salaries and meagre pensions. Watching the refugees on television, I noticed that they look better than us. They are well fed, well dressed and maybe even are richer than we are.

“It’s a problem. If Europe opens its gates, soon millions will come through and while living among us will start exercising their own customs, including beheading.”

While Walesa understood that in many European nations Poles are also immigrants, he articulated the widely held view in Poland and amongst its expatriates around the world that wherever Poles go, they respect local cultures and laws.

This was not the case with the migrants who have been coming to Europe for the past few decades he argued, remarking: “These immigrants are different. Even second or third generations – look at France, for example – who got good education and made money still turned against the host countries”.

Walesa also wasn’t afraid to have a sly dig at the young men who have left their homelands at a time when, in reality, they are needed there most.

Asked whether he had any sympathy for those coming to Europe, he spoke of his own experience of being a political undesirable in Communist Poland:

“I was offered by the Communist regime to leave Poland and become a refugee. I declined. I stayed on to fight for what I believed in. It’s true that part of the new refugees and immigrants leave because they fear for their life. But many also immigrate to improve their standards of living and quality of life.”

After he led an illegal protest against food prices in 1970, Walesa became a marked man in the eyes of the Communist puppet government and was under constant threat of intimidation, arrest, and exile by the secret police.

Walesa, awarded the Nobel Peace Prize in 1983 and elected president of Poland in 1990, had refused to meet fellow Nobel laureate Barrack Obama until last year, complaining that the award to the American president had been made before he’d even had chance to do anything.

The pair finally met in 2014 and Walesa conceded that despite the failures of Obama, he at least “does want to succeed”.