A rushed launch tonight for the awkwardly named ‘Vote Leave Take Control’ eurosceptic campaign tonight, with the added bonus of one of their founding members leaving the group just minutes after the BBC-briefed announcement:

Not the best of starts then for the group run by Tax Payers’ Alliance Chief Executive Matthew Elliott, who himself founded three groups – Business for Britain, Conservatives for Britain, and Labour for Britain – and then merged them all into “Vote Leave Take Control’.

It may come as no surprise to most that I prefer the Leave.EU campaign run by UKIP donor Arron Banks, which has already signed up tens of thousands of members, and attracted support from across the eurosceptic movement. Hence Mr. Elliott’s rush, I’m told.

At the time of writing, the VoteLeaveTakeControl.org website looks like it a stock Nationbuilder template with some grey text pasted into it. Marketing genius it is not. They’ve got 152 fans on Facebook, compared to Leave.EU‘s 160,000+. And there are other aspects that need addressing too.

The Vote Leave Take Control campaign says it won’t be paying salaries of more than £99,000 a year, so donors know their money is being spent on campaigning. Well, that’s awkward, and it shows that Mr Elliott and his friends are concerned with allegations popping up on the internet concerning the finances behind the last referendum campaign Mr Elliott ran: the NO2AV one.

But surely donors know that hiring the best and brightest means they have to pay for the pleasure. British politics isn’t flush with cash like that of our American cousins, but £99,000 a year in the campaign world isn’t fantastic either. Pay peanuts, get monkeys. Or so the web design would suggest.

I especially like the spin: “so those giving money to the campaign know that the money is going to the campaign – not to huge six figure salaries”. Yes, because £99,000 and £100,000 is a world of difference, right?

‘WE’RE NOT ESTABLISHMENT, WE SWEAR’

Being in the Westminster establishment is a frame of mind, not a postcode. So the fact that Vote Leave Take Control has gone to lengths to point out that it is based in SE1, not SW1, is a bit of a joke. They’re based in Westminster Tower, for goodness sake, directly across the river from the House of Commons. Closer, in fact, than the Leave.EU campaign in Millbank Tower.

And they’ve slipped up on the narrative already. It’s clever to point out that UK contributions to the EU could be spent building more hospitals and schools, but which hospital did they choose in their (admittedly slick) campaign launch video? St. Thomas’s of course, in Westminster. Right across from the Parliamentary terrace. Someone needs their £99,000 salary docked…

I’ve made a little map for you to show you just how overly sensitive and stupid this whole geographical argument is: 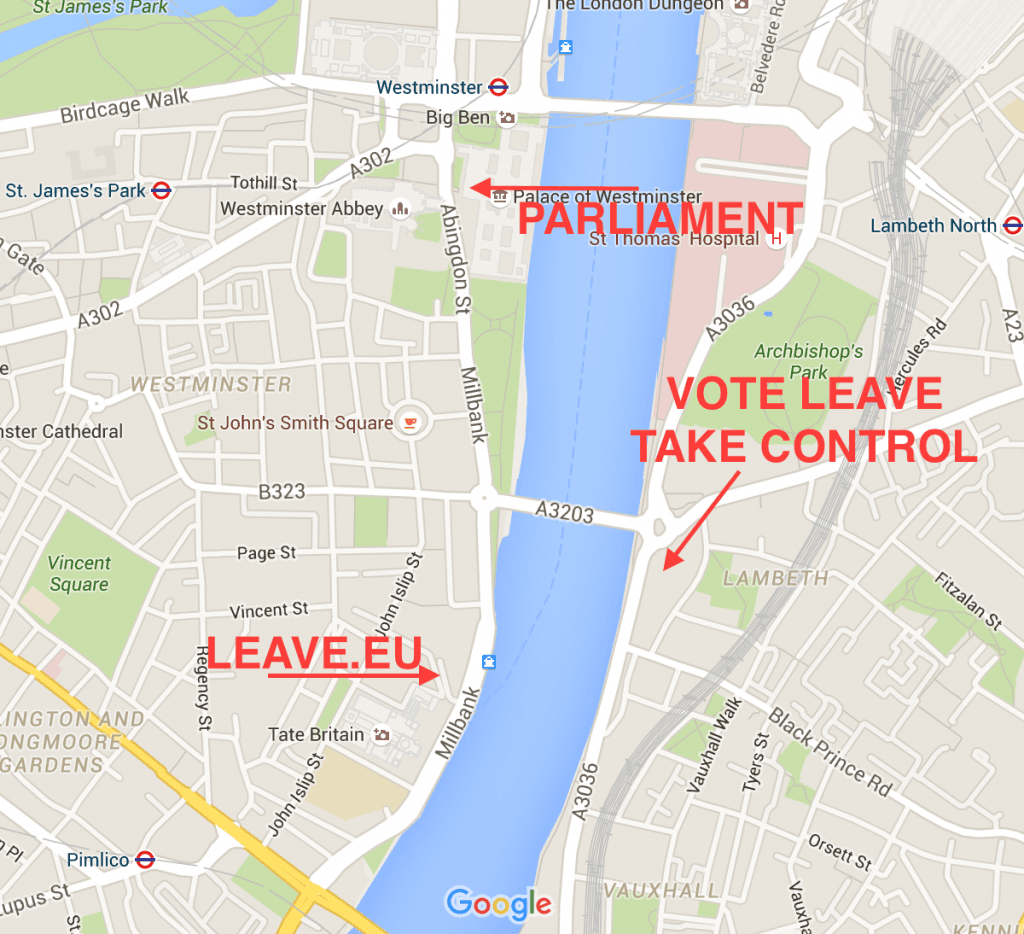 Mr Elliott will claim that his campaign should get the nod from the Electoral Commission because he has two Labour MPs, a UKIP MP, and a whole bunch of Tories on board. Therefore he’s the cross party campaign (expect to hear a lot about this). But Leave.EU will claim that they have voters of all political persuasions on board. Are Vote Leave Take Control going to argue that MPs are more important or significant than the voters who elected them? I’d like to hear that argument.

CAN’T WE ALL JUST GET ALONG, AND GET BRITAIN OUT?

Well, in short, no. Not yet anyway.

Believe me I want to see it happen as much as the next guy, but there are big Westminster egos in the way. That, and until very recently it was not clear whether or not Mr. Elliott intended to campaign for out. He’s been one of these “wait and see” types with regards the Prime Minister’s non-renegotiation from Europe. Once he realised someone else had stolen the march, he rushed his campaign launch, leading to the ghastly website and resigning peer, as above.

Bets were being hedged there, and now Vote Leave Take Control is paying the price.

An all round poor launch. But let us all hope that Leave.EU and Vote Leave Take Control will merge into a broader LEAVE campaign. That is unless certain people still find the idea of Nigel Farage – who let’s face it, almost single handedly led the country to this moment – too “toxic” (see the third paragraph, here).