“I thought there would be military and police everywhere but I haven’t seen it.” These were the first words the Sweden Democrats leader Jimmie Åkesson said to me as we began our walk around the Brussels “no go zone” of Molenbeek this week, just a few hours before police raided properties for the second time in the area in search for connections to the atrocities that rocked Paris and the Western world last week.

Jimmie Åkesson is 36 years of age – quite remarkable for a political leader whose party is currently topping the polls in the country. But he could easily pass for 25.

“I’ve been doing this for 20 years,” he insists, explaining that what motivates him today is the thought of bringing up his two year old son in a country that is “as nice” as he and his parents grew up in. 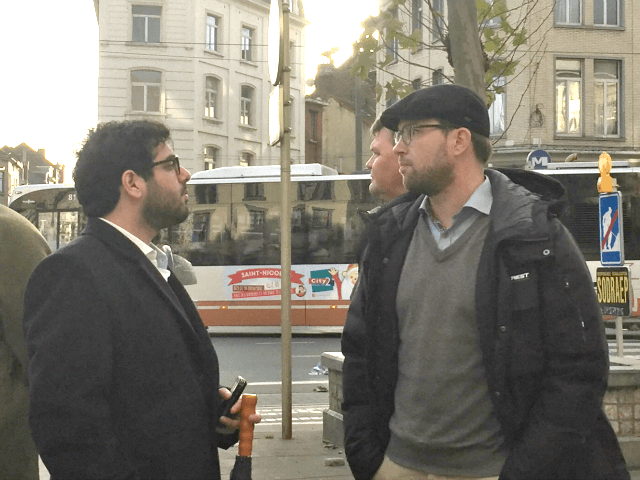 The Sweden Democrats – often maligned as a “far right” party, and even called ‘Neo Nazi‘ by the British Broadcasting Corporation (BBC) this month – represent the anti mass migration and Eurosceptic sentiment growing in the 10 million-strong Scandinavian country.

The party continues to grow, and new polling puts them five points ahead of their nearest rivals, the left-wing Social Democrats.

Does this mean that young Jimmie is going to be the next prime minister of Sweden?

“Probably not,” he admits, “but I hope I can have that much influence on the next prime minister. The new government that we have in three years will at least use the most important parts of our policies to make it a little better and to change the society in our direction. I’m satisfied with that. I have no need for being prime minister. I would rather be a carpenter or something like that. I’ve done it for 20 years because no one else did it.”

His honesty is admirable, but you get the sense from Jimmie that he’s stumbled into a strong position and doesn’t quite know what to do about it.

“Maybe I or the people I work with haven’t really realised what we have done or the development, but I think [we have] young guys who are very driven and very engaged… idealistic. We are almost the same, maybe the world around us looks at us in a different way. We are the only opposition in Sweden and I think we will remain the only opposition for some time.”

He tells of how he feels “insulted” by the European Union’s (EU) sprawling mass of buildings in Brussels, and how he once refused to pose in front of an EU flag for a Swedish journalist.

“I visited Brussels ten years ago, I haven’t been here much, it’s interesting to see the EU area and quarters. You talk a lot about the European Union at home but you have to see it”.

His party, like Britain’s UK Independence Party (UKIP) – which it is partnered with in the European Parliament – believes “we have to co-operate, we have to trade [with Europe]… Sweden is a small country and we need to sell our stuff. But that doesn’t mean we need a European Union, or European legislation, that’s the problem with the Parliament and the Commission.” 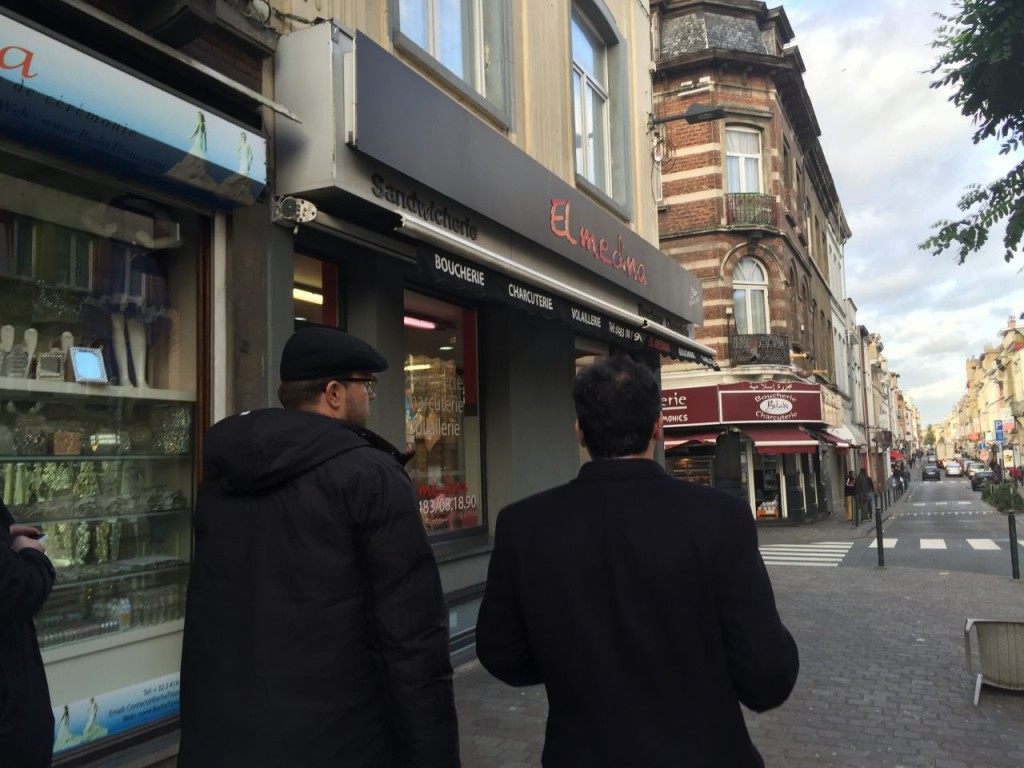 We walked together for half an hour around the Molenbeek area of Brussels, where the deceased “mastermind” of the Paris attacks is said to have been raised. It is unrecognisable as a place in Europe, and much as some residents insist that it isn’t as bad as the media portrays it, there’s no doubting a very sinister feel to the town.

In a group of ten, we all felt unwelcome and out of place. Women in our group were shouted at to cover their heads as we walked. They didn’t, of course.

“It looks like parts of Malmo in Sweden,” Jimmie told me. “It’s the same. The Arab signs and Arab people everywhere. The big problem is that we are getting used to it.

“I’ve heard a lot about this part of town in the last few days. I’m quite uncomfortable walking here because of what I’ve heard on the news. We have these places in Sweden too.”

Jimmie is quite clearly a small town family man who has hit the big time with a populist message. He told me how he was playing a gig with his new band in a local pub the night of the Paris attacks.

“I didn’t really understand it at first… I went home to bed. I didn’t really realise at first what really happened but of course in the morning there was shock, then the Prime Minister called me, and told me about the situation in Sweden and how the police and the security police handle the situation… he doesn’t call me very often so I understood that this was very exceptional.”

“There always is [a threat to me],” he said, almost reluctantly talking about his security arrangements. “I always have security,” he says, noting that he’s grateful for it.

“It’s important to me to stay where my roots are and my parents are and my family. I spend as little time as I can in Stockholm and go home as often as I can. I try to avoid this fame. But of course you have security guards everywhere you go… in the supermarket.. if you go to the dentist.. you go to the library to read, they follow you everywhere. Well that changed my life in a positive way because before I had them I was afraid. I stayed inside almost all the time. When I went out I had this hat and sunglasses to not be recognised. Now I can do whatever I want. It’s positive to have them around.”

Speaking about his home country, which has been transformed over the past few decades through policies of mass immigration and a large welfare state, he says it’s “quite good” that there now seems to be a debate about the issues as part of the wider, European migrant crisis.

“That is the big issue because it affects everything. Welfare, schools, healthcare, everything is now collapsing because of this huge immigration.”

But when asked if he thinks his party will get its way and that migration will be limited, he isn’t so upbeat.

“The progressives and socialists… they say its about helping people and we need to help because they are dying in those wars. We also want to help. But we can help in different ways. We want to help people near [their home countries] and they think we help best by taking them into Sweden. I don’t think they really believe that. It is about ideology. Socialists want to crush family values and nations. It’s a bigger thing. The liberals have the same view. Maybe the same thing. It’s ideology. They want cheap labour. That is what drives them to have this mass immigration. But now I think everyone has understood that you can’t do this anymore. We have 10,000 asylum seekers every week. For a small country like Sweden that is a very large amount of people. Something has to be done and everyone knows that now.”

“They’ve had the border controls now for 10 days but that has resulted in even more asylum seekers because now everyone that comes to the Swedish border has to seek asylum. And before the controls they could pass and go to Finland or Norway and they can’t do that anymore. We have to close the border and say ‘stop’. Eventually we’ll get there but maybe it’ll be too late, I don’t know.”

And then there’s the media. I ask him how he felt when the BBC called his party “Neo Nazis”.

“Maybe they don’t know better,” he says. It’s quite clear he likes to give everyone the benefit of the doubt.

“Of course its not correct and I don’t like it, it’s been a long time since anyone in Sweden called us that… for me, I know where I stand. I know what I feel, and my views, so I don’t care really.” 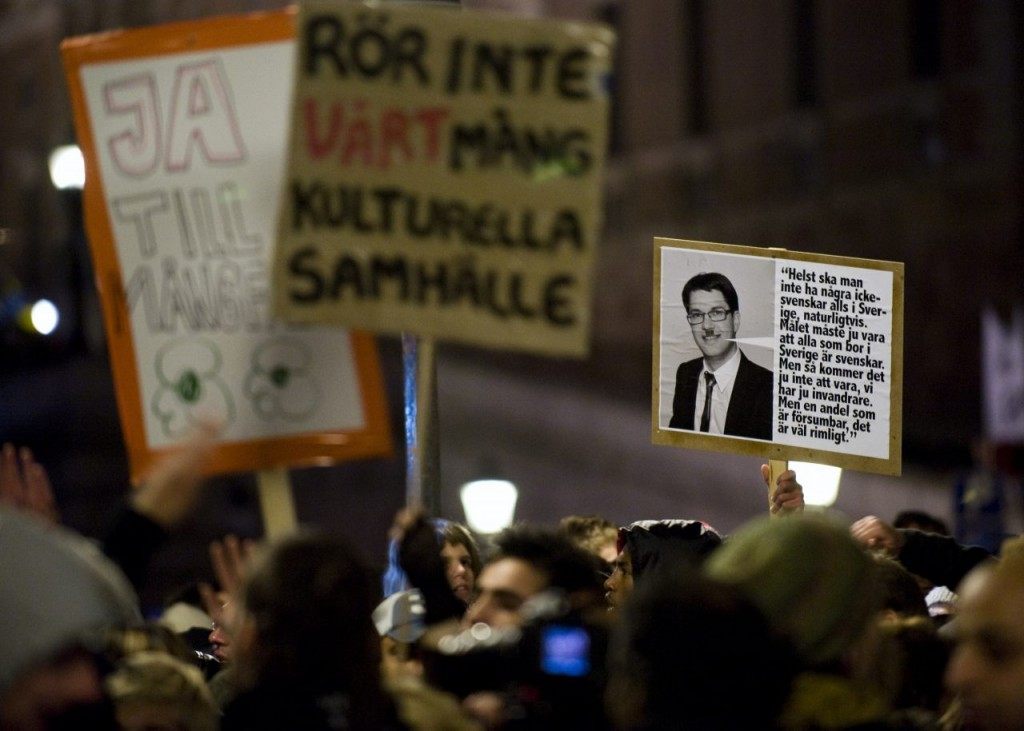 Jimmie has been the subject of protests in Sweden (Getty)

And just as the anti-Islamisation PEGIDA movement calls the press in Germany the “Lugenpresse” or “lying press”, Jimmie explains that the media in his home country rarely ever address the truth.

What, specifically, does he think is overlooked?

Almost every woman walking in Molenbeek was covered in a hijab. Almost every man in traditional, Islamic dress, replete with impressively-sized beards.

You could hear very little French and almost no English, unlike elsewhere in Brussels. I asked Jimmie if he thought the people we saw, or maybe their children, had a chance of integrating?

“No, I don’t think so. Not with the amounts of new immigrants and with the  integration policy we have in Sweden, they have no chance. They will segregate even more and there will be, from a Swedish point of view, a real Sweden… it will remain in the countryside in some parts, but the cities will be segregated and more and more like [Molenbeek].

Does he think there are more jihadists in the migrant wave coming to Europe?

“Of course there are at least thousands of them. Like in Sweden we have had large immigration for some time. They’re coming now and they came before. The issue now in Sweden is you have people born in Sweden going to the Middle East to fight for ISIS. You have the same problem in Britain.”

Jimmie Åkesson explained his party’s symbol to me, a blue and yellow ‘blåsippa’ flower. 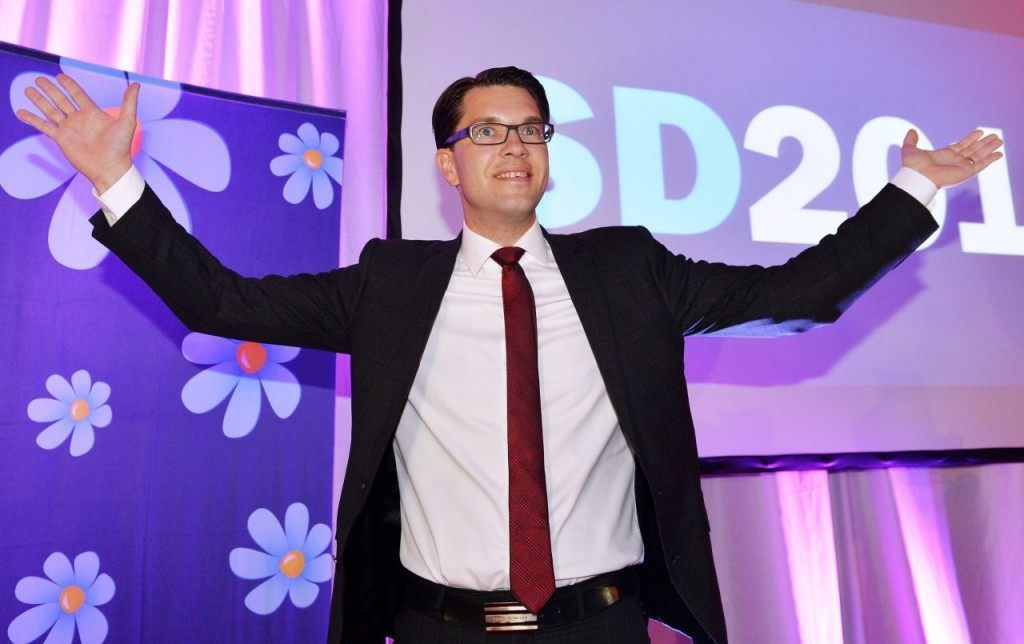 The Sweden Democrats blasippa flower on display behind Åkesson

“Most parties have flowers [in Sweden] there is only one that doesn’t. [The flower is] called a blåsippa, hepatica in Latin. It’s a very old flower. The roots have been in the ground for more than a thousand years. You can’t copy it. You can’t cultivate it. You only have the ones you have and there will be no more. We’re careful with this very old flower and you’re not allowed to pick it. It’s against the law, at least an unwritten law. We think that it’s the perfect symbol for our social conservative ideology.”

But he wasn’t overly complimentary about what some might see as his ideological bedfellows: the PEGIDA street movements, and U.S. Republican candidate Donald Trump.

“[PEGIDA] have made some attempts in Sweden to have those marches and that has not helped anyone. There have been like 20 people and a lot of and anarchists, communists throwing things, screaming, riots… that is not helping. Maybe it is in other countries but in Sweden we would prefer not to have that kind of thing.”

He added: “No I don’t have any favourite [in the U.S. presidential elections]. It’s not that interesting, I’m not sure it really matters who is the president. If Donald Trump won… I don’t think he will, I hope he doesn’t. He is very good at making speeches but as a politician and a world leader? No, I don’t think that’s a very good idea.”

Jimmie Åkesson is a thoughtful young man, who looks in his late-20s, and sounds like he’s in his mid-40s. What he might lack in Farage-esque charisma and boisterousness, he makes up for with disarming honesty. In him, the Sweden Democrats have a public face that could make serious strides in the country’s next elections. In the meantime, he’s going to keep playing with his heavy rock band in his local pub, and keep building consensus behind his ideals of social conservatism, and traditional values.