Mr. Hannan – a long standing advocate of the EU’s expansion into Turkey, and who is on the record as having stated “nothing would make me happier” than staying in the EU – asked me on Twitter when I last attacked Brussels [on this site] “instead of attacking Eurosceptics”. 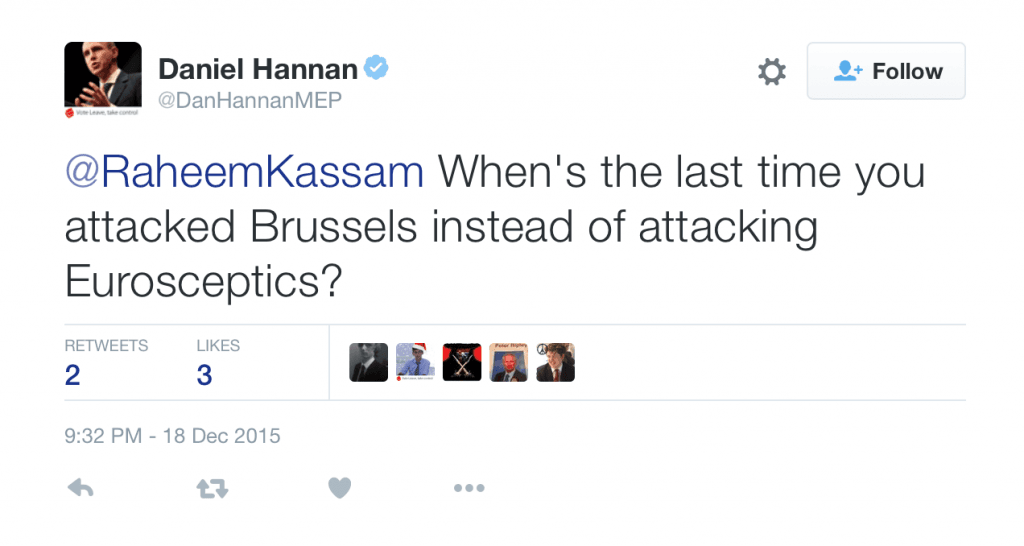 I suppose that means that Mr. Hannan isn’t a regular reader here. A shame, because if he was, he’d see anti-EU reporting in a way that his own political party, and his parish – the Telegraph – gave up long ago.

Well, Mr. Hannan – while Breitbart London does indeed attempt to hold pseudo-eurosceptics to account – those stories are few and far between. For instance, there was one article about your bestie, Mr. Carswell, today. One in November, and one in September.

There was one about you in July, and two in October (you’ll probably include this one, though you did ask a question, so I’m providing a thorough answer).

And there was one article about the increasingly concerning Matthew Elliott (your boss on the Vote Leave campaign) this month, one in November, three in October, and three in August. We’ve even reported favourably on some of Vote Leave’s activities.

So that’s 13 articles “attacking” pseudo-eurosceptics in 170 days. Out of around 2,500 articles published in that time frame on Breitbart London. Which is around 0.5 per cent of our output.

Now I’m not going to spend hours on end counting how many anti-EU articles we write. There are several a week, every week, and have been since we launched the site in February 2014.

There were three today, two yesterday, one on Wednesday, three on Tuesday, and sadly, none on Monday. That’s nine this week alone. That’d be 216 over the course of 24 weeks (168 days), or 11.6 per cent of our overall content – a 2200 per cent difference.

This will probably ramp up even further as we get closer to the European referendum. A referendum which I should point out that your party leader continues to conspire to scupper. And one which your cohorts are putting in jeopardy by repeatedly attacking one of the most popular political figures in the country.

So let me throw a few questions back at you:

1) When will your Vote Leave organisation accept Leave.EU’s offer for a merger?

2) When will you have the courage of your convictions to leave David Cameron’s Conservative Party – which is clearly working institutionally to keep Britain in the European Union?

3) When will your best friend, Douglas Carswell MP, stop attacking his own party and start campaigning across the board – not just with the establishment Vote Leave group – for an EU exit?

When your answer is “tomorrow” to all these questions, let me know, and you’ll be able to count on the full support of this website – and we’ll all be ready to work together for an EU exit. How does that sound?