Watching the news this morning you’d have thought we were actually labelling migrants and asylum seekers in the United Kingdom with big yellow stars, then prodding them off to the gas chambers. Wristband Macht Frei – the new slogan of the UK Home Office, if the one-sided media reports are to be believed.

People – and I say “people” – I really mean wealthy, hard-left, “open borders” activists are apoplectic that a Home Office service provider has asked asylum seekers in Wales to wear wristbands so they’d know which meals to give them for free. I’m sure a lot of you reading this wouldn’t mind wearing a wristband for three free meals a day – but that’s besides the point. Let’s look at the facts behind this story, and more importantly, the groups involved and their funding.

It is quite clear from the outset that the crimes the asylum seekers are alleging – mainly being shouted “go back to your country” at – are a load of old cobblers. They claim that they’re being abused by people driving past, because they’re identifiable by the wristbands. But I would suggest – whether it’s right or wrong – that they’re probably more likely being identified because they’re gathered in large numbers outside Lynx House – rented for them with our taxpayer money – causing a “nuisance”. There’s more about that here, but according to a neighbour of the hotel: ‘They are a nuisance just hanging around all day long with nothing to do. They congregate outside and clog up the pavements but apart from that they don’t seem to be any trouble”.

This isn’t a symptom of “racism”, but rather frustration – perhaps not constructively put across – by hard working locals who see their roads being turned into “Asylum Street” or “Immigration Alley” (their words, not mine) – in turn a symptom of the UK’s flimsy border control, left-wing activism, and the European Court of Human Rights’ demands that Britain accept all those “entitled to a family life” into Britain

Just take a look at some of the asylum seekers quoted across the media this morning, discussing the “racist wristbands”. Almogdad Abdeen – quoted as “Mogdad Abdeen” is actually signed up as a Citizens UK activist: 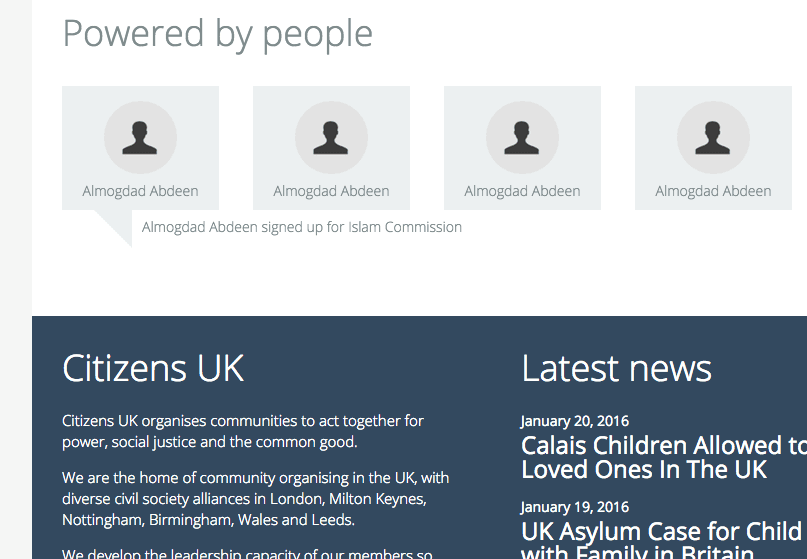 This is an umbrella group whose members are typically hard-left, open borders activists that travel to Calais and cause disturbances. Don’t believe me though, read the testimony from Calais residents. Watch the videos that emerge from these “solidarity trips” and look to the testimony of journalists who have noted: “the growing number of British anarchists living among the refugees. They say they have come to advise and show solidarity, although that solidarity clearly does not extend to sleeping in tents – they have their own caravans.

“They pretend to represent some sort of European ‘moral conscience’… The truth, though, is that they are bent on spreading tension in The Jungle – and violence.

“The main group is the predominantly British No Borders Network.”

The No Borders Network describes itself as “an anti-capitalist movement” and counts amongst its members “Calais Migrant Solidarity” and the “Anti-Raids Network” – the latter of which campaigns against the raiding of the homes of illegal immigrants. In other words – they don’t want British immigration law upheld. They want anarchy. 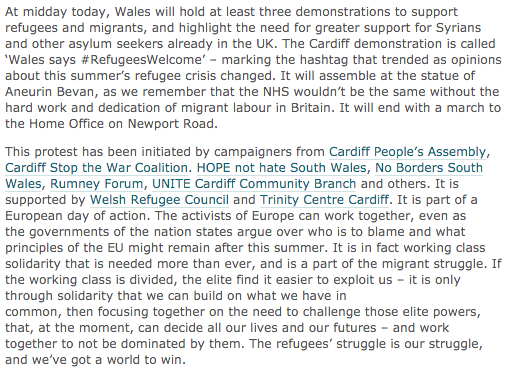 Collaboration between all the groups

But it’s much of a muchness until we link all of these groups, and indeed their funding sources.

THE FUNDING BEHIND THEM

Citizens UK – who ostensibly provided Mr. Abdeen as a spokesman on the wristbands story, received £225,000 from the Unbound Philanthropy group – a left-wing charity based out of the United States with its funding streams rooted in Wall Street hedge funds whose partners and clients benefit from cheap, migrant labour.

And they’re not the only ones. Here’s a list of pro-mass migration/open borders groups who take money from Unbound Philanthropy:

This is just a snapshot – a £1.6m snapshot – of recent funding into the UK from a foreign organisation seeking to dramatically change British immigration policy. Namely, to destroy it.

This is no more apparent than from the fact that Hope Not Hate, an anti-UK Independence Party (UKIP) front group that threw resources against the UKIP leader in his fight in South Thanet at the last general election, is also an Unbound Philanthropy beneficiary.

Did foreign money impact our election? I leave that for you to decide. But here’s the local Labour and Conservative candidates getting all lovey with a Hope Not Hate leaflet in South Thanet. But I digress.

Another of the groups pushing this “racist wristband” story is the Welsh Refugee Council – a sister organisation of the British Refugee Council (recipient of £15,000 of foreign money) which itself receives funding from the Labour-run Welsh government. And the Member of Parliament championing the cause? Jo Stevens, Labour, who also happens to be a Shadow Justice Minister, who serves to benefit from a negative story about Home Secretary Theresa May’s Home Office.

But both of these groups also receive direct funding from the UK Borders Agency – the Home Office. Is the Welsh Refugee Council a neutral charity? Just look at its homepage for evidence of how this is a political movement:

And the Welsh Refugee Council, linked to the “City of Sanctuary” movement which wants to make Cardiff, and Wales in the long-run, a “sanctuary” for all asylum seekers in the world – supports the Trinity Centre. The Trinity Centre is another group pushing today’s story. And the City of Sanctuary movement is another “charity” that has organisers involved who just so happen to have spoken out on this issue today. Eric Ngalle, another man quoted at length by the news outlets today – has spoken in support of the City of Sanctuary movement. Here is he, pictures with the Rocio Cifuentes, the director of the Ethnic Youth Support team who posts propaganda from the extremism-linked Friends of Al Aqsa organisation on her Facebook page. 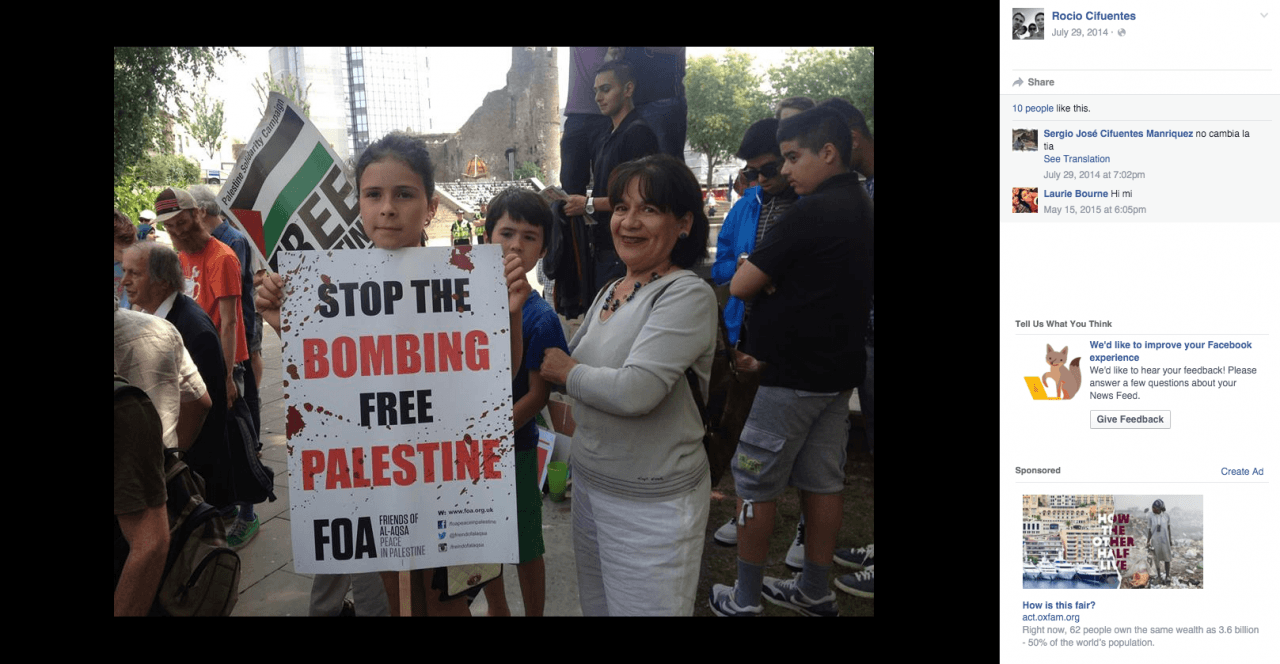 And the Ethnic Youth Support Team is in turn financially supported by: the UK Home Office, the National Lottery, the Welsh Government, the Department for Work and Pensions, South Wales Police, and of course… the European Union’s ‘social fund’.

That’s quite enough for now. But this is barely scratching the surface of how hard-left, foreign funded, government-backed groups are changing government policy through public ‘outrage’ activism. If you want even more of an idea of how this broad, open borders network operates… take a look at their own words from the Calais port “direct action” this weekend.

P.S. Do I believe migrants should be asked to wear wristbands to claim food? No. I think it was a stop gap solution because the agency involved was overwhelmed. Do I think it’s Nazism? Only if the Nazis provided free, city-centre housing, three hot meals a day, financial aid, educational assistance, and more… to moany migrants… which they didn’t.