Two Islamic State supporters who attempted to lure young people to Iraq and Syria with propaganda given out on London’s Oxford Street have been jailed for terrorism offences. 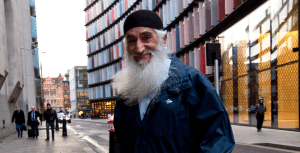 Shah Jahan Khan arrives at The Old Bailey on January 11, 2016 in London, England.

Islamic convert Ibrahim Anderson (pictured above), 38, and Shah Jahan Khan (right), 63, both from Luton, were identified as Islamic State supporters who handed out leaflets promoting the ‘caliphate’ from a stall outside Topshop’s flagship branch in Oxford Street.Convicted of inviting support for a proscribed organisation last week, yesterday the pair received their sentences from Judge Stephen Kramer QC.

He jailed Mr. Anderson, who also denied possessing information of a kind useful to a person committing or preparing an act of terrorism and has previous convictions for assault and possession of an imitation firearm, for three years. Mr. Khan, previously of good character, was sentenced to two years in prison.

Breitbart London was first to break the news of the shocking scenes on London’s busy Oxford Street back in August 2014. The men stood before signs which read “Khilafah [caliphate] The Dawn of a new Era” handing out flyers saying:

“After many attempts and great sacrifices from the Ummah of Islam throughout the world, the Muslims with the help of Allah have announced the re-establishment of the Khilafah and appointed an Imam as Khaleef.”

Judge Kramer said the pair’s activities could have lured young activists to their deaths in Iraq and Syria, reports The Guardian. He said:

“It’s clear you were at that location that day to promote and invite support of Isis by engaging with and trying to persuade passersby, and handing out leaflets. Both said in evidence you knew and know IS was a proscribed terrorist organisation. You were not there on that day simply to call people to Islam or Da’wah.

“It may be that stall had been there from time to time before August 9, 2014. However, in my judgment it’s also likely to have been no coincidence it was there that afternoon when many were leaving a pro-Gaza event and likely to pass.”