The BBC has been accused of “shameless” bias after telling staff to use the term “anti-abortion” rather than “pro-life”, while at the same time referring to abortion lobbyists as “pro-choice” as they “favour a woman’s right to choose”.

The broadcaster’s official style guide says of those who favour of abortion:

“Avoid pro-abortion, and use pro-choice instead. Campaigners favour a woman’s right to choose, rather than abortion itself.”

It then tells staff to avoid the term “pro-life” and use “anti-abortion” instead. It does not give a reason why. 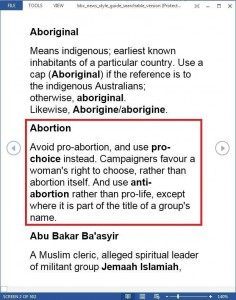 The guide, which applies to thousands of BBC journalists across the world, has been slammed by pro-life campaigners who have called it a “violation of journalistic objectivity” and accused the corporation of “gross ignorance”.

The BBC’s charter agreement requires it to be maintain impartiality on all controversial issues, with section 44 saying the corporation must “do all it can to ensure that controversial subjects are treated with due accuracy and impartiality in all relevant output.”

Peter D. Williams of campaign group Right to Life told Breitbart London: “The BBC’s ‘News Style Guide’, is an utterly shameless example of institutional bias against the right-to-life movement, and for the abortion lobby.”

“They have entirely ignored the standard terms for the right-to-life position, and reduced it – without any reason given – to simply being ‘anti-abortion’. This is a rhetorical tactic, and an explicit violation of journalistic objectivity that is utterly unacceptable in a public broadcaster.

“Whether or not BBC bias on life issues is unconscious or pathological, this document shows that is systemic, and that the BBC staff who composed it either cynically or in gross ignorance have stacked the language of the debate in abortion lobbyists’ favour.

“The BBC must reverse this policy, and apologise for their utter lack of consultation and fair-mindedness in forming it.”

The BBC told Breitbart London: “Our aim is to report impartially and we use the terminology that most accurately reflects both sides of the abortion debate.”