The Sunday Times, owned by the open borders funder Rupert Murdoch, has today published an extraordinary claim that Former British Prime Minister Margaret Thatcher would campaign to stay in today’s European Union – a fact that is easily dismissed with even a cursory glance into the most recent statements by the late PM. 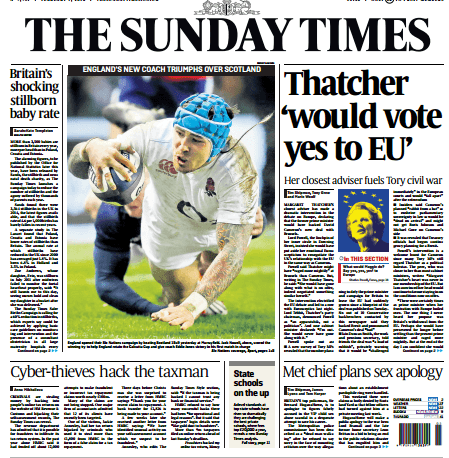 The Times – which has recently come under fire for allegedly breaching an impartiality promise by Mr. Murdoch himself – splashed on its front page this morning: “Thatcher ‘would vote yes to EU'”, publishing a claim made by one-time Thatcher advisor Lord Powell, who went on to become former Prime Minister Tony Blair’s special envoy in to Brunei.

The Sunday Times claims (£): “She would have gone along with what is on offer, indeed negotiated something similar herself.”

While Prime Minister Thatcher was originally a well-publicised advocate of the European Common Market, Lord Powell’s claims belie Lady Thatcher’s assertions in later life, specifically what she wrote in her book Statecraft from 2003 which was summarised in abstract as stating: “..in this book Thatcher… [argues] in essence that Europe is always to be distrusted because it is full of Europeans and in her lifetime Europeans have always caused trouble.”

Indeed her book was serialised in the Times itself, which quoted her as having written: “It is frequently said to be unthinkable that Britain should leave the European Union. But the avoidance of thought about this is a poor substitute for judgment.”

She added, as you may well hear UKIP’s Nigel Farage often remark: “the blunt truth is that the rest of the European Union needs us more than we need them”.

A review in the Daily Mail in 2002 stated: “Lady Thatcher warns of an apparently unstoppable drive towards a European superstate and calls on the U.S. to save the Continent from itself.”

She wrote: “It remains for the non-European world, above all America, to try to reduce the harm the new Europe is set to do – and then when the folly falls, as through lack of common interests it finally will, to help pick up the bits.”

Her comments were rounded off in 2013 by her official biographer, Charles Moore, who revealed that “Lady Thatcher had come to the view that Britain should leave the European Union,” adding: “advisers had persuaded her that she should not say this in public since it would have allowed her opponents to drive her to the fringes of public life”.

In the book, she lauded former Tory Minister Enoch Powell, saying that he was right to warn in the 70s that joining what was then deemed the European Common Market “involved an unacceptable loss of national sovereignty”.

So how could Mr. Murdoch’s paper benefit from making such a sensational and demonstrably false claim on its front page this weekend? Perhaps the same as its sister paper, the Wall Street Journal, when it urged in 1984: “If Washington still wants to ‘do something’ about immigration, we propose a five-word constitutional amendment: There shall be open borders.”

And is it a coincidence that banking behemoths Goldman Sachs and JP Morgan have handed over six figure sums to the ‘Stronger In’ campaign not long after the same banking giants joined with Mr. Murdoch’s “Partnership for a New American Economy” organisation which urges open borders and lobbies for the Trans-Pacific Partnership: effectively a European Commission for Asia-Pacific and the United States?

One thing is becoming increasingly clear. During this referendum on Britain’s membership of the European Union, the establishment will pull out all the stops to try and convince Britons to vote to remain in an expansionist, European superstate with no borders. The best defence is to share the facts.