Violence has flared in one of the many Paris migrant ‘transit camps’ that have flourished in the city this week, with special police deployed to quell the riot.

Angered migrants threw missiles and charged one another with iron and wooden bars at the Stalingrad Metro on Thursday night, with the chaos caught on camera by the inhabitant of a neighbouring apartment. The extraordinary violence is reported to have started when a drunk man threw an object at the migrants, who returned in kind by throwing street furniture and strips of metal, reports Le Parisien.

Specialist police of the undercover ‘Anti-Crime Brigade’ were called to the scene, and riot police showered cannisters of tear-gas down on the rioting migrants to clear the area. The men being repulsed were primarily of Eritrean, Sudanese, and Afghan origin.

Despite claims in some British media that anti-migrant vigilantes may have been involved, French reports state police are still unaware of what triggered the fight, although the possibility of disputes over territory or conflicts imported from foreign war-zones may be to blame.

Breitbart London reported on the under-bridge migrant camps in May 2015, which had sprung up as a convenient transit-point on the route north to Calais, and then on to Britain. The number of men living in the tents under the railway bridge was then 500, but it has recently swollen to 1,000 as French police cleared the migrant camps at Calais, causing the illegals gathered there to disperse. 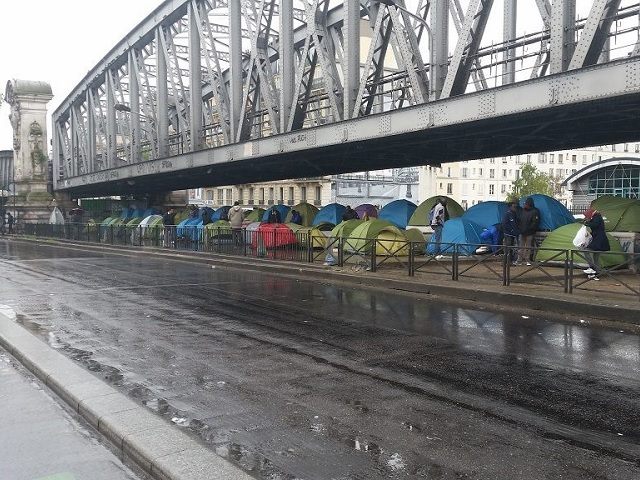 One of Paris’s under-rail migrant camps, pictured last May

The existence of the insanitary camp has been supported by local pro-migrant charities, which have provided old mattresses and tents for the illegals to live in. Chemical toilets are also provided to prevent worse fouling of the environment.