PEGIDA organizer Tommy Robinson has agreed to debate the head of the British Muslim Youth (BMY) in Rotherham, on whether or not Islam is responsible for the over-representation of Muslims in rape gang scandals.

“Tommy Robbinson, I’m ready for you,” Muhbeen Hussain, the founder and chair of BMY told Breitbart London. His organization is based in Rotherham, and was set up on the anniversary of the 7/7 London bombings to “promote the real teachings of Islam”.

They rose to prominence in October last year, after inciting a Muslim boycott of South Yorkshire Police and threatening to boycott any Muslim shop or organization that continued to work with the police. 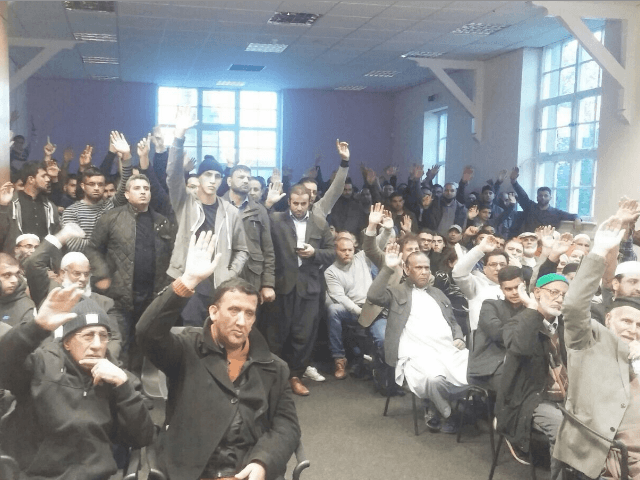 They have also lobbied for more influence over local policing and attempted to block today’s PEGIDA walk from taking place with the power the won.

Mr. Hassan has argued that Muslims were “stigmatized” after the Rotherham rape scandal, and accused the police of spreading “pernicious lies” that it was a fear of being called “racist” that stopped them tackling Muslims rape gangs in the town.

In August 2014, the Government’s Jay Report concluded that 1,400 vulnerable, underage girls were groomed, drugged, abducted, assaulted, and violently raped over a period of more that ten years by scores of Muslim men in the town.

The scandal, the report said, had been allowed to go on for so long because of a “culture of fear”.

Tommy Robinson told Breitbart London the men had tried to debate before, and agreed on many things. He said: “When we set this demonstration up I tried to contact the leader of the British Muslim Youth in Rotherham. I tried many times, I even spoke to the police to set up a meeting with him.

“He’s a young lad that I’ve spoken to before and in fact some of his stances I completely agree with and support [such as] his stance against sexual exploitation.”

Mr Robinson entered the anti-Pegida rally site- attempting to provoke people. He was met by only a message of peace! pic.twitter.com/f0LmeyUrGh

Mr. Robinson continued: “Our difference is where the problem comes from and why it’s happening. I’ve offered him, and we tried before but the police shut it down, to hold an open debate. These difficult conversations have to happen, people have to be allowed to talk about this issue on either side.

“I want to sit with him at a table and I want to debate and argue this issue. I want to debate that Islam is responsible and inspires and is part of the reason why we see these huge over representations of percentages of Muslim men raping non-Muslim girls.”

Mr. Hassan said he was happy to meet and debate the founder of the English Defense League: “We met with Tommy Robinson today. We met with him, I sat down and we spoke peacefully.

“We said look we believe in democratic values, what we don’t want is local town centres, local businesses being affected.

“I’m ready to debate him on this topic of grooming and Muslims and I am ready to challenge him.

“Tommy I’m ready for you, whenever you want to debate, you set the day I’m there. I’ll come and I’ll debate you.”

Mr. Robinson said they were going to set a date for the debate, and if the police blocked it they would have it on the streets.

“When I saw him this morning the first thing I said to him is let’s get the debate on, let’s set a date and let’s debate it.

“What happened last time was the police think they will get rid of the problem by cancelling venues, they’re not. You can’t push this problem underground, you “need to have an open debate about it, which is what we’re trying to do like adults”, he said, adding: “If they don’t let us get a venue then I’ve said we’ll do it on the streets of Rotherham.”