The ITV producer behind the attempt to portray Brexiteers – those supporting Britain leaving the European Union – as “only” older people, has a track record of anti-Leave rhetoric, Breitbart London can reveal.

On her Twitter profile which she uses to solicit interviews for ITV News, Rachel Bradley has tweeted a number of messages mocking and deriding Leave campaigners, especially targeting UKIP leader Nigel Farage and heaping praise on the most prominent Remain campaigner, Prime Minister David Cameron. 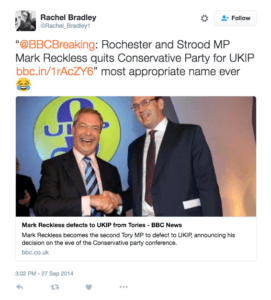 Earlier today Breitbart London revealed how ITV was attempting a “stitch up” debate, pitting young Remain advocates against “over 60” or “mature” Brexiters. Leave campaigners said this was an overt attempt to make the Leave campaign look old and unattractive.

Going back as far as May 2014 Ms. Bradley tweeted her political views.

She appeared to celebrate Mr. Farage being assaulted while in Nottingham on May 2nd.

She said on September 27th, when tweeting about Mr. Reckless joining UKIP: “most appropriate name ever “.

Soon after, in December, she was promoting an Independent article about a “blue haired shouty lady who gave Farage what for last night [at BBC Question Time]. The blue haired lady in question is none other than hard-left anti-UKIP activist Bunny La Roche, who followed Mr. Farage around during the General Election campaign in 2015.

In May 2015 Ms. Bradbury tweeted: “Why does the BBC’s election studio look like [Britain’s Got Talent]?! I’m expecting him to press a big red button any time soon (preferably on Farage)”. 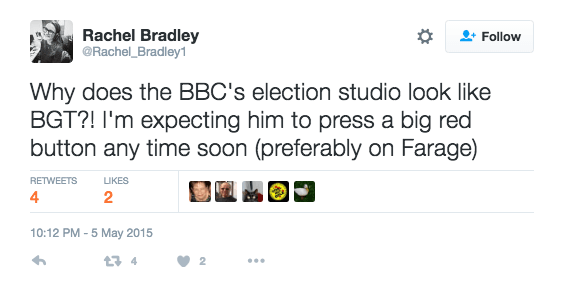 And she attacked the UK Independence Party in November 2015, posting a link about David Coburn MEP with the comment: “UKIP you’ve out-UKIPPED yourself today.”

But her most recent attacks have perhaps been the most concerning considering her position as a news producer for ITV.

On the night of the most recent Farage vs Cameron town hall events, she said at 9:11pm: “Less of the patronising tone please Nige” followed by, just after the programme: “Well I learnt Cameron’s manners are near impeccable and Nigel’s need work. Excellent audience throughout. Can I vote for some of them?”

It is not known to whom in the audience Ms. Bradley is referring, but Breitbart London recently exposed that the ITV producer-picked audience contained a black supremacist Huffington Post blogger who is a long-standing advocate of remaining in the European Union.

An ITV spokesman said of the debate which was set to pit young Remainers against mature Leavers: “As is standard practice in a newsroom, we research a number of ideas each week – some make it to air while others don’t. In this instance, the idea was not developed for broadcast.”

ITV has not yet responded to comment asking about the level of bias expressed by Ms. Bradley.