The UK Independence Party (UKIP) will today launch the largest national advertising campaign of the European Union referendum so far, starting with a stark warning over mass migration into Europe.

The newest poster, entitled ‘BREAKING POINT’ uses a picture of migrants pouring into Slovenia, a country that entered the European Union in 2004 and has, unlike Hungary or Austria, broadly failed to control its border.

Nigel Farage and other senior UKIP figures are reported to be on location in Smith Square, the home of the European Union in London, to unveil the poster on advertising vans.

Breitbart London understands there will be 10 poster trucks as well as the UKIP Battle Bus blaring out the theme from the Great Escape. 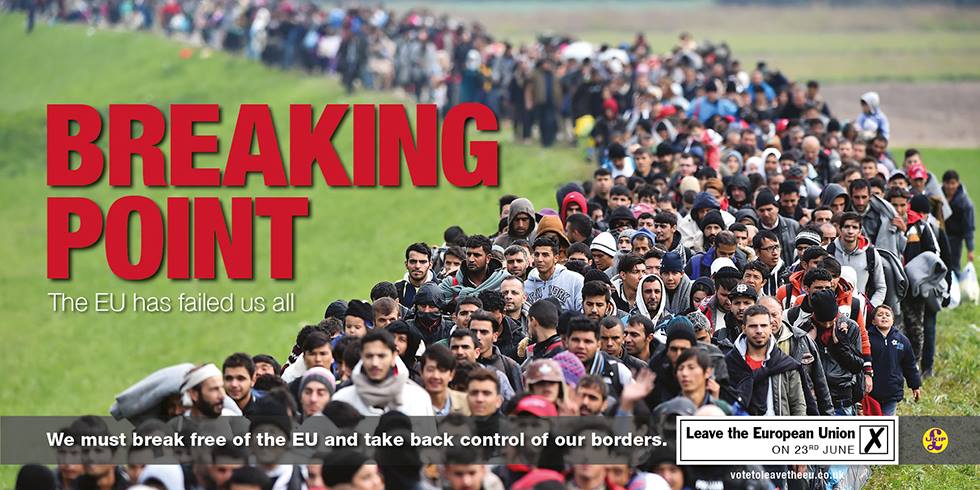 Across the European Union, member states have different rules for how long it takes for newly arrived migrants to obtain EU passports and therefore become able to move freely around the continent, including to the United Kingdom.

A new study suggests that Britain’s population may rise to 80 million within the next few decades as a result of mass migration.

Yesterday, a Liberal Democrat Lord, Baroness Smith of Newnham declared that EU membership was good for Britain because it allowed Europe’s unemployed to come to Britain.

Migrant employment rates across Europe have consistently disappointed authorities, especially in Germany, where special jobs fairs have been held, as well as government funded English language and Western etiquette classes have been promoted to try and help people integrate.

The policies, however, appear to have been to no avail. Not only are migrant employment rates poor, but migrant crime rates are soaring, with a disproportionately high number of thefts, picket pocketing, sexual assault and burglary committed by migrants.

The poster also appeared in major national newspapers in the UK today, including the Telegraph, the Daily Star, and the Daily Express.