Just days after the British people voted to regain their independence from an unelected bureaucracy, campaigners in Hong Kong have launched a political party agitating for the city to be returned to British rule as a transitional stage towards independence.

Billy Chiu is a young campaigner who first rose to prominence three years ago when he waved the British colonial flag in protest at Chinese rule, having broken in to a military facility. Today, he called a press conference to announce the launch of the Alliance to Resume British Sovereignty Over Hong Kong and Independence. 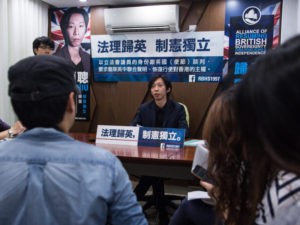 He and his fellow activists believe that it will be easier to secure independence from Britain than it will be from China. “An independent nation is Hong Kong’s only way out,” Mr Chiu said.

Hong Kong was formally handed back to Beijing by the British in 1997, with the Sino-British Joint Declaration ostensibly preserving its liberties for 50 years. But there are growing concerns that freedoms enshrined in the agreement are being steadily eroded by the Chinese Communist Party, leading to increasingly vociferous calls for true independence.

The declaration is intended to enshrine “one country, two systems”, but protestors see creeping encroachments by Beijing undermining that system, with matters coming to a head recently following the arrest of five booksellers who had been selling publications critical of Beijing.

The Alliance is the second to launch with the aim of secession from China in just three months, after the Hong Kong National Party launched in March.

The leader of that party, Joshua Wong, is another young campaigner who again made headlines as the face of the Umbrella Protests, when thousands of people took to the streets to demonstrate against Beijing’s apparent interference in elections for Hong Kong’s chief executive.

“Within 10 years we hope to decide self-determination and have a referendum on the sovereignty of Hong Kong after 2047,” said Mr Wong, referring to the end of the 50 year Declaration period.

“Whether Hong Kong will adopt ‘one country, one system’, or ‘one country, two systems’ or independence, we will let Hong Kongers determine the future of Hong Kong rather than the Chinese Communist Party,” he told The Telegraph.